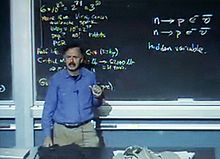 Richard A. Muller has an article in today’s New York Times about his conversion from Climate change denier to acceptance of the reality of man made climate change.

Who? He is a noted American professor of physics at the University of California, Berkeley and is also a faculty senior scientist at the Lawrence Berkeley National Laboratory.

Three years ago I identified problems in previous climate studies that, in my mind, threw doubt on the very existence of global warming. Last year, following an intensive research effort involving a dozen scientists, I concluded that global warming was real and that the prior estimates of the rate of warming were correct. I’m now going a step further: Humans are almost entirely the cause.

Tempted to think that he is simply jumping on a popular bandwagon, well think again, because that is not why he has changed his mind …

My total turnaround, in such a short time, is the result of careful and objective analysis by the Berkeley Earth Surface Temperature project, which I founded with my daughter Elizabeth. Our results show that the average temperature of the earth’s land has risen by two and a half degrees Fahrenheit over the past 250 years, including an increase of one and a half degrees over the most recent 50 years. Moreover, it appears likely that essentially all of this increase results from the human emission of greenhouse gases.

These findings are stronger than those of the Intergovernmental Panel on Climate Change, the United Nations group that defines the scientific and diplomatic consensus on global warming. In its 2007 report, the I.P.C.C. concluded only that most of the warming of the prior 50 years could be attributed to humans. It was possible, according to the I.P.C.C. consensus statement, that the warming before 1956 could be because of changes in solar activity, and that even a substantial part of the more recent warming could be natural.

Our Berkeley Earth approach used sophisticated statistical methods developed largely by our lead scientist, Robert Rohde, which allowed us to determine earth land temperature much further back in time. We carefully studied issues raised by skeptics: biases from urban heating (we duplicated our results using rural data alone), from data selection (prior groups selected fewer than 20 percent of the available temperature stations; we used virtually 100 percent), from poor station quality (we separately analyzed good stations and poor ones) and from human intervention and data adjustment (our work is completely automated and hands-off). In our papers we demonstrate that none of these potentially troublesome effects unduly biased our conclusions.

This is indeed a man to applaud for multiple reasons, but specifically for being truly scientific …

You can read the full NYT article here.

Now, as an unrelated aside, he has a series of his Berkeley lectures on You Tube (posted by the university). This is where he teaches a synopsis of modern qualitative (i.e. without resorting to complicated math) physics, and this course is one of the most highly regarded courses at Berkeley.