If you have ever debated with a deeply religious person, then perhaps you have come across the picture below, or some variation of it … 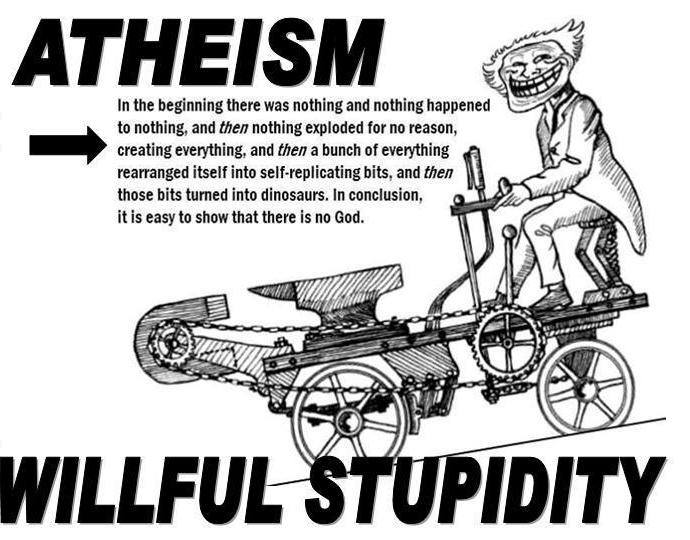 Initially, you might be tempted to counter with, “Ah so you simply believe that god did it all by magic“, or similar … but if you do then you will be faced with glazed eyes as they rapidly scramble to simply ignore that come-back and make the leap to some other topic such as Evolution.

But don’t do that, instead pause and consider what is going on here.

The proposal is that you do not accept the “god-did-it” assertion, and must instead by default “believe” the above. Now that there is the problem summed up – note the use of the word “believe”, coupled with an assumption that you simply must “believe” something about the origins of the universe, and that you must have an answer … any answer … and that “I do not know” is not a viable option.

To illustrate this, here for example of how a recent dialog with a Muslim panned out …

Believer: any of you atheist , tell me what you believe about this universe.. does it come from nothing

Me: Generally … Atheists do not just “believe” stuff, they look for evidence

Believer: what evidence are talking about , tell me simply what you believe leave science a way at a side

Me: most are content to stick with the scientific consensus. There is stuff we know, and have evidence for … anything beyond that is unknown.

Believer: we all know we are here , im asking you what you believe about our existence, are this universe come from nothing

Me: What does the current scientific consensus say … if you for example asked a cosmologist, what would you be told?

Now note his insistence that science should be put to one side, and that I just must tell him what I “believe”. Here is the assumption that everybody must “believe” something , and that the very idea that there are specific questions for which we do not have an answer is simply out of scope, and not considered a viable option.

So the conclusion I have come to after many such conversations, is that the only real way to progress such a conversation is to not tell people what to think, nor to score a few points with a smart rebuttal or reverting to the provisioning of missing information, but instead ask questions …

Why do you think Atheists “believe” that?

What does science actually tell us about this question?

That way you can enable people to start working these things out for themselves, and by doing so, gain some personal ownership of the answer achieved.

So what does science tell us about the Origin of the Universe?

So was that point the actual origin of the universe … or … is the universe in some way eternal and that expansion was simply the start of the universe manifesting itself in it’s current form, or was our universe given birth from inside a black hole in some other universe, or … well you get the idea, it is all simply speculation at the moment.

In essence: the big bang model appears to explain the observational data (the expansion of the early universe as we know it) and as for anything beyond that, we simply do not know.

There are things we know and things we do not know. Beliefs tend to hang around on the border between both and then point out into the void of the unknown and declare “God did it”, on the basis of exactly zero evidence. It is like this because the psychology we have evolved with motivates us to grasp for control of the world around us, and one means we have for doing this is to attribute events beyond our control to gods, and by doing so gain the illusion of control by simply obeying the rules that we think these gods play by.

The alternative, that there is no god, is simply too frightening for many to come to terms with, but some do manage it very well.

“I think it’s much more interesting to live not knowing than to have answers which might be wrong. I have approximate answers and possible beliefs and different degrees of uncertainty about different things, but I am not absolutely sure of anything and there are many things I don’t know anything about, such as whether it means anything to ask why we’re here. I don’t have to know an answer. I don’t feel frightened not knowing things, by being lost in a mysterious universe without any purpose, which is the way it really is as far as I can tell.” ― Richard P. Feynman