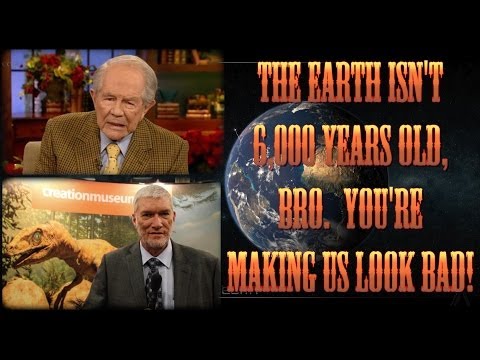 This has simply got to be one of the most bizarre attempts at public dialog I have ever come across.

On one side we have Ken Ham, the rather well-known creationist who believes the world is only 6000 years old (yes really just 6000 … despite the fact that we have trees older than that).

On the other side we have Pat Robertson, the rather weird right wing former Baptist minister who regularly comes out with some truly bizarre pronouncements on his TV show the 700 club. For example we have recently learned, that an atheist who refuses to believe has a demon, that humanists caused Nazism, that atheists are Satanic, etc…, there is lots more)

So anyway, the story is that these two are going head to head and are currently having a very public spat …

Creation Museum founder Ken Ham is once again furious that Pat Robertson has mocked proponents of Young Earth Creationism, and now wants to appear on the “700 Club” to debate the televangelist.

Ham, who recently held a debate with Bill Nye, said in a blog post today that he is willing to debate Robertson either on the “700 Club” or at Regent University, the school founded by Robertson.

I wonder if Pat Robertson would be prepared to discuss these issues with me or one of our AiG scientists on the 700 Club? Or maybe in some sort of debate format at Regent University? We are certainly willing to do that—maybe all of you reading this could challenge CBN/Regent University to allow such a discussion, debate, or forum to occur publicly. I wonder if Pat Robertson, who is allowed to state these things so publicly through CBN will agree to have his statements publicly challenged and tested!

Should such a debate take place, then I simply cannot even begin to imagine how it would play out, because here are two well-known kooks for whom critical thinking is such a foreign concept that if they made a phone call back to reality, it would not just be a local call, but would instead involve international dialling codes.

So will it actually happen?

Ken would love to have it happen because he desperately needs the money for his floundering folly. He is currently investing millions into building a replica of Noah’s ark and got a real funding boost after debating Bill Nye, so would love to repeat that … not to establish his position as the right one, but rather just for the $$$ it will generate for him. How will this pan out? It will bankrupt him.

Pat Robertson, will have no interest in a debate, he is very wealthy and does not need the $$, and has all the publicity he wants with his weekly TV show, so no … this is not going to happen.

This is not just about what two eccentrics think, because if you look at the 2009 poll, you discover this …

In other words, there is in reality a huge gap between the scientific consensus and the public – now that is truly frightening.

Cosmos could not have come at a better time, we really need it.