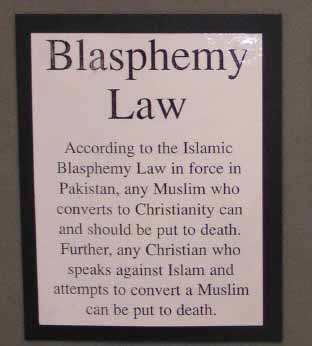 A petition asking the UN High Commissioner to abolish Blasphemy Laws has been launched, the details are …

We the signers humbly ask you to consider both a human rights petition and concern shared by a growing number of people persecuted for non-belief in religious dogma, including millions of atheists and agnostics around the world. Both the petition and the concern regard the proposed enactment and enforcement of so-called blasphemy laws and their offshoots such as defamation of religion and religious-insult “hate speech” legislation in member states. The reality is that these blasphemy laws and “hate speech” legislation violate the cornerstone rights of freedom of expression, thought and conscience, tenuously upheld by the International Covenant on Civil and Political Rights (1976), Articles 18 and 19 in particular.

Our petition, which has been linked below, appeals to the United Nations to amend Articles 13 (b), 55 (c) & 76 (c) of the Charter of the United Nations and the Statute of the International Court of Justice to include the non-religious as an expressly protected group.

The very concept of Blasphemy conflicts with basic human rights, specifically “Freedom of Thought”, either people are free to hold a believe or non-believe … or … you police what they think. What you simply cannot do is have both, they are mutually exclusive concepts.

What is even crazier is that nobody is innocent, because everybody is committing some form of blasphemy. Let me illustrate that for you …

So essentially there are no exceptions to this concept in its truly pure form, because everybody is guilty.

In reality what actually happens is that one specific variations of belief will utilise blasphemy laws to enforce their specific belief as “truth” and so all other variations will be deemed “blasphemy”. In fact the subtle word game that gets played is that other variations of belief are almost tolerated, but if there is any vocal criticism, then thats it, the blasphemy law is wheeled out and comes down upon you like a ton of bricks.

In Pakistan we can see the results of enforcing Blasphemy laws, a land where prominent figures like Salman Taseer (the former governor of Punjab) and Shahbaz Bhatti (the Federal Minister for Minorities) have been assassinated for their opposition to the blasphemy laws, and where every minority belief is being oppressed.

In every other sphere of normal human activity, robust criticism is the accepted norm, you can happily criticise other sports teams and if your friends happen to support those team then they will still be your friends and will not seek to murder you. You can also happily criticise other political parties without fear of legal repercussions … yet when it comes to religious belief, simply embracing a minority belief or non-belief is deemed by some nations to be a crime called blasphemy and merits death.

By every measure, there is wrong because only people have rights … ideas don’t… and so it is time for us to live it a better world, one were all humans are free to believe whatever they wish without fear.


The Petition is here.