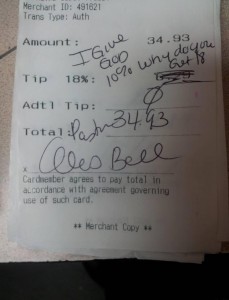 This one has gone a bit viral in some quarters so you might (or might not) have come across it.

The core story is that a pastor stiffed a server in a restaurant by writing on the bill, “I give God 10%, why should you get 18%” and left no tip at all.  So far so what … well, the server posted it on Reddit (you can see it there on the left) and it went viral.

UK folks, for a bit of background context, tipping in the US is a big deal, in the UK it may indeed be an expression of appreciation for really good service, but in the US servers do not get paid very much and so the expectation is that a tip is very much anticipated and expected, and only a complete twat would not tip. About 20% is also the norm, personally I’d be embarrassed not to do 20%.

So first question, is this a hoax, or did it really happen? It is of course valid to be skeptical, somebody might indeed have done it as a joke to stir things up, but no, it is all quite real, the pastor has been named as Alois Bell. She is quoted as saying …

Funny how when caught, there is an expression of sorrow, it always strikes me that the sorrow was the reaction to being caught and not about the actual action itself.

So this goodly “loving” pastor called up the restaurant and demanded that they fire the server for posting it to reddit.  Chelsea, the server explains …

“I originally posted the note as a lighthearted joke,” says Chelsea, who was dismissed from her job at Applebee’s on Wednesday, as the story began to spread across the Internet. “I thought the note was insulting, but it was also comical. I posted it to Reddit because I thought other users would find it entertaining.”

Ah but wait, Chelsea was actually not the receiver of the bill, the server on the receiving end of the note showed it to Chelsea, who snapped a photo of it later that night, her crime was to post it. It was not really a cool move on her part to do that, she should have at least blacked out the name, but also not cool for the pastor to push for her to be fired.

To explain, the following statement was released:

Our Guests’ personal information – including their meal check – is private, and neither Applebee’s nor its franchisees have a right to share this information publicly. We value our Guests’ trust above all else. Our franchisee has apologized to the Guest and has taken disciplinary action with the Team Member for violating their Guest’s right to privacy. This individual is no longer employed by the franchisee.

So why is this a big deal. Well, the servers there earn… (prepare yourself) … $3.50 an hour, so if they don’t get tipped, then they are not losing a bit extra, their core income is not being paid. Chelsea comments,  “I come home exhausted, sore, burnt, dirty, and blistered on a good day. And after all that, I can be fired for ‘embarrassing’ someone who directly insults their server on religious grounds.”, so if you stiff them on the tip, it is a really really big deal.

I do want to make one further very important key observation here, none of this has anything to do with belief or non-belief. Yes it was a pastor who did this, but that says very little about the belief and instead says a great deal about Ms Bell’s basic humanity.

An important observation in life is that if you really want to know if somebody is truly a decent human being, that don’t judge them on how they treat you, but rather judge them on how they treat others for whom they have no ownership in being nice to them, for example how do they treat servers. If they do not behave decently and honorably to a server in a restaurant, then I would argue that are not decent human beings.  That applies to human as individuals regardless of their belief or non-belief, it is not the belief that matters, but the actions.

Well who can resist, you must admit, using God as an excuse for not tipping does invite a response such as the following … 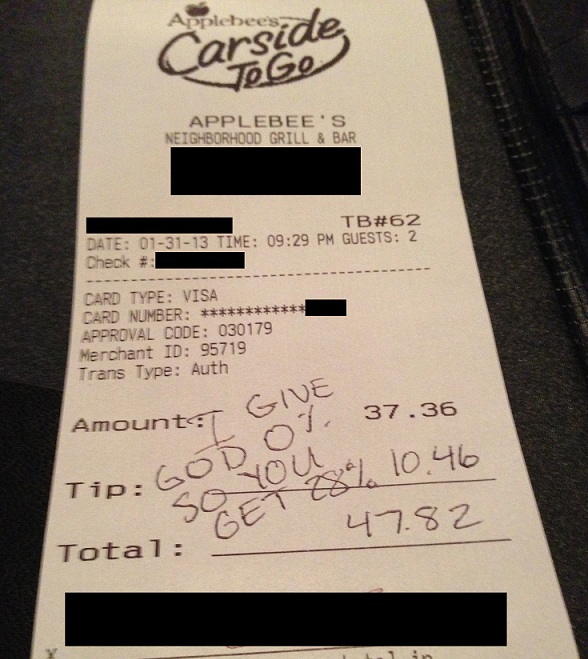