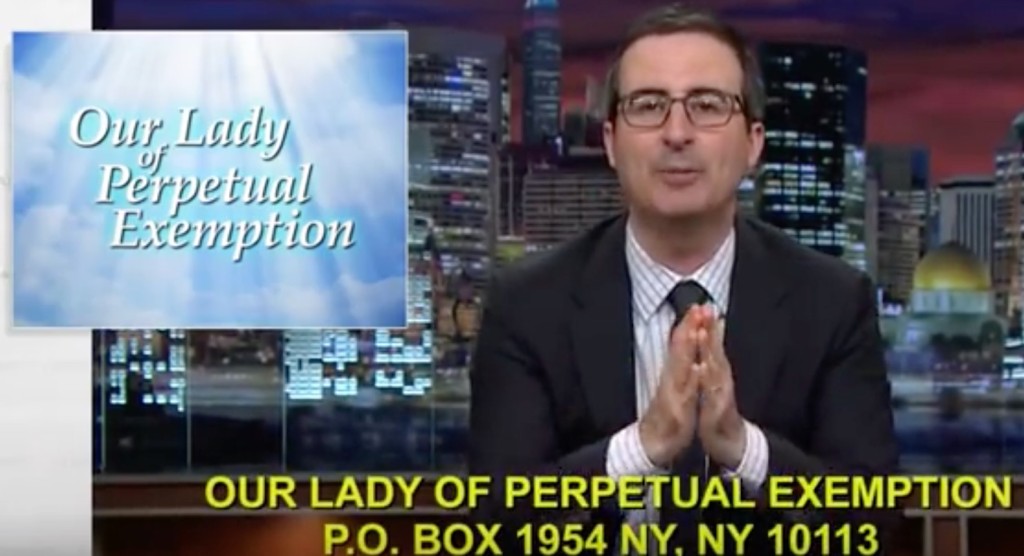 You might, or might not, remember that John Oliver did a segment on the property gospel fraudsters who basically use religious belief as their very own get-rick-quick scam and happily prey upon the desperate and the gullible (I pointed you at the clip on that a couple of weeks ago). His show is one when he basically uses humour to criticise the utterly absurd and so to drive the point home he set up his own church called “Our Lady of Perpetual Exemption” and asked for donations.

USA Today article on it all is here

The point was of course to illustrate that anybody could setup their own church and thus avoid tax, however he did also ask for donations, and so here is what happened …

[OK, so HBO has asked for the ability of the clip to be embedded to be disabled – so here is a link instead]

So the punchline here is that they have received rather a lot of donations, but worry not because it will all be going to charity …

“For those of you who have sent US currency, blessings unto you. We have received thousands of envelopes with thousands of dollars—some featuring heartwarming notes, such as this $5 bill with the message, ‘Take my seed, you rat-faced bastard,'” Oliver quipped.

“We also received multiple checks, including this one for $65 billion, which you may have sent in as a joke, but guess what? We’re cashing it. So who’s laughing now?” he added.

Not only that, Oliver’s mock church also received a lot of bizarre items, ranging for actual plant seeds to beef jerky.

“The more money you send in, the more blessings will be returned to you. And that is still something I’m, amazingly, legally allowed to say,” Oliver joked.