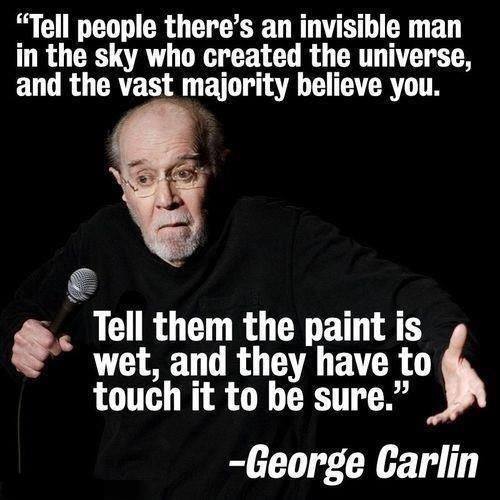 There is a YouTube clip that is a great example of fatally flawed “thinking”, and the claim presented is that they have clear simple logic that supposedly destroys new atheism.

Side note … it is curious that they use the term “New Atheism”, so should we conclude that their argument does not hold true for “old” atheism? Atheism is of course simply the rejection of god claims, and so prefixing the word with “new” or some other word, does not in any way alter that.

So anyway, the YouTube clip is 25 minutes, so I’m not suggesting that you bother because I’ve taken the hit for the team. Here is a quick summary …

… and the rest is simply more of the same.

If curious about the full conversation and not simply their one-sided presentation of the design argument, then you will find that the Wikipedia page does a nice job.

If this argument is going to be presented, then the first observation is that what you don’t get to do is to simply cherry pick the bits that agree with your belief and ignore the rebuttals, because doing so is more than a little bit dishonest.

The second rather obvious observation is that the argument is at best a deist argument and does not in any way verify any specific theist claim. I note with amusement that from their viewpoint all beliefs are man-made … except theirs, and yet that is exactly what every single variation of religious belief would claim, and they all stake a claim on this deist argument as “proof” that their specific theist claim is true.

Essentially it all boils down to … “Here is an observation, I have no idea how this could have happened naturally, therefore my specific god concept did it by magic”.

Personally, not knowing and not understanding is a better far more honest position to hold than simply sticking in your favourite myth as “the solution”. You will of course note that this “solution” itself always has specific attributes …

… and so it truly is best to wash away all these layers of pointless complexity that have no basis at all.

What is a far more interesting question to ask is to ponder over why many humans have a tendency to start with a specific conclusion, and then work backwards looking for things that confirm an emotional investment in a belief.

Ah but what is even more interesting is to ask why do some manage to break free, what is going on there? It is in so many ways natural for us to attribute the things that we do not understand to external supernatural agents such as ghosts, gods, aliens, etc…,we have been naturally selected to be like that because it imparted a distinct survival advantage, and so how has it been possible for us to break such cycles and change is indeed worth thinking about.

What does appear to have been instrumental is that our ability to communicate more effectively disrupts such cycles, complex speech, writing, printing, etc… and so we now face a new environment, the Internet,  that exposes even more information to us all. No longer can ideas be presented in isolation and insulated from the full conversation. YouTube clips might indeed contain cherry-picked assertions, but 20 seconds on google yields the rebuttals, and so the better ideas now begin to thrive and disrupt previous patterns. It perhaps takes a generation or two for such things to work themselves out because many are so deeply immersed emotionally that it can be almost impossible to let go and embrace better ideas. It is the young who are still open to new ideas that can happily put aside redundant thinking because they don’t carry such a deep emotional investment.

For example Lord Kelvin was firmly convinced that the age of the earth was at best 24 million years old (he did not know about radioactive decay). In 1904 Rutherford explained that it was really billions of years old and had both the evidence and the explanation (radioactive decay). Kelvin listened to that famous lecture, he was in the room, but was unable to accept this and never changed his mind even though he later privately debated it all face-to-face with Rutherford and yet remained convinced right up to his death in 1907 that it was only 24 million years old, and so it was the passing away of the older generation that enabled the older ideas to fade.

Meanwhile, going back to the fine-tuning argument, Douglas Adams did a nice satire of the argument that the universe is fine-tuned for life …

imagine a puddle waking up one morning and thinking, ‘This is an interesting world I find myself in, an interesting hole I find myself in, fits me rather neatly, doesn’t it? In fact, it fits me staggeringly well, must have been made to have me in it!’ This is such a powerful idea that as the sun rises in the sky and the air heats up and as, gradually, the puddle gets smaller and smaller, it’s still frantically hanging on to the notion that everything’s going to be all right, because this World was meant to have him in it, was built to have him in it; so the moment he disappears catches him rather by surprise. I think this may be something we need to be on the watch out for.

The above comes from his book entitled “The Salmon of Doubt“. It is a collection of essays about technology and life experiences, and also includes an incomplete novel on which Adams was working at the time of his death. The title of the book is a reference to the Irish myth of the Salmon of Knowledge.