On 4th January in 2011 Salmaan Taseer, the Pakistani governor of the province of Punjab, was gunned down and brutally murdered by Malik Mumtaz Qadri who was one of his own bodyguards.

I blogged about it at the time and highlighted that Five hundred Pakistani religious scholars said that anyone who expressed grief over the assassination of Salman Taseer, governor of Punjab province, could suffer the same fate.

Even at the best of times many politicians will not be popular with factions of the electorate, but what hideous crime could have stirred up hatred and amnesty to such a degree that his own bodyguard murdered him, and hundreds of clerics declared that even an expression of grief for his death would merit death?

Mr Taseer’s “crime” is that he was in fact a decent human being who was courageous enough to criticise the absurd blasphemy laws in Pakistan and to also support and even visit a Christian lady in jail who was facing the death penalty.

The Death of Mumtaz Qadri

At the time Mumtaz Qadri was hailed as a hero and showered in flowers, but was put on trail and condemned to hang for the brutal murder. After various appeals his sentence was finally carried out on 29th February (last Monday) and his funeral was then held yesterday. 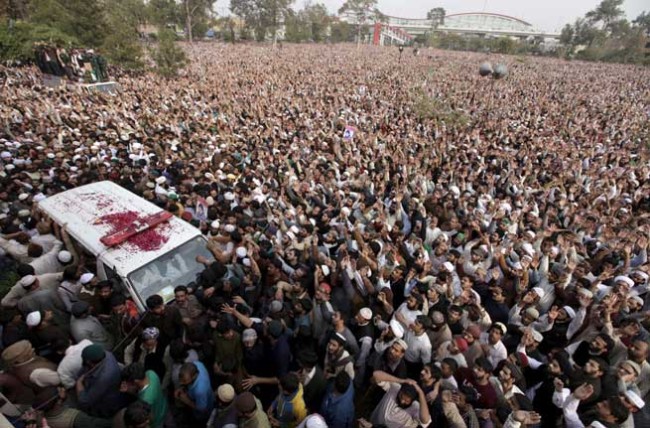 Clearly the Pakistani government took a huge risk here by executing him in order to send a very clear message to the extremists that nobody is above the law, and in anticipation of the potential for violence they closed schools and beefed up security by deploying thousands of police. Most politicians also quite wisely kept their heads down and did not comment. The various rallies in Karachi, Lahore and Islamabad were mostly peaceful in relative terms; they did do the usual tyre burning and slogan chanting, as well as blocking some roads into Islamabad, but no huge riot.

When the hero, Salmaan Taseer, the only politician courageous enough to stand with the oppressed, is deemed to be the villain, and and brutal fanatical thug and murderer is hailed as the hero, then you know beyond any doubt that something has gone very wrong within many hearts and minds because normal human decency has been flipped around like this, but that is the way it is with these hard-line right-wing Islamist groups.

Meanwhile, we should also pause to remember that the victim here, Salmaan Taseer, was himself a Muslim, and yet was also apparently fatally flawed because of ever so rare human attributes that conflicted with the Islamist agenda, namely compassion and human decency.