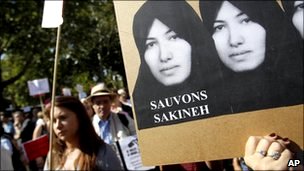 Apparently there is to be a UN agency that will be responsible for the promotion of woman’s rights and both Iran and Saudi Arabia are bidding to get seats on the board. Its looks like they might even get them,  Saudi Arabia is running uncontested, and Iran’s name has been put forward by the Asian group as part of a 10-nation slate

Click here to see the BBC news article on this

The mind simply boggles at the very idea. So what comes next? Perhaps the appointment of an alcoholic to an UN commission on alcohol abuse, and while they are at it, lets give responsibility to the Catholic church for the protection of children.

OK, that’s a bit tongue in cheek … it is however of extremely serious concern … to quote the BBC article …

“To have actors that could open up debates on whether women have equality in law and practice, or on whether women’s rights are human rights, will take away from precious time the UN has to address monumental issues that affect women and girls,” said Taina Bien-Aime, the executive director of a gender rights group, Equality Now.

“As an outsider our fear is that those debates would happen with actors like Saudi Arabia and Iran.”

Yes indeed, it is quite appalling that they are even considering the  appointment of regimens that are fundamentally hostile to half the human race to this vital role.

UPDATE: Iran failed to get a seat (yea) … but Saudi Arabia got theirs (boo) … (click here for details). Apparently …

Iran received the lowest number of votes of the 11 nations, which were vying for 10 seats