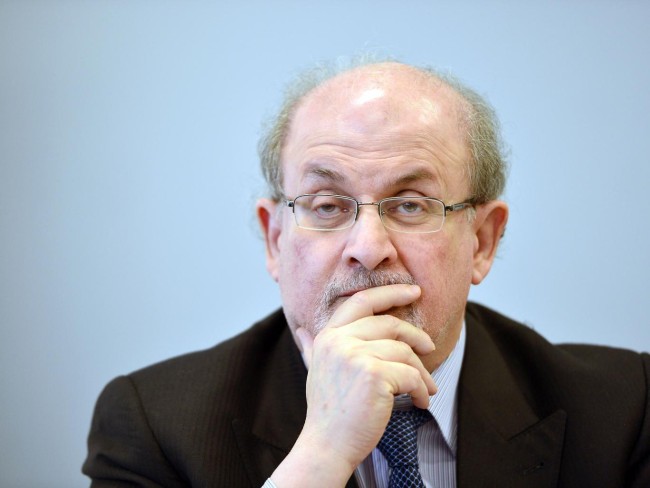 Now that sanctions are being lifted in Iran and they finally have funds, one of the very first things that they have decided to spend it on is a bounty for the murder of a foreign citizen whose only crime was to write a book (shudders, oh the horror). The UKs Independent reports …

Fars News Agency, which is closely affiliated with the Islamic Revolutionary Guards Corps (IRGC), was among the largest contributors, donating one billion Rials – nearly $30,000.

The announcement coincides with the anniversary of the fatwa issued the Ayatollah Ruhollah Khomeini, the founder of the Islamic Republic, the agency said.

Way to go Iran, what better way to establish your readiness to once again enter the world stage than by offering a bounty for the murder of a writer, it tells us a great deal.

It might perhaps be worth pointing out that one of the major themes of the Satanic Verses is the danger posed by belief systems that are absolute in their thinking and exclude anything and everything else, but nobody in Iran would actually know that since it is forbidden book and they can’t read it, and that is tragic because if anybody needed to read more than just one book then it is perhaps them.

OK, so what exactly is so offensive about the novel ?

The title “Satanic Verses” refers to a story recorded about Mohammed reciting some verses that were later withdrawn because he had been supposedly tricked by Satan into thinking them to be a revelation from Allah. You can read all about this here and if deeply curious, then jump from there into the original Islamic sources for it all. It is generally deemed to be mythology because the roots for it all, the chains of narrators, are weak. It appears within the Novel as a sub-plot.

However, the real reason for all the fuss is very much down to a huge misunderstanding. When attention was drawn to the novel, many Muslims understood it to be a claim that verses within the Quran were the work of Satan, and that is simply not a factual claim. Once the spotlight was thrown upon it then some deeply religious people who are permanently ready to be offended started to find other almost random reasons to be offended by it all. Many, if not most of those that declared that they were offended never actually read the book at all … ever, and simply joined the crowd rushing out of the village at night with pitchforks in hand to slay a beast that did not actually exist.

Nobody would have known or cared if the novel itself had not been extensively popularised by one of the greatest book promoters ever – the Ayatollah Khomeini. Silence would have resulted in a print run of (I’m guessing) about 30,000, but with all the fuss generated, it went on to sell millions of copies and earned Mr Rushdie $2 million in the first year alone.

And no doubt we will now see a bump in sales once again now that Iran is back on the world stage and once again promoting it, and so perhaps Mr Rushdie will be writing them a thank you note for making him so wealthy.

They might be striving to censor and silence dissent, but the complete opposite is the net effect of it all.

Finally, one last key point, The Satanic Verses itself is fiction, so perhaps in that regard it is very similar to the Quran.