My Daughter was telling me yesterday about a dialog within her RE class in school. The teacher (a “really” Christian lady for the understandable reason that is perhaps a requirement for the role), had been delving into the topic of various ethical questions. One example was of a baby who had been born with no brain, was on life support, and the doctors assured the parents that there was no hope. She asked the class, “what do you do in circumstances like that, would you turn off the life-support or not?”.

As the debate proceeded, the students reached the most obvious logical conclusion, and were then faced with a rebuttal from the RE teacher that went along the lines of, “Ah, but God could do a miracle”.

My daughter, and her friends maintained their stance, and concluded that this was simply ridiculous, because brains do not spontaneously appear in such cases (or apparently in RE teachers either).

Cross-generational disparity has perhaps always been like this to some degree over the past few centuries. Look back and you discover that the agrarian mode of thinking that prevailed in the pre-industrial age was one that was very practical, very self-reliant and self-sufficient, and yet at the same time leaned very heavily upon local social interactions. It was this social interaction that was the ultimate source of information for what you believed, and how you behaved.

Times changed and we moved into an Industrial age, one that broke the more traditional social interactions and so the agrarian midst that prevailed was replaced by what we might term the mindset of modernity. The need that the industrial society had for the flow of information to be increased resulted in the rise of universal education, and as individuals we because more specialised and also better informed.

That however was not the end-game, we are now shifting beyond that into the knowledge era, an age in which once again the flow of information has been greatly increased, a post-modernity age. No longer can we fill our heads with knowledge and skills in school that will remain viable for life, and so instead of solid knowledge, we move forward to a more fluid adaptive mode, and as our understanding increases we dynamically discard old knowledge and embrace better ways that are more evidence-based rational solutions.

There now exists a generation that is internally more tightly coupled in real-time, and yet at the same time, contains no loyalty to older traditions. They carry in their pockets a device that yields instant access to the entire sum of human knowledge, and develop friendships that span the globe This is a new flat world where geography is no longer a barrier to such interactions.

The trends are clear, the rising generation thinks differently and believes differently – dramatic change is inevitable as successive generations travel further into this undiscovered country and pioneer the way.

YouGov issued the results of a UK based poll a couple of days ago, and announced that …

Overall, a third (33%) of British adults do not believe in God or a greater spiritual power of any kind – roughly the same number as believe in “a God” (32%). The rest either believe in a higher power but not a God (20%) or don’t know what they believe (14%).

OK, that’s interesting, but if you scratch away the surface and look under the covers, you find something quite fascinating. Take a look at this … 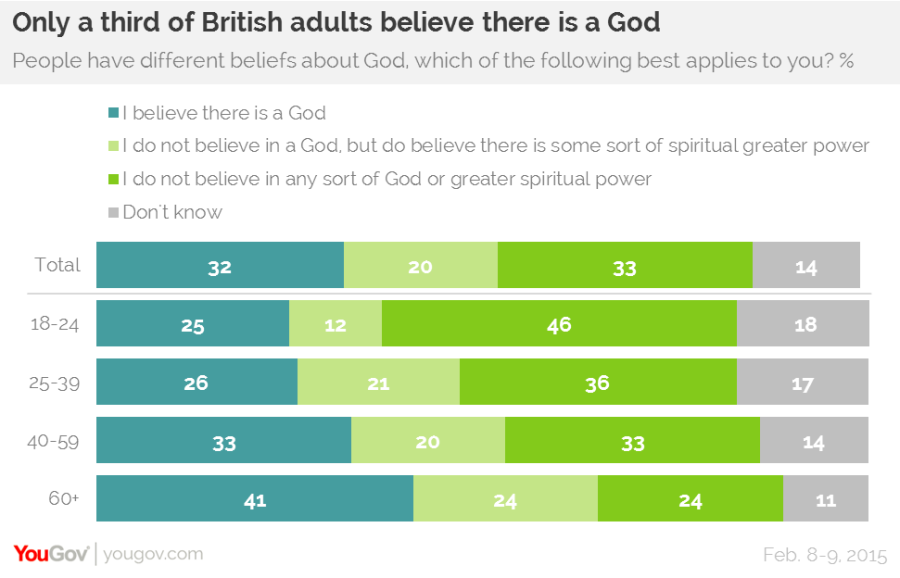 Here you can see that right across the generations a huge shift in thinking is happening.

Flip that coin over and instead of asking about god, ask about religion. What you discover (to no great surprise) is that the numbers tell a similar story … 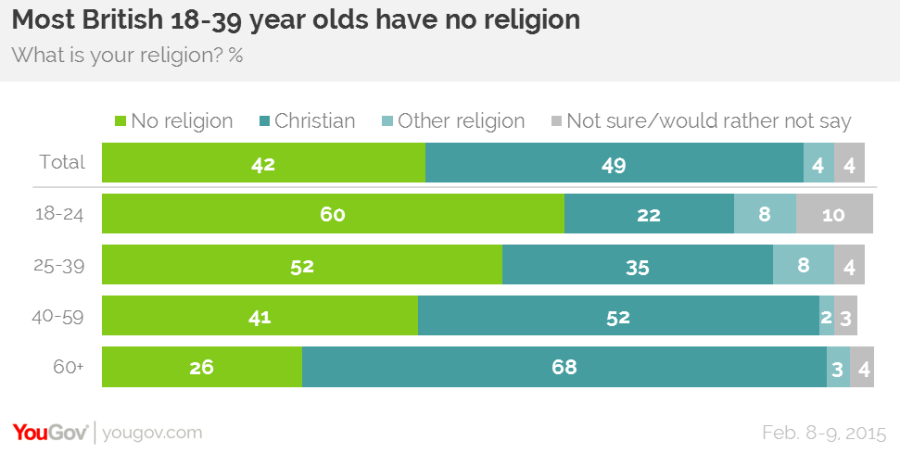 Then dig a bit further and you make an even more fascinating discovery.

Many of those that claim that they do believe, actually don’t …

Only 55% of self-identified Christians believe in a God while 23% believe in “some sort of greater spiritual power”, but not a God. Nearly one in ten Christians (9%) don’t believe in any higher power, and 12% don’t know what they believe in.

… and some of those that claim that they do not believe, actually do …

22% of non-religious people believe in some kind of higher power.

… so clearly things are in a considerable degree of flux out there. This is perhaps a reflection of the prevailing belief that the UK is a Christian country going head-to-head with the reality that it is peopled mostly by individuals who do not consider themselves to be religious.

Is this all unique to just the UK?

Nope, there is a similar trend right across the planet …