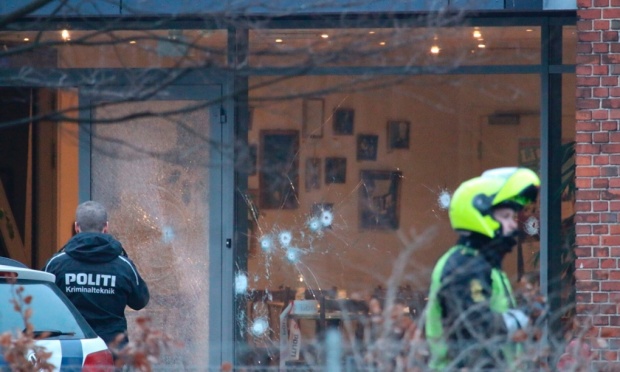 Hopefully you can immediately grasp the right answer for this question, and if so then that is good. Alas, sadly there appears to be a strand of thinking that simply does not get it.

First, to illustrate the point, let’s switch topic and imagine that a horrendous rape has taken place. The rapist is then put on trial and his defence is, “But look at what she was wearing, she was asking for it“. Would that then be a valid defence?

Of course not, it never has been, and never will be.

The social awareness of this mode of thinking has its roots in the 1970s when a chap called William Ryan coined the phrase “blaming the victim” in his 1971 book of the same name. In that book he was tackling the topic of racism and there described “victim blaming” as an means used to justify racism against black people in the US. From there it was quickly picked up and adapted to other contexts, such as rape.

Now is the time to point out that this is exactly what has been happening in the context of attacks upon cartoonists who dare to draw satirical images of Mohammed.

The news is that yesterday Swedish artist Lars Vilks, who has faced death threats for caricaturing prophet Muhammad, was at the blasphemy debate in a cafe that was hit by an estimated 200 shots. Also there was François Zimeray, the French ambassador to Denmark, who reported the details to the press …

“They fired on us from the outside. It was the same intention as [the 7 January attack on] Charlie Hebdo except they didn’t manage to get in,” Zimeray told AFP.

“Intuitively I would say there were at least 50 gunshots, and the police here are saying 200. Bullets went through the doors and everyone threw themselves to the floor,” the ambassador added.

“We managed to flee the room, and now we’re staying inside because it’s still dangerous. The attackers haven’t been caught and they could very well still be in the neighbourhood.”

He sent this tweet from the cafe moments after the attack.

Neither Vilks nor Zimeray were injured, but at least one person was killed in the attack at about 3pm GMT. The gunmen fled the scene by car.

“Well what do you expect, they were asking for it”

Now this is where the Victim Blaming comes into play, and in response to the usual claims, Ali Rizvi has this rebuttal that he has personally fired right back at such commenters on twitter … 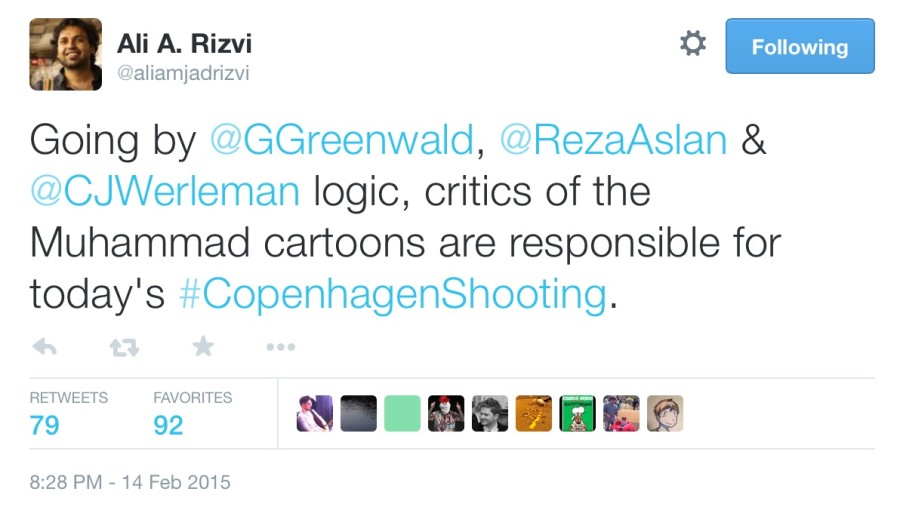 It is sad that the rather obvious needs to be stated, but … Those that pull the trigger are wholly and entirely responsible … period.

The claim that they were provoked because they were offended by a cartoon is absurd in the extreme. The deployment of a cartoon to criticise the idea that a long dead man was perfect and divine is not justification for a violent response. Such violence also justifies and verifies that the very existence of such criticism, and so those that believe might not agree with the criticism, but they cannot dodge the observation that it wholly appropriate when such responses take place.

As was recently pointed out by the historian Norman Parniker …

Deliberate ridicule is not meant as an intellectual challenge. It is meant as a means to address IRRATIONAL positions.In this case the psychological relationship between many Muslims (certainly not all) and the Prophet Muhammad.For what is rational about ‘loving’ a long dead man that you have not met, and who is known to you only through stories and ancient traditions? What is rational about claiming that the word ‘perfect’ can be used to describe any human being? And what is rational about deeply emotional and violent responses to the mocking of that long dead man?Rational argument is of no use against such a psychological state. All that we can do is demonstrate the absurdity of the position. Mocking is perhaps the only effective response that we have.