I never saw it and would have never seen it, that is until somebody pointed it out to me.

The latest Charlie Hebdo cover (below) features an Image of Mohammed crying and holding up a sign that reads “Je Suis Charlie”. On the surface this appears to be saying that what happened is completely at odds with peace loving tolerant Mohammed and everything he stood for, hence he is crying about what happened that such a horrendous crime was enacted by a gang of thugs using his name.

Oh and least you wonder, “Tout est Pardonne” translates to “All is Forgiven”. 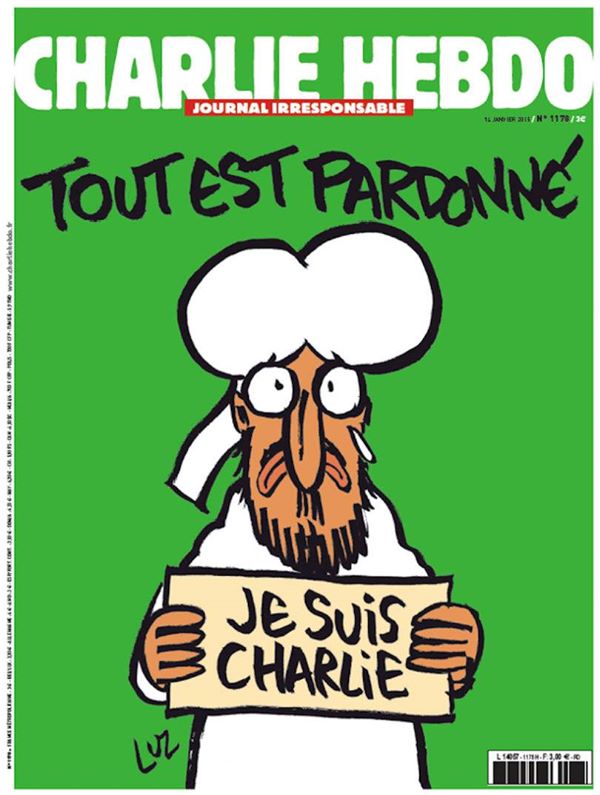 This is of course a satirical magazine, so on the surface a message of forgiveness is slightly at odds with their normal theme, but I did also accept it at face value and saw the very existence of an Image of Mohammed as criticism of the idea of death for those that were deemed to have done something offensive … especially when it is an image that contains a Mohammed who does not support such an idea, but instead supports those who deployed satire to criticise violence and intolerance.

Then somebody pointed out to me that his hat is a dick.

(About here is the right moment to go “yikes”, and if you review other Images of Mohammed in Charlie Hebdo, they all do the same)

Apparently seeing or not seeing this identifies your cultural heritage and I’m told that while everybody in France immediately saw this, most Anglos miss it.

So what was Mohammed really like .. peaceful or violent?

There is a narrative I’m seen that portrays Mohammed as peaceful, loving, and tolerant, and yet knowing what I know about his life, I find this to be a rather odd claim because the facts reveal a character who was the complete opposite of that. Here for example is a link to a list of the various attacks of aggression conducted by Mohammed on his direct orders, to steal booty, take slaves (yes, he was also a slave trader), and generally assassinate those he did not like. It’s a long list, and is well sourced using authentic Islamic sources that you can verify yourself and that includes the Qur’an.

These are not the actions of a peace loving, tolerant individual, and so to claim that Mohammed is peace loving, tolerant and non-violent is to discard all the historical sources cited and that includes vast swathes of the Qur’an itself. There are of course rebuttals that claim that this was mostly defensive because “they” were attacking Allah’s chosen prophet, or similar … except he clearly in many cases initiated the attack to simply steal gold and slaves.

Another criticism concerns his domestic arrangements, he not only had up to about 15 wives (only about 11 were ever concurrent), but he also kept a collection of sex slaves. However, one specific marriage is truly shocking, and it is of course Aisha; at the age of 50 he married 6 year old Aisha, and sadly this paedophilic relationship has now institutionalised such marriages within many strands of Islamic thinking today. If curious about how true this really is, I’ve examined his relationship with Aisha and verified that this is indeed confirmed by several different chains of narrators, and that none of the rebuttals withstand any analysis – you can find a link to all that here and it includes links to the islamic sources for you to check.

Have you ever been to a movie theatre and watched a pirate movie? While sitting there you become emotionally bonded in the fantasy to Jonny Depp and cheer as he sails across the seven seas pillaging, stealing gold, and taking women. Yes he is the hero, and yes those he attacks are presented as the villains, and that is all a fantasy. The reality is that pirates were historically brutal thugs, not heroes.

The movie theatre experience strikes me as one that is psychologically very similar; those emotionally bonded to Islam perceive Mohammed as the ultimate hero, one appointed by a God, and so all those who he fought against are accepted as evil and deserving of what they got. When they themselves act in a similar manner and deliver death to those they perceive as the villains for simply daring to criticise, or for the hideous crime of not believing, then they cast themselves into the same role within this religious delusion.

Now do not misunderstand what I am saying, I am not suggesting that all Muslims are brutal thugs intent on slaughtering all, most are decent human beings who have no desire to harm anybody. The problem here is an emotional narrative, one that can potentially ensnare anybody, and so all those caught up in it risk slotting themselves into the Mohammed hero role and then proceed to commit some truly barbaric and abhorrent crimes, while memorised by the idea that they are the good guys, and those that they strike against are evil, and remain quite oblivious and blinded to what they are actually doing.

So yes, the Charlie Hebdo cover nailed it, the idea that Mohammed was a peace loving tolerant individual is a myth, because historically he really was a complete dick head, and pointing this out matters, because to not do so is to enable the delusion to persist.