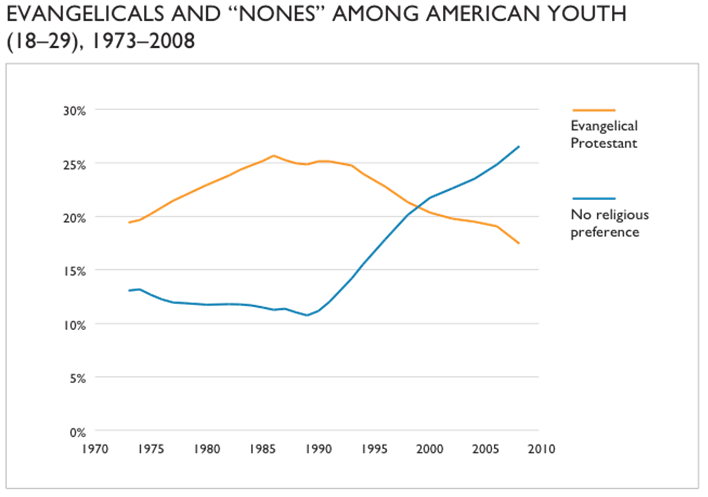 Craig Dunkley, a Christian apologist, writes within the American Thinker about the decline of Christianity in the US, and wants to rally those that believe to push back against the tide of disbelief.

Christianity is under attack in America, and it’s losing.  Meanwhile, the Church is, in general, sitting out the fight and hoping the problem goes away.

Hope is not a strategy.  It’s time to act.

Data from the Pew Research Center shows that those who consider themselves atheist, agnostic, or unaffiliated with any religion have been rising as a percentage of the U.S. population.  In 2012, nearly 20% of the public fell into one of those categories, up nearly 5 percentage points over the preceding 5 years.

OK, so why am I commenting on this?

Well, because he is promoting a few claims that motivate me to comment.

He rolls out the old claim that the United States has been a predominantly Christian nation from the start, but then that is not a surprise, he would of course say that since he is a believer. The problem is, the way he asserts this is neither factual nor honest at all. He writes …

Our sense of personal freedom and tolerance, backed by a thoroughly Judeo-Christian worldview, has contributed mightily to this nation’s greatness.

I would perhaps speculate that history is not really his thing, and so I do feel obliged to point out a rather important key fact …

It is of course true that the vast majority of the population have embraced some variation of Christianity, but due to the lack of any specific variation being pushed by the state, it is highly fragmented, and so many of those variations, even the mainstream ones, will deem all the others to be false and not “true” Christians. Catholics will advise that only they are members of the one true Church, evangelicals will assert that Catholics are not “true” Christians because “they” are not born again, others will assert that you must be baptised in the spirit and speak in tongues, etc …

So no, the sense of personal freedom comes, not because of any Christian heritage, but instead has is roots firmly planted in a secular heritage, one that prevents any specific belief walking all over the others. If such constraints were not in place, you can be quite sure that the history of tolerance” would have been quite different.

The main thrust of his article is the assertion that the modern decline has been brought about by various modern authors whom he names. Apparently they have been promoting what he asserts to be lies and misinformation regarding Christianity.

OK, so I’m not proposing to dig into the precise examples of the supposed “lies” that he quotes, and rip apart his rebuttals.

Well because those are not the reasons that people are actually quitting. The reasons why people walk away from various religious communities are of course quite diverse, but generally it can often be a reaction to the truly abhorrent obnoxious behaviour – intolerance of anything and everything that is not exactly them, homophobia, misogyney, weird anti-science rhetoric, etc… – and so leaving is often an emotional response, and I would add a fully justifiable one. It need not stop there, because it can also be a reaction to some truly perverse stuff, mega-church pastors scamming the gullible so that they can bask in a very lavish lifestyle, or various pastors or priests abusing young children. In fact, we have see so much of that, it is hardly newsworthy anymore.

Beyond all that, the Internet has also exposed us all to good hard factual information from a wide diversity of sources that reveal that the various religious claims being asserted have no truly objective evidence to back them up at all.

The key here is this: the various religious claims face a challenge, not because of supposed lies and misinformation, but rather because many are waking up to the realisation that such claims have never ever been established as true at all … ever … and that the quantity of credible independently verifiable objective evidence is exactly zero.

When faced with such a realisation, why would anybody who gives it some thought accept things that have no evidence at all as true?

The scope of this includes some rather fundamental questions …

There are of course claims, and no doubt such claims will persist for cultural and emotional reasons, but nobody has ever come up with even one single truly objective and independently verifiable jot of evidence.

With this growing understanding spreading, and a younger generation who lack decades worth of emotional ties to religious communities, a rising tide of nones is inevitable.

If Mr Dunkley is truly concerned about churches that are rapidly shrinking, then he perhaps needs to consider a tactic that involves putting something on the table that verifies some of the truly absurd claims that in the past 2000 years have no evidence at all – I’ll not be holding my breath.