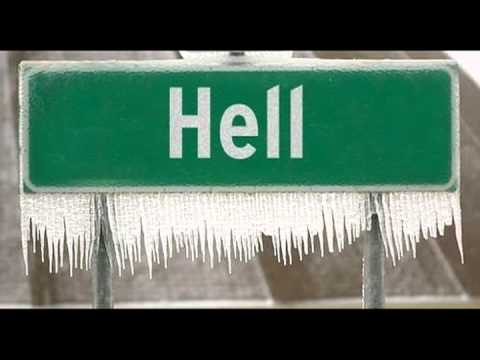 The concept of Hell is a very emotionally potent religious idea and so it is perhaps appropriate to cast our skeptical eye upon it. The idea is not just an interesting abstraction, but is instead for some quite real. Many do truly have a deep abiding fear of it due to a religious upbringing and so it is important to recognise this and not simply dismiss it.

I’m perhaps reminded of the topic because of the recent tragic passing of Gene Wilder. I loved his movies and very much enjoyed his work, he will be  quite rightly well-remembered. Michael Stone has been writing about how some Christians tend to pounce on such events when the person who has passed was openly not a believer. Mr Wilder was quite open about this, and when interviewed for the “Stars of David: Prominent Jews Talk About Being Jewish” book, he happily explained …

I’m going to tell you what my religion is. Do unto others as you would have them do unto you. Period. Terminato. Finito. I have no other religion. I feel very Jewish and I feel very grateful to be Jewish. But I don’t believe in God or anything to do with the Jewish religion.

Mr Stone within his posting then points out that David J Stewart, a Christian fundamentalist, is promoting the idea that Mr Wilder is now burning in hell simply because he did not believe and thus did not possess this magical mythical golden ticket.

Often when somebody is shouting loudly about religion you discover that it is being driven by something within themselves, and so I googled Mr Stewart’s name. Interestingly enough I discovered that he is asserted by some to be a convicted sex offender and that back in 2009, not too long ago, he was found guilty of having sex with an underage girl. To be honest, it is never really a surprise to discover such undercurrents, and so apparently it is his own guilt and fear that is a primary driving force that motivates him to turn the passing of somebody famous into a soap box.

So what exactly is Hell?

Now this is where it all gets interesting. You would think that there would be full clarity and agreement on the concept, but no, instead we find that there exists a very wide diversity of distinctly different beliefs on the topic.

It is often viewed, as not a place, but instead is simply an absence of God, and hence not being in the presence of God is Hell. This is not universal, some Icons do depict hell as a place of punishment.

Perhaps the most popular variation. It is declared to be a real place of eternal fiery punishment for those that refuse to love God. However, in addition to the heaven and Hell concepts, there is also a middle place they call purgatory where you can still potentially avoid hell. Historically Hell was often viewed as physically under the ground within the earth.

It is generally seen as a place of unending conscious torment, both physical and spiritual, but for some that would simply be due to it being an “eternal separation” from God.

There are some who do not hold the belief that hell is forever and instead assert that you will be extinguished or annihilated after a period of “limited conscious punishment”. The groups that adhere to that belief include the Seventh-day Adventist Church, Jehovah’s Witnesses and Christadelphians.

In summary, there is no agreement or consensus at all.

What Evidence exists to verify that Hell is actually real in any way?

Just one word … none.

The concept exists, not because Hell is actually real, but instead as an attribute of religious belief. It is a potent bit of emotional manipulation designed to instil fear and thus motivate those that believe to stick with it and not drop out.

People who have been brought up within a belief system that promotes the “fear of hell” message often find that even after they have stopped being part of the belief, this emotional feeling looms and creates a pressure to go back. As a rather blatant bit of psychological manipulation it thrives and survives because it is effective.

I’m struggling with a Fear of Hell, what can I do?

People do have quite crippling fears that can greatly impact their lives. Many of us do have utterly irrational fears to various degrees … mice, dentist, spiders, heights, etc … and this is a normal part of life. I also put into this list a fear of Hell as well. If one of these fears becomes so intense that it causes tremendous anxiety and interferes with your normal life, then there are specific strategies that you can adopt as a form of self-help.

If you are unable to cope, then you should seek help.

If however the fear is real, but not to a degree that cripples your normal life, then there are some self-help strategies that you can adopt.

Here are a few self-help tips to consider.

Tip-1 Face your fears one step at a time

Face up to the idea itself. Build a ladder and start climbing it.

Make a list of steps you can take. For example, you could look into where the idea comes from and how it has grown and evolved over time. Take it step by step and grow this into an understanding that it is a human made concept that has no evidence at all. Nurture a healthy skepticism of the claims and permit that to flourish.

Tip-2 Use a relaxation exercise

Deep breathing, meditation, and muscle relaxation are powerful antidotes to anxiety, panic, and fear. Learn some of these and add them into you toolkit of coping strategies.

You are a good person, better than the God described within the bible who indulged in genocide and promoted slavery as a good idea. Stand up and challenge the archaic ideas that seek to dominate you, and instead dominate them. Ponder over the observation that god, as described in the bible has slaughtered on a whim and on an industrial scale many innocent people. Come to appreciate that you are morally far better than that and would not choose to behave like that.

The text is simply an archaic text that reflects the fears and hopes of those that wrote it. It is time to cast off the toys of our cultural childhood.

The Concept of Hell

If you are struggling with strong emotions and a real fear, then here are a few additional points to consider.

I must however admit that each and every variation of religious belief does get one thing right. They all consider every other variation of belief to be wrong. I agree, they all are quite correct about that.

Where Can I find more help?

2 thoughts on “What can you do if you are afraid of hell?”