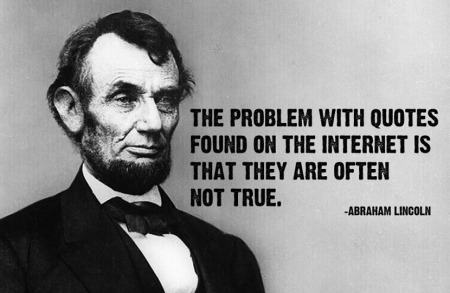 It is very common to see quotes within various memes on Facebook and elsewhere. It is also often well worth asking yourself a few questions. Here are two key filters to apply, even if the quote appears to be something you agree with …

For the first, the idea that people manufacture quotes and them attribute it to somebody famous is well-known. I’m sure you are all familiar with this famous quote …

Hopefully you laughed and did not just accept that Lincoln was making a good observation when he said that, you can see the problem there, right? To be frank I can never really be sure, because those that represent his Republican party these days appear to be taking the term “How stupid can you be?” as a challenge and not simply criticism.

OK, so speaking of daft Republicans, here is another quite recent quote … 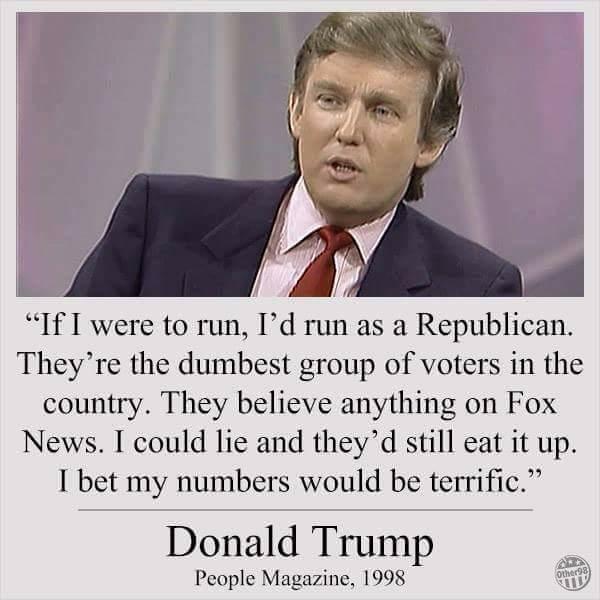 If you are reading this posting then it is quite probable that you are already aware that I’m not a Trump supporter, and you might have similar feelings. The above quote plays quite nicely to what we might feel about Trump and so it appears to confirm everything that we already think. It would be natural to not verify it because we do agree, and so we might just share it without checking.

I’m sure you can see where this is going by now. So did he actually say anything like that within an interview with People Magazine in 1998? The simple answer is “No”, it is a fake claim. If you key the quote into google you can soon find that out. The folklore and urban legend debunking website, snopes, looked into the above and verified that it is not true.

Incidentally, as a side note, snopes has no political leanings and strives to remain neutral, they debunk myths from all sides. David Mikkelson, whom I’ve interacted with for rather a long time since the early days of hanging out within the alt.folklore.urban usenet group, (think pre-internet as we now know it), has not registered with any political party, and will happily strive to see any myth debunked regardless of the actual source.

Incidentally, when comparing Trump and Hillary, you can factcheck and discover that Hillary is generally truthful, and Trump is generally just making stuff up.

If a quote was really said by the person it is being attributed to, you still need to consider the context in which it appears.

Let’s work a rather famous example that I find illustrates this. Here is a quote from Charles Darwin that comes from Chapter 6 of On The Origin of the Species …

To suppose that the eye, with all its inimitable contrivances for adjusting the focus to different distances, for admitting different amounts of light, and for the correction of spherical and chromatic aberration, could have been formed by natural selection, seems, I freely confess, absurd in the highest possible degree.

Oh wow, this is astonishing, Darwin himself is telling us that the idea that the human eye evolved is utterly absurd. As you might imagine. many creationists are rather fond of quoting this.

Before the reveal, let’s first cover the basics. Evolution is real, and we know this to be true, not because 99.997% of the subject matter experts, the millions of life-science scientists who dedicate their lives researching biology, agree that evolution is factual, but because we have good solid evidence that verifies this to be the case. There are of course creationists who will disagree, but in the end they do so for what are basically religious reasons and not scientific ones. There are even a few life-science scientists with a Ph.D. that are young earth creationists. If engaged, they will attempt to bamboozle you with lots of hand-waving and sciency sounding stuff. However, it is not you that they need to convince, but rather their colleagues within the life-science community. So far, none of their colleagues are convinced or even impressed.

OK, back to that that quote from Darwin, what is going on, and why did Darwin himself reject the idea that the human eye evolved?

Actually he didn’t. the quote has been quote-mined out of it’s original context and then presented in isolation.

It was a common literally form to anticipate the arguments your opponents might make, and so what Darwin was doing was to find state a possible objection, then moved on to address it. Here is that quote once again, but put back into context …

To suppose that the eye with all its inimitable contrivances for adjusting the focus to different distances, for admitting different amounts of light, and for the correction of spherical and chromatic aberration, could have been formed by natural selection, seems, I freely confess, absurd in the highest degree. When it was first said that the sun stood still and the world turned round, the common sense of mankind declared the doctrine false; but the old saying of Vox populi, vox Dei, as every philosopher knows, cannot be trusted in science. Reason tells me, that if numerous gradations from a simple and imperfect eye to one complex and perfect can be shown to exist, each grade being useful to its possessor, as is certainly the case; if further, the eye ever varies and the variations be inherited, as is likewise certainly the case; and if such variations should be useful to any animal under changing conditions of life, then the difficulty of believing that a perfect and complex eye could be formed by natural selection, though insuperable by our imagination, should not be considered as subversive of the theory. How a nerve comes to be sensitive to light, hardly concerns us more than how life itself originated; but I may remark that, as some of the lowest organisms, in which nerves cannot be detected, are capable of perceiving light, it does not seem impossible that certain sensitive elements in their sarcode should become aggregated and developed into nerves, endowed with this special sensibility.

As an aside, if you are interested in reading up on the topic of the Evolution of the eye, then the Wikipedia article on the topic covers it very well.

Hopefully you now can see that context matters. the Darwin example illustrates how something can be taken out of its original context and when presented in isolation appears to suggest the complete opposite.

Did the person being quoted really say what is being attributed to them?

In what context did they say it?

A few years ago I encountered one deeply religious chap who started a thread within a Facebook group. He was taking an anti-evolution stance and so his thread opened with a picture of an eye along with the Darwin quote presented out of context.

When I pointed out that it was a well-known bit of creationist quote-mining and cited a reference to the full quote, that more or less ended that thread. However, to my complete and utter astonishment, the very next day he starts a new thread with the exact same quote and proceeded to once again assert the exact same claim.