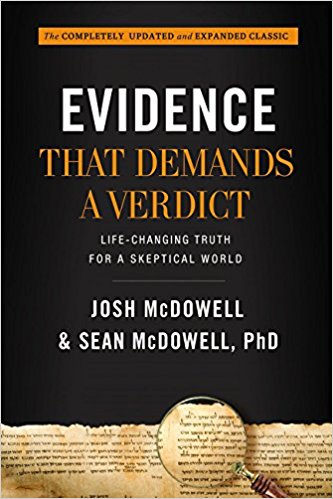 The Christian Post has published an article by Josh McDowell in which he makes some amazing claims. For example he cites the existence of Forensic evidence that Jesus Rose from the dead. Normally I’d roll my eyes at stuff like this and then move on, but I’m pausing for two reasons to take a closer look. First, yes it is “the” Josh McDowell, the author of “Evidence That Demands a Verdict”. Secondly, he is claiming “Forensic” evidence and so that sounds very compelling.

Let’s dip a toe into this murky pool and see what we find.

First A Bit of Background

His most famous publication is “Evidence That Demands a Verdict”. Published in 1972 it is one of the most influential Christian apologetic books. Back in my days as a believer I had a copy and so I’m familiar with the content. It does however face rather a lot of criticism and does not withstand a critical analysis. McDowell responded with an updated version titled “New Evidence that Demands a verdict” and as you might anticipate, it completely ignored the previous criticisms.

The article that has just been published in Christian Post on 10th June is perhaps a golden opportunity for the now 78 year old Mr McDowell to distill his many decades of extensive thinking on the topic of evidence to articulate some of his very best most compelling arguments.

Let’s take a look and see what we find.

Yes, Atheists Have Faith. But Do They Have Evidence?

The title itself, “Yes, Atheists Have Faith. But Do They Have Evidence?” is a gross distortion of reality …

Not only is it really not a good start, but it goes rapidly downhill from there as you get into the content.

He starts off with this pitch …

when a group of Christians challenged me to investigate the evidence for Christianity intellectually, I thought it was a joke. I accepted their challenge, fully intending to destroy Christianity and rub it in their faces.

I spent months traveling around the world investigating the claims of Christ. By the time I finished, I was shocked. Not only was it impossible for me to refute Christianity, I actually became convinced that it was true based on the historical evidence!

Mr McDowell has personally stated that while in College he was an Agnostic until he wrote a paper concerning the historical evidence for Christianity. Net effect – he made the leap and became a believer. He did not spend “months traveling around the world investigating the claims of Christ”, nor would he need to do so, unless of course he considers a trip to the college library to be on par with a trip around the world. What is true is that once he became a full time staff member of Campus Crusade for Christ International in 1964 he did travel as their apologetics representative in Latin America. As best as I can tell the only international travelling he ever did was to promote religious belief, not investigate evidence.

So what “evidence” does he offer.

His article lays out just three examples of “evidence”, so let’s review each in turn.

I have no problem with the idea that we can accurately and reliably be sure that the document we have today is an accurate copy of the text that was first written. What this however fails to do is to establish the accuracy or reliability of what the written text claims.

We do know with a degree of certainty specific things.

In other words yes, there are things we do know because that is what the evidence clearly points to and so enables us to have an appropriate degree of certainty about this. None of this helps make a case for any of it actually being true.

In other words, we have documentary evidence regarding the things people believed.

To help us verify if Jesus is truly sent from God, we have prophetic evidence. The Old Testament has many different prophecies which predict the coming Messiah, including his family line, the nature of his ministry, his betrayal and death, and we even learn that the Messiah will come before the destruction of the Jewish temple in 70 A.D. The likelihood of this happening by chance is essentially zero. But Jesus fulfilled every prophecy about himself.

Er … no, that’s not how this works. If he wishes to actually establish this claim then he needs to produce evidence that the prophetic details described within the Gospels actually happened.

The authors of the Gospels were wholly familiar with the old testament and all the prophetic claims, so it is not exactly a huge leap to see that they simply spun a narrative around a messiah claimant to enable his credentials to be established.

What we do have rather clear evidence for is religious spin. For example, both Matthew and Luke cobble up a very contrived and convoluted way to explain how somebody who was known to be from Nazareth was actually born in Bethlehem. They needed to do that because the Messiah was supposed to be from Bethlehem.

In Matthew we discover that Mary and Joseph supposedly lived in Bethlehem in their own house.

Meanwhile over in Luke we find an entirely different story. Here we find that Mary and Joseph live in Nazareth and needed to travel to  Bethlehem for a census. That is quite clearly contrived to get it all to fit. The Roman Tax system was based on  property and ownership of land, there was never any such census based upon ancestry, Roman taxation simply did not operate like that.

Instead, we discover that Joseph and Mary travel on to Jerusalem right after the birth. Luke’s theme is different, he is describing a prophet for everybody, and so when he is presented in the temple, he is declared to be a light for the gentiles. Once done, they head back home to Nazareth

So why are these two accounts so different?

Quite clearly both authors needed to contend with the fact that it was common knowledge that their candidate came from Galilee, yet if he was to be the messiah, then he needed to have been born in Bethlehem, the town of Kind David, so they each contrived elaborate, but quite different stories that fitted in with their view of who they believed him to be.

Evidence # 3 – forensic evidence for Jesus rising from the dead

To help us determine if Jesus really rose from the dead, we have forensic evidence. For instance, we can look at the motive of the apostles who proclaimed that they saw Jesus risen from the dead. Why would they invent a story to get themselves persecuted? As the book of Acts tells us, they were threatened, beaten, thrown in prison, and some even killed for the proclamation of their belief that Jesus rose from the dead. By all accounts, they truly believed to have seen, felt, touched and been with the risen Jesus in clear conscience and sound mind.

Would people truly die for something they they know is not really true?

The rather obvious is that we need not doubt their sincerity, but this also is not “evidence”. People will happily die for things that they truly believe to be true, but is quite obviously not. If sincerity and a willingness to die for a belief is to become the test for the truthfulness of a claim, then given what happened on 9/11 I’d be curious to understand why Mr McDowell has not converted to Islam.

What we do perhaps learn from this third line of “evidence” is that either Mr McDowell does not understand the term “forensic evidence”, or alternatively, he actually does, and is simply using it rather dishonestly.

He finishes off with …

Christians have faith which is backed by evidence.

.. to which we can observe that no compelling evidence. His claim is also a rather odd combination, if there was real evidence then you don’t need faith, because it all becomes a fact. You can’t have both faith and real evidence, they are mutually exclusive.

He also chips in with …

… which is rather obvious nonsense. He tries to justify it with this …

Again no, none of that is in any way related to the lack of belief that a God did it all by magic. The entire scope of atheism is that he has a God claim and there are people who don’t believe it. That’s the precise scope of it all. Pointing to stuff that nobody understands and claiming “God did it” is indeed faith. Rejecting that answer and sticking with “I don’t know” is not “faith”, but instead is intellectual honesty. That’s perhaps a concept that appears to have utterly eluded Mr McDowell.

1 thought on “Does Josh McDowell have Evidence That Demands a Verdict?”