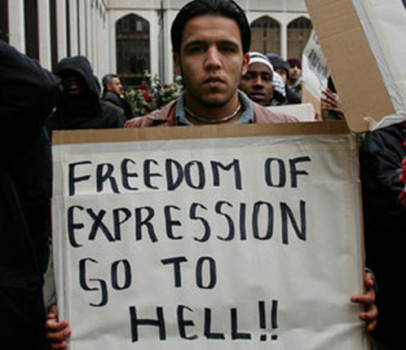 Andrew Brown over at the Guardian is rather gifted at constructing what can be best termed “Clickbait”, he often writes something that is so utterly absurd that it ends up sucking many into a heated debate. I’m never entirely sure if that is by design, or is simply the natural byproduct of what he writes, but either way, as far as the Guardian is concerned, he gets to keep his job for another day because they will be basking in all the traffic it draws.

One other aspect I often struggle with is to wonder if what he writes reflects what he actually thinks, or if he is simply echoing out views he has come across and so writes what he writes because is it appropriate to debate the issue in the bright spotlight and not permit it to retain a status of a common thought that is never articulated in public.

So today’s example is one where he appears to be claiming that those that criticise Islam are racists, and so he proceeds to write this …

It is a trope among people who loathe and fear Islam that their fear and loathing has nothing in common with racism because Islam is not a race, the implication being that hating Muslims is rational and wise whereas hating black people is deeply irrational and stupid.

Some people who claim that Islam is profoundly evil will also say that they bear Muslims no ill will but I don’t think they are telling the truth. It is really difficult and indeed psychologically unnatural to claim that you hate an ideology without hating the people in whose lives it is expressed.

OK, let’s start with what should be a couple of very obvious points …

So in essence, turing a blind eye to the reality of Islamic thinking, how it manifests, and ignoring the almost daily acts of violence that is directly inspired and motivated by some strand of islamic thinking is really not a moral position, silence in the face of all this is just not an option.

However, perhaps the very best reply to Mr Brown’s article, the one that needs to have a spotlight thrown upon it, is the reply posted by the Council of Ex-Muslims …

As Exmuslims, we critique Islam because there are many aspects of Islam that need to be critiqued. In particular, we seek to oppose Islam’s apostasy codes, which are oppressive and lead to persecution.

We have found it is quite difficult to get some people to listen to our stories because they fear that acknowledging these issues will contribute to a critical view towards Islam.

The idea is that particularly reactionary teachings and aspects of belief that lead to critical judgements of Islam are in and of themselves prejudiced. The resulting logic of this is that Islam should have special privileges, in as much as basic human conscience and ethical critical judgement of people living in a secular culture should not apply, or be expressed, towards Islam.

The fact that criticism exists, is the offence.

Effectively, this is to propose a kind of proxy blasphemy code and apostasy code, wherein the liberal secular space defers to Islamic taboos. Dissenting Muslims and Exmuslims have to conform to these proxy codes too. Everyone else is free to critique their own religion, and other faiths and ideas too. But Islam must be protected.

However, Muslims are free to critique all religions, belief systems and moralities, because evangelising Islam, and proffering critique and judgement is not only a divine prerogative, but the closing down of ethical, critical judgement towards Islam is also a divine right.

As we can see, this is an ethical and moral mess.

This is an aspect of liberal relativism that is morally flawed and unsustainable without damaging basic principles of liberal secularism. It also means that aspects of Islam that need to be criticised, like Islam’s apostasy codes, remain unexamined, and with that authority unquestioned, their capacity to hurt people and cause harm increases.

Another fear is that being critical of aspects of Islam manifests in prejudice towards Muslims, and this is an understandable response given how parts of the far-right do project generalising narratives of communal responsibility on Muslims. As Exmuslims, we understand this, because being from ethnic minorities ourselves (apart from growing numbers of former white converts) we are also prone to be in the targets of bigots who project their hostility onto anyone who ‘looks’ Muslim, whatever that is supposed to be.

The key to dealing with this is for the Left to take ownership of the issues that need to be critiqued, and do so through the prism of liberal secular values, so that they cannot be co-opted by the nationalist right, who have agendas that are not tolerant.

Sadly the instinct of relativism too often prevents this reckoning from occurring. The silencing of Exmuslims voices is the norm, although we are trying to change this.

There are three main layers of silencing of apostates voices. The first layer is the hardcore religious silencing, which includes notions that we deserve to be killed and harmed. Under that is a second layer of some Muslims who may not agree we should be persecuted, but don’t want to have these problematic aspects or religion talked about, because of feelings of embarassment, fear of the consequences, or cognitive dissonance regarding apostasy / blasphemy codes. The third layer underneath this is the relativism of white liberals who are often in concordance with silencing instincts over these issues, including silencing of Exmuslims, for the reasons we outlined earlier. Often, relativist liberals simply pretend we don’t exist.

But silencing never works, and it only increases the problems.

It is important to understand that anti-Muslim bigotry is real. At the same time, the reality of the need for Islam to be critiqued has to be acknowledged by the Left, and by Muslims who live in liberal secular democracies too.

epilogue: Some of these issues were touched on by a Pakistani-Canadian Exmuslim called Eiynah, in a response to the recent heated debate over Ben Affleck’s appearance on Bill Maher’s show. You can read it here. Please do check it out.

Somebody over at the Guardian, very much liked that comment above under Mr Brown’s article, it has been selected as the Guardian Pick and appropriately highlighted (I’d like to think that it might have been Mr Brown himself, but I might be wrong about that).

So yes, those of us that criticise Islamic thinking do indeed find the ideas to be abhorrent, and yet at the same time we also feel compassion for those within because they are just as much the victims, not just from a theoretical viewpoint, but also because some of us once embraced such views ourselves and have learned how to let go of such bad ideas.