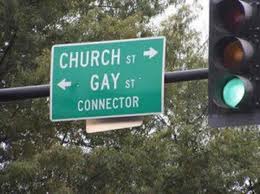 The news is that Rev Tom Gordon, a Church Of Ireland Anglican priest, has formally entered  into civil partnership with his boyfriend of 20 years, and has also received the full support of his bishop, the Rt Rev Michael Burrows. Now normally when a couple get together it is not public news to anybody except their friends who wish them well, so why is this an exception? I need not explain, you all know, and are all familiar with the anti-gay rhetoric that is very pervasive amongst many shades of belief.

What is praise worthy here is that this union is official, but sadly (I bet you could see this coming), all the believers don’t think the same way …

after Saturday’s report in the News Letter, it is understood that senior figures from the traditional wing of the church — which is largely based in Northern Ireland — met to discuss how they will respond.

One source involved in the discussions said that conservative and evangelical members of the church felt that they had been “catapulted into the same position as the Church of Scotland” where the acceptance of ministers in civil partnerships has threatened a split.

You can read the full article here.

Now, all this causes me to ponder why believers make such a fuss about gay relationships. The first most obvious observation is that the bible condemns it. In Leviticus 18:22 it clearly states it to be an abomination … end of debate. This stance has a number of very obvious problems:

OK then … why the big fuss about being Gay, but nobody bats an eyelid if folks order Lobster which is also apparently an equal abomination? The point here is that the claim that “it’s in the bible” is not a reasonable argument. If folks claim it to be a book of moral guidance but only pick the bits they like and discard the rest then how can they  claim it is a moral standard – that’s just daft.

Right then, so why is being Gay wrong? the answer is simple, it’s not. There is no logical or moral reason to take such a stance. The Christian claim that it is immoral is simply bigotry of the very worst kind, and all such a stance does is to illustrate that Christianity itself is inherently immoral at its core.

There is no justification whatsoever for gay hostility. Some might then counter that with, “Ah, but it’s not natural“. Sorry, but they don’t get to play that card either, it is perfectly natural and normal for a percentage of a population to be bonded to members of the same-sex, and is not in any way unique to humans. It has been observed and confirmed right across the entire animal kingdom amongst birds, mammals, insects and fish. Every single species has been found to exhibit homosexual behaviour to some degree; no exceptions have ever been found, it is perfectly natural and normal, so the claim that it is “unnatural” does not stand up to scrutiny either.

Now that just leaves us with one final item, I’d like to offer my heartfelt congratulations to the Rev Tom Gordon and his partner, and wish them all the very best for the future together. I do hope you are in a position to be able to do the same. If not, then I suggest that you might like to rethink this entire issue.