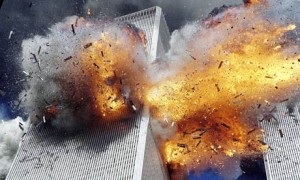 The Guardian has a nice short summary article that debunks the 9/11 truther claims, here is a quick extract …

The twin towers were destroyed by controlled explosion

Truthers say video footage of the buildings falling points to demolition due to the way the towers bend before collapsing. Also, there appear to be explosions as the windows blow out, floor by floor, from the top downwards. One US academic claims to have tested samples from the wrecked towers which show the presence of chemical residue, suggesting explosives had been used.

But in controlled explosion demolition experts collapse a building from the bottom not the top. Experts say the windows were blown out as each floor collapsed on to the one below, sending debris and office equipment flying out.

It would also have taken considerable work, which would not have gone unnoticed, to plant sufficient explosives the length of the buildings to bring them down.

The Pentagon was hit by a missile, not a plane

The evidence for this, say sceptics, is that the major damage to the building comprised a roundish blast hole, not the more extended destruction some say would be caused by aeroplane wings. Truthers claim parts of a scrapped plane, including the tail, were moved to the Pentagon as part of the fabrication.

This theory ignores the considerable evidence of the bodies of passengers and crew at the site which were photographed. Thousands of people saw the plane circle then fly into the Pentagon. Some quickly photographed the scene. Anyone planting plane debris at the site afterwards would surely have been seen.

You can click this link to go read the rest.

Now, I must confess, I grow quite frustrated when faced with the crassly stupid 9/11 truther claims. Why? Well basically because all the claims made have been well and truly debunked. Key the phrase “9/11 conspiracy” into Google and the top hit gives you the wikipedia article “9/11 conspiracy theories“. There, it goes through it all in great detail, I need not repeat it all, if curious you can click the link and read just as well as I can.

Another interesting take on all this is the book, “Among the Truthers“, by Canadian journalist Jonathan Kay. He specifically examines the 9/11 Truth movement, but also covers other modern conspiracies such as the Bilderberg Group, the anti-vaccination movement, and Reptilians. The Wikipedia article on the book is found here. If this is a topic of interest, then you should get the book, its worth a read. What makes this worthwhile is that Jonathan has emerged with his sanity intact after immersing himself for several years in the wilder precincts of these conspiracy theories, so writes about all that he found from the inside, and also offers some interesting thoughts on why such ideas take root.

Of course, you can completely bypass all the 9/11 opinions and just read the commission report itself, it’s a full and complete account.

The point I’m making is simple, all the information needed to rapidly debunk 9/11 bunk and arrive at a reasonable evidence-based conclusion is out there and freely available, so anybody making any weird truther claims has no excuse … except perhaps gross stupidity, or is a crank drawn to the conspiracy theory after a mid-life crisis.