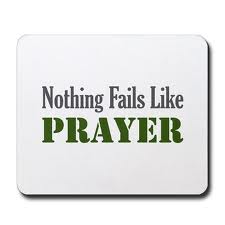 There is news that a Christian couple have been given a ten year jail sentence. Yikes, sent to jail for being a Christian, sounds horrendous … what backward nation of barbarians have inflicted this dire punishment, who was it that persecuted these poor souls … Iran, Iraq? … Nope, it was the state of Pennsylvania in the US …

Huh!! just for being believers!!! well yes, that was the root cause here.

Its a truly tragic story and involves the utterly pointless death of their two year old son, Kent. They belonged to a church that did not believe in doctors, but instead relied upon prayer … that’s the strange belief that when you talk to an imaginary friend he will take care of you. Just to be 100% clear, real double-blind clinical trials have been conducted and proven that nothing happens. There are of course believers who do tests and make extraordinary claims about results, but apply the true double-blind standard and you quickly eliminate bias and reveal zero effect. If curious, click here, to read a good summary of the various trials that have been conducted.

When 2 year old Kent became ill with a cold that progressed over two weeks to bacterial pneumonia, ineffective prayer was deployed … and what happened? … their son died. What would have happened if they had opted to call a doctor? Easy, Kent would be alive today, because pneumonia is easily treatable. While the prison sentence simply heaps tragedy upon despair (the couple have six other children)  its vital for several reasons. These other children need protection from their parents, they are at risk. This is not a lone isolated case, about 6 children die every year in the US due to misguided faith.

Is this truly the responsibility of the parents? Well, legally yes. While freedom of thought allows them to decline medical care for themselves, they have no right to impose such misguided nonsense on innocents who are not yet old enough to make such choices. That’s the true moral high-ground. However, beyond this legal observation is the fact that this poor couple are themselves victims, they have been deceived and mislead by their church. It is reported that when representatives from the church were asked about members who ignored their beliefs and took the medical option, they replied …

Church elders do not shun members who seek medical care, although they pray that they make a different choice next time, he said. He notes the high number of deaths blamed each year on medical mistakes – as many as 100,000 a year in hospitals alone, according to a widely discussed Institute of Medicine study from 1999.

What a completely immoral and crassly stupid statement, that very much allows me to observe that these folks more or less self-identify as clueless gobshits. Just to give you more of an idea of their disconnect from reality … try this extract from philly.com here …

Their pastor, Nelson A. Clark of the First Century Gospel Church of Juniata Park, which teaches healing through prayer and eschews medical care as evidence of a lack of faith in God, seemed crushed by the jury’s conclusion.

The Schaibles’ 2-year-old son, Kent, died after fighting what began as a cold and progressed over two weeks to bacterial pneumonia. According to testimony, Herbert Schaible, 42, and Catherine Schaible, 41, prayed for their son and thought he might be getting better.

But on the night of Jan. 24, 2009, the Schaibles discovered that Kent was dead. They called the church’s assistant pastor, Ralph Myers, who came to the house, joined the parents in prayer, and then called a funeral director.

“We tried to fight the devil, but in the end the devil won,” Herbert Schaible told homicide detectives in a statement read to the jury during the trial, which began Tuesday.

To read more about this utterly tragic case, you can click here