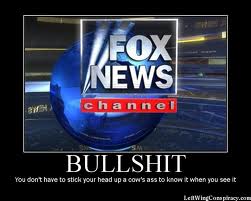 Official Fox News policy is to simply make it up … I’m not kidding, staff have been directed to push fiction as fact. We all knew it, in fact when faced with a believer in woo quite often the first question that pops into your head might be, “Do you by any chance get all you information  from Fox News?“, and of course if that’s a negative then its safe to assume it is most probably that other master propagator of woo … Oprah. But lets put Oprah to one side and savor the thought of slicing and dicing her nonsense for another day.

Its been in the news, but not on Fox (I wonder why) that … well, I’ll just cut and paste Media Matters, they put it ever so well …

In the midst of global climate change talks last December, a top Fox News official sent an email questioning the “veracity of climate change data” and ordering the network’s journalists to “refrain from asserting that the planet has warmed (or cooled) in any given period without IMMEDIATELY pointing out that such theories are based upon data that critics have called into question.”

The directive, sent by Fox News Washington managing editor Bill Sammon, was issued less than 15 minutes after Fox correspondent Wendell Goler accurately reported on-air that the United Nations’ World Meteorological Organization announced that 2000-2009 was “on track to be the warmest [decade] on record.”

Yes indeed … f**k the facts … just do what you boss tells you and simply make it up. You can read the article all about this by clicking here. Oh and least you wonder, Climate Change is a fact. However, if for some reason you doubt that, then why not pause, take a quick break, and surf on over the the NCDC (National Climate Data Center) and check out their FAQ here. Still not convinced, why is that? Oh wait, let me guess, you watch Fox News … right? Well, you better start to digest the news that Fox News lie and distort the truth … thats the real news.

Tempted to think that perhaps this is a once only intervention, and that perhaps Sammon simply felt passionate about this one topic, strongly enough to lean on his staff a bit, but does not do so normally? Ah no … sorry, think again. This is not the first time, the previous time he was caught distorting the news prior to this event was way back in … oh let me see … 6 days prior to this. The news story here on Media Matters reports …

At the height of the health care reform debate last fall, Bill Sammon, Fox News’ controversial Washington managing editor, sent a memo directing his network’s journalists not to use the phrase “public option.”

Instead, Sammon wrote, Fox’s reporters should use “government option” and similar phrases — wording that a top Republican pollster had recommended in order to turn public opinion against the Democrats’ reform efforts.

So if interested in good Journalism, then go pick up a copy of the New York Times, or perhaps the Washington Post. However, if you would prefer to give your head a thorough brain-wash with an extra republican spin-cycle, then Fox News is just what you are looking for.

Tempted to think I might be a little biased here … well yes indeed I am, I’m strongly opposed to folks who simply make stuff up and then push it out as fact.

1 thought on “Fox News = Fictious News … its been confirmed.”