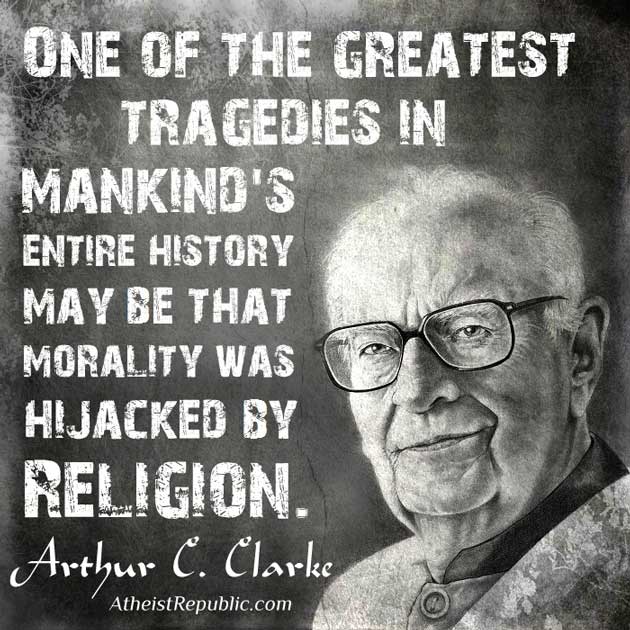 OK, so let’s set a bit of context here. The focus is that I am writing about religious morality, or to be a bit more specific, beliefs that tells you what is and is not right or wrong. Clearly the beliefs that do exactly this tend to dominate today, specifically Islam and also of course Christianity. Now here comes an interesting observation, if you step back and consider the history of human beliefs and how they have evolved, then you can’t avoid the observation that it was not always like this. Prior to the emergence and eventual dominance of Christianity, religious belief did not dictate morality and instead was focused upon rituals and sacrifices as a way to appease the gods. This was perhaps very much driven by a desire to gain control over random things that are beyond our normal ability to do anything about, and so it was an expected public duty.

We can perhaps understand why it was like that, and why the appeasement of the various collections of gods naturally evolved, be they Greek, Norse, Roman, Celtic, or some other variation, because such behaviour is observed within other non-human species.

This emergence of religion is perhaps the ultimate Skinner box.

What is a Skinner Box?

American behaviourist, author, and inventor, Burrhus Skinner, discovered back in the 1940s that the humble pigeon appears to use rituals. Skinner famously placed a series of hungry pigeons in a cage attached to an automatic mechanism that randomly delivered food at regular intervals with no reference whatsoever to the bird’s behaviour. He soon observed that the pigeons associated the delivery of the food with whatever chance actions they had been performing as the food was delivered, and that they subsequently continued to perform these same actions to get more food …

One bird was conditioned to turn counter-clockwise about the cage, making two or three turns between reinforcements. Another repeatedly thrust its head into one of the upper corners of the cage. A third developed a ‘tossing’ response, as if placing its head beneath an invisible bar and lifting it repeatedly. Two birds developed a pendulum motion of the head and body, in which the head was extended forward and swung from right to left with a sharp movement followed by a somewhat slower return”

‘Superstition’ in the Pigeon, Journal of Experimental Psychology #38, 1947. Burrhus Skinner.

Our primitive ancestors responded in exactly the same manner to random events in the world around them, and so over time they developed a comprehensive set of rules as they strove to appease the gods to ensure that they as individuals or as a community would be rewarded. Over successive generations these rules evolved into quite sophisticated belief systems, often involving complex rituals.

You can read more about Skinner Boxes here – https://en.wikipedia.org/wiki/Operant_conditioning_chamber

Why did religion start dictating Morality?

Clearly something changed because roughly about 2000 years ago beliefs evolved from simply being a way to gain control over random events into something that dictated morality – be a good person, control you sexual desire, help others, and you will be rewarded in the next life.

A common reason often promoted for this amongst evolutionary psychologists is that it promotes social cooperation and thus cultures that adopt such moralising beliefs gain an advantage, and that strikes many as a wholly reasonable answer. However, recent research now suggests that there might be a better explanation.

Life History theory finds that behaviour is dictated by environmental factors. If resources are sparse and rare, organisms go for a “fast life” strategy – early reproduction, and pair bonding that is very impulsive and aggressive. Immediate rewards take priority over a longer term investment. In other words, because death can pop up at any moment, your best bet for passing on genes is this mode of behaviour.

If however your environment is far more favourable, then a “slow life” strategy kicks in … later reproduction, deeper investment in pair-bonding, etc…

Within humans there is an ability to switch between fast and slow life strategies and this is driven by environmental factors. If the environment favours it, then individuals will switch from being impulsive and aggressive to investing in family and romance.

About 2500 years ago around the mediterranean society became more affluent for the elite, and the slow strategy started to dominate for them. This was really only true for the top tier of society and was not true for everybody else. Net effect was that the top tier adopted the slow strategy while everybody else continued with living fast and dying young. In an environment where you are living slow while everybody else is living fast leaves you at a clear disadvantage … you forgive when they take revenge, you remain faithful while that take every sexual opportunity going, etc…

However, if those in charge living the slow life strategy then adopt and dictate moralising beliefs as the official beliefs, then that becomes a means of asserting control over those driven by environmental factors to live the fast life strategy, and so a slow strategy is dictated that offers rewards to those who embrace the belief, and promises punishment for those that do not.

As long as this prosperity remains then the inevitable outcome is the decline and demise of moralising beliefs such as Christianity and Islam because they no longer serve a social need. We do already observe that it is the young who are far less lightly to embrace the currently prevailing beliefs, and so as the older far more religious individuals pass, then they will be replaced by a population of humans who no longer embrace beliefs that dictate slow-life because they quite naturally adopt slow-life strategies anyway.

If this is indeed correct, then the demise of both Islam and also Christianity is inevitable.

The various modes of worship, which prevailed in the Roman world, were all considered by the people, as equally true; by the philosopher, as equally false; and by the magistrate, as equally useful. –
Edward Gibbon (1776)(Chapter II: The Internal Prosperity In The Age Of The Antonines.—Part I. Second Paragraph)