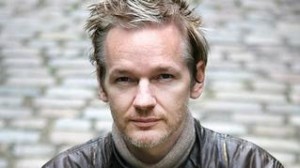 Michael Moore has posted $20,000 of his own money to bail Julian Assange and has offered all his IT facilities to keep Wikileaks rolling … why?

He makes a very good case with points such as these …

We were taken to war in Iraq on a lie. Hundreds of thousands are now dead. Just imagine if the men who planned this war crime back in 2002 had had a WikiLeaks to deal with.
…
Take a look at this photo. That’s Mr. Bush about to be handed a “secret” document on August 6th, 2001. Its heading read: “Bin Ladin Determined To Strike in US.” And on those pages it said the FBI had discovered “patterns of suspicious activity in this country consistent with preparations for hijackings.” Mr. Bush decided to ignore it and went fishing for the next four weeks.
…
But if that document had been leaked, how would you or I have reacted? What would Congress or the FAA have done? Was there not a greater chance that someone, somewhere would have done something if all of us knew about bin Laden’s impending attack using hijacked planes?
…
Or what if the public in 2003 had been able to read “secret” memos from Dick Cheney as he pressured the CIA to give him the “facts” he wanted in order to build his false case for war? If a WikiLeaks had revealed at that time that there were, in fact, no weapons of mass destruction, do you think that the war would have been launched — or rather, wouldn’t there have been calls for Cheney’s arrest?

Demoracry is all about openness and transparancy, it is your responsibility to hold those you vote for accountable, anybody opposed to such openness is the true enemy of demoracry.

Julian Assange is charged with a crime, so if we wish to see justice prevail then it is vital that we do not permit this charge to be utilized as a political weapon. Nor should we see the charge dismissed because nobody should ever be above the law. His accusers should have their day in court and if he is found guilty, then Mr Assange needs to go to jail, but if he is found innocent, he should go free.  He should not be treated any worse or any better than any other person accused of such offences who is subject to a live extradition process.

Julian Assange is not Wikileaks. The press obsession with him as Wikileaks incarnate is not justified, the Wikileaks concept is far bigger than he is, and is far too important to be tightly coupled to one lone individual.

You can read a lot more details on Michael Moors thoughts on it all by clicking here.