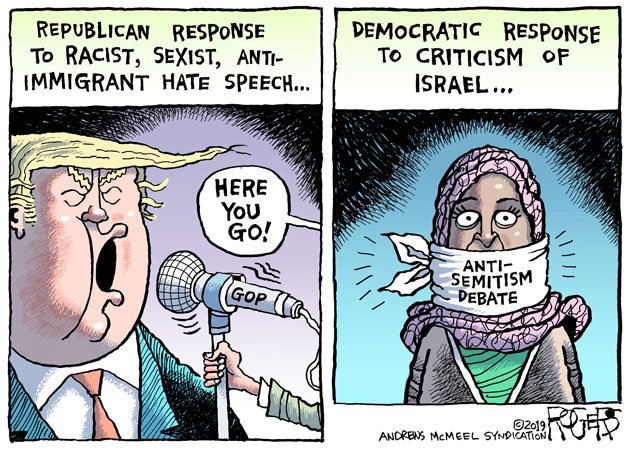 Once again it is time to ponder over the selection of this week’s collection of news items that consist of the weird thoughts and actions that flow from that blend of utter lunacy, namely right-wing extremism and religious fundamentalism. This week there has been one event that underlines how these truly bad ideas often lead to actions that have dire consequences – The utterly tragic deaths in New Zealand.

The death of innocent people in New Zealand at the hands of a right-wing extremist is not the act of an individual who was mentally unbalanced, but instead was the manifestation of right-wing radicalisation in our midst. When you live with a constant stream of bad ideas that go unchallenged, then inevitably there are consequences. We live in an age where one political party has given a platform to far-right xenophobia and refuses to call it out, but instead nurtures it. The result is a climate of intolerance that demonises people for the “crime” of simply having a specific cultural inheritance.

Not sure about that?

In response to the murder of 49 people by a white supremacist, Trump responded by claiming that white supremacy is not a big problem, then proceeds to rant about the “invasion” of the US by foreigners and promptly vetoed Congress so that he can build his folly. With a nod like this, finding others falling into step with a flurry of utter BS should not be a surprise ..

The education of Alexandria Ocasio-Cortez

Basically they hate anybody who is not them.

Sodom got a mention

Mike Heath: There Is a ‘Direct Correlation’ Between Sodom and Gomorrah and America Today…”we’re beginning to see a direct correlation between what actually happened [in Sodom]“…

Hating Hilary is still a thing …

Chris McDonald asserts that Hillary Clinton “literally” sold her soul to the devil….

And other Old Tropes still pop up …

Laura Loomer proclaims that “Barack Hussein Obama is a Muslim.”…

Dave Daubenmire says that “most of those who are in Washington, D.C., are possessed” by evil spirits …

(Being a Trump supporter who tends to have a meltdown if anybody dares criticise his beloved idiot-in-chief, I suspect he does not mean Trump)

Mike Pence is well-known as  “the face of anti-LGBTQ hate in America”. This past week proved to be rather interesting. The Irish Taoiseach, (that’s the title of the guy elected to run Republic of Ireland), came for a visit to the US. During his visit, Leo Varadkar, the Taoiseach, attended an early St Patrick’s Day breakfast at the vice-presidential residence at the Naval Observatory, and of course he brought his partner with him. Leo Varadkar is gay and so Mike Pence was basically obliged to suck it up, welcome him and his partner ,and host them for a formal Breakfast …

During his speech Leo Varadkar took time to direct some very pointed remarks to Pence. He was truly diplomatic (diplomacy is the fine art of telling people to F**k Off in a manner that enables the listener to look forward to the journey) …

“I lived in a country where if I’d tried to be myself at the time, it would have ended up breaking laws,” he said. “But today, that is all changed. I stand here, leader of my country, flawed and human, but judged by my political actions, and not by my sexual orientation, my skin tone, gender or religious beliefs.”

There is no way Pence could snub the Irish Taoiseach without also offending vast numbers of voters who have an Irish ancestry, so poor old Pence had to stiffel his bigotry for the day, smile, and pretend he was good buddies with Leo.

Is Pence really that much of a bigot?

Indeed yes he is …

Pence’s history of anti-LGBT stances during his time in office as a congressman and governor of Indiana and throughout much of his life has been well documented, so much so that Trump once joked about the hatred as if it was no big secret. During a conversation on gay rights with legal scholars, Trump once interrupted and gestured to Pence, saying, “Don’t ask that guy – he wants to hang them all!” according to the New Yorker.

Pence’s anti-LGBT bona fides include supporting so-called conversion therapy, to signing a religious freedom bill that would have worked as a license to discriminate against gay people. More recently his wife Karen Pence came under fire for teaching at a Christian school with policies of banning LGBT teachers and students.

My heart truly bleeds for the suffering that Mr Pence has had to endure. Meanwhile Leo gets my vote every time.