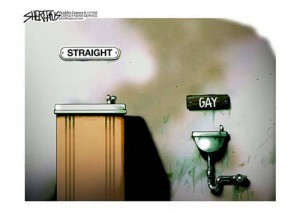 John Sullivan, a UKIP party candidate, up for election this coming thursday, has made a series of anti-gay Facebook comments, including congratulating Russia for banning gay Pride, and comparing gays to termites.

This of course is the same guy who also asserts that feminism is evil. Well, he has now suggested that Victorian style regular physical exercise be reinstated in schools as it apparently causes releases of tension which prevents homosexuality.

(Are you ready to roll your eyes yet? well hang on to that response for a few ticks, there is more to come).

Is he simply a loan loon and general embarrassment to UPIK? Nope …

While, Olly Neville, the former chairman of UKIP’s Young Independent wing, was recently fired from his position for backing marriage equality.

Now least you wonder, here comes the sciency bit, there are studies that demonstrate a physical difference in the brain structure between gay and non-gay people, it is not a choice, you cannot simply be “converted”, nor is it just a lifestyle choice (that will be a relief to my wife, she need not worry that I’ll turn up one day and a announce, “Hey I’ve been converted”). If you still are in doubt, OK then, answer this question, when exactly did you choose to not be gay, what prompted that “choice”? What was that you said … oh, you said that you did not choose and were simply born that way … well now hopefully you get it.

Humans once discriminated and even enslaved people on the sole basis that they had a different skin colour, but came to the realization that this was morally wrong. In exactly the same manner, our culture has been waking up to the fact that discrimination on the basis of sexual orientation is equally immoral. Alas sadly large chunks of UKIP appear to be still asleep.

I do truly understand the disenchantment with the three mainstream parties, but tempting as it might be to consider voting for UKIP on thursday, pause and consider the thought that they are not actually standing on the basis of what they will do, but rather have a platform that consists entirely of a long list of the things they oppose. With no clear statement of what they would actually do, voting for the nutters is not an answer.

[For the non-UK folks who are wondering, no it is not a general election, just local council elections, a sort of litmus test for all the parties to take the temperature and gauge public political leanings. What can also happen is that some will indeed vote for the nutters, not because they support them, but simply to give a good kicking to the mainstream, it is quite possible that we will see UKIP grabbing a lot of seats, but given how truly kooky and xenophobic those guys are, even having them sit on local councils might not be a great idea]