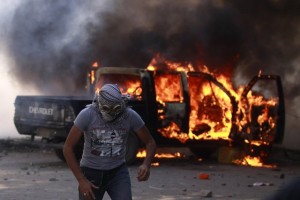 A sadly common pattern is that those that perpetuate violence in the name of Islam often tout US foreign policy as a form of justification. Well, Thomas L. Friedman, a journalist, columnist and author, has written a piece that effectively demolishes this myth. Mr Friedman is no isolated and inexperienced hack issuing bulletins from an ivory tower, he lived in Beirut during the civil war, and won  the Pulitzer Prize for International Reporting for his dispatches at the time, and so he is a man truly worth paying attention to,  much of what he writes is deeply insightful.

The Boston Bombings have motivated his latest article, from which I’m giving you a longer than normal extract. Responding to the news that the Bombers were motivated by the American wars in Iraq and Afghanistan, he writes …

This is a popular meme among radical Muslim groups, and, to be sure, some Muslim youths were deeply angered by the U.S. interventions in the Middle East. The brothers Tsarnaev may have been among them.

But what in God’s name does that have to do with planting a bomb at the Boston Marathon and blowing up innocent people? It is amazing to me how we’ve come to accept this non sequitur and how easily we’ve allowed radical Muslim groups and their apologists to get away with it.

A simple question: If you were upset with U.S. wars in Iraq and Afghanistan, why didn’t you go out and build a school in Afghanistan to strengthen that community or get an advanced degree to strengthen yourself or become a math teacher in the Muslim world to help its people be less vulnerable to foreign powers? Dzhokhar claims the Tsarnaev brothers were so upset by something America did in a third country that they just had to go to Boylston Street and blow up people who had nothing to do with it (some of whom could have been Muslims), and too often we just nod our heads rather than asking: What kind of sick madness is this?

It’s a double non sequitur when it comes from Muslim youths who lived and studied in America, where, if you’re upset about something, you have many ways to express your opposition and have an impact — from organizing demonstrations to publishing articles to running for office. In fact, an American guy named Barack, whose grandfather was a Muslim, did just that. And he’s now president of the United States, a job he’s used to unwind the wars in Iraq and in Afghanistan.

Moreover, some 70,000 people, most of them Muslims, have been killed by other Muslims in the Syrian civil war, which the U.S. had nothing to do with — although many Muslims are now begging us to intervene to stop it. And every week innocent Muslims are blown up by Muslim suicide bombers in Pakistan and Iraq — every week. Thousands of them have been maimed and killed in attacks so nihilistic that the bombers don’t even bother to give their names or make demands. Yet this does not appear to have moved the brothers Tsarnaev one iota.

Why is that? We surely must not tar all of Islam in this. Having lived in the Muslim world, I know how unfair that would be. But we must ask a question only Muslims can answer: What is going on in your community that a critical number of your youth believes that every American military action in the Middle East is intolerable and justifies a violent response, and everything Muslim extremists do to other Muslims is ignorable and calls for mostly silence?

Indeed yes, I am most distinctly being deafened by that complete silence, but it is perhaps to some degree understandable.

He is truly correct to make the observation that this is not something to tar an entire culture with. Most Muslims, like almost every other human on the planet, are decent and honourable, and while they may indeed have a belief in Allah in some vague sort of way and enjoy the various festivals, they simply wish to live in peace and also leave others alone to do the same. However  nestled in the heart of the culture resides the core believers, those that have been ensnared by the insane rhetoric and have embraced the religious bullshit as literal truth … a truth that motivates them to strike out violently against anybody and everybody who is not conforming to their specific variation of belief, and that includes not only non-Muslims, but all other variations of Islam.

The religious motivation is clear, it is the embrace of an Idea that is morally, ethically and rationally as wrong as it is possible to be. Such thinking thrives because it tolerates no criticism, and reacts with extreme violence against any any all dissent. Knowing this and understanding it allows us to grasp why the majority within the community remain silent; they have no desire to paint a target sign on their own backs. While such silence may indeed give a cloak of protection to such fanaticism, we need not assume it implies that most actually condone any of it, they simply wish to not become a target themselves.

If they cannot speak out, then who will? I will … and so can you. We have one distinct advantage on the Internet that grants us a rather unique protection, and while we can indeed reach out with words of fact based criticism that strip the ideas naked and reveal such thinking to not only be truly evil but also wrong. When faced with this, they cannot strike back violently, but instead stand helpless due to the geographical separation.