It is almost inevitable that when something big happens, an assortment of conspiracy theories will rapidly arise as a means to cope and to also explain. So what “theories” has the Boston Bombing given birth to? We can obviously dismiss wild assertions that come with exactly zero evidence, but what about those that do have some evidence that appears to conflict with official accounts, is there any real substance to any of them? Well, lets take a quick look at five examples. 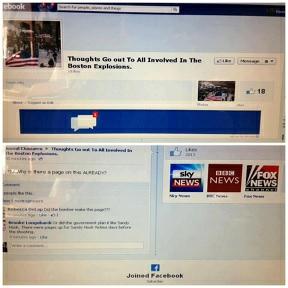 There are claims that a number of the Facebook Boston Marathon bombing-related pages that were created after the tragedy to offer condolences or collect donations for victims have creation dates that indicate that they were created prior to the event.

“Ah Ha” shout the conspiracy theorists, “Here is proof that this was all planned by …” (insert your favourite target here).

Pictured on the left is a FB page entitled “Thoughts go out to all involved in the Boston explosions”. It is gone now, but at the time it bore a “Joined Facebook” date of Saturday, April 13 (two days prior to the bombing).

The problem with this claim is obvious, it simply reflects a lack of understanding of  how Facebook works. “Joined Facebook” dates by themselves do not provide reliable timelines documenting the creation date of a Facebook page for a specific purpose. Facebook page names can be changed and pages which were initially created prior to an event for other reasons can and often are renamed/re-purposed.

2: The Boston Globe Tweeted about explosions prior to the event

On the day of the event the Boston Globe tweated this …

“Ah Ha”, claim the conspiracy folks, “Here is proof that officials planned a “controlled explosion” at the same time as the marathon explosions.

Er no, this tweet went out after the bombings, not before it. Apparently they had found a suspicious package and were dealing with it in an appropriate and safe manner.

3: There were no victims, just actors

Pictures have been presented as “proof” that those injured in the Boston Marathon bombing are not who they claim to be, but instead were “actors” doing a staged event. Here is an example of one that claims that a U.S. Army lieutenant who lost both his legs to an IED explosion in Afghanistan in November 2011 played the role of victim in Boston. 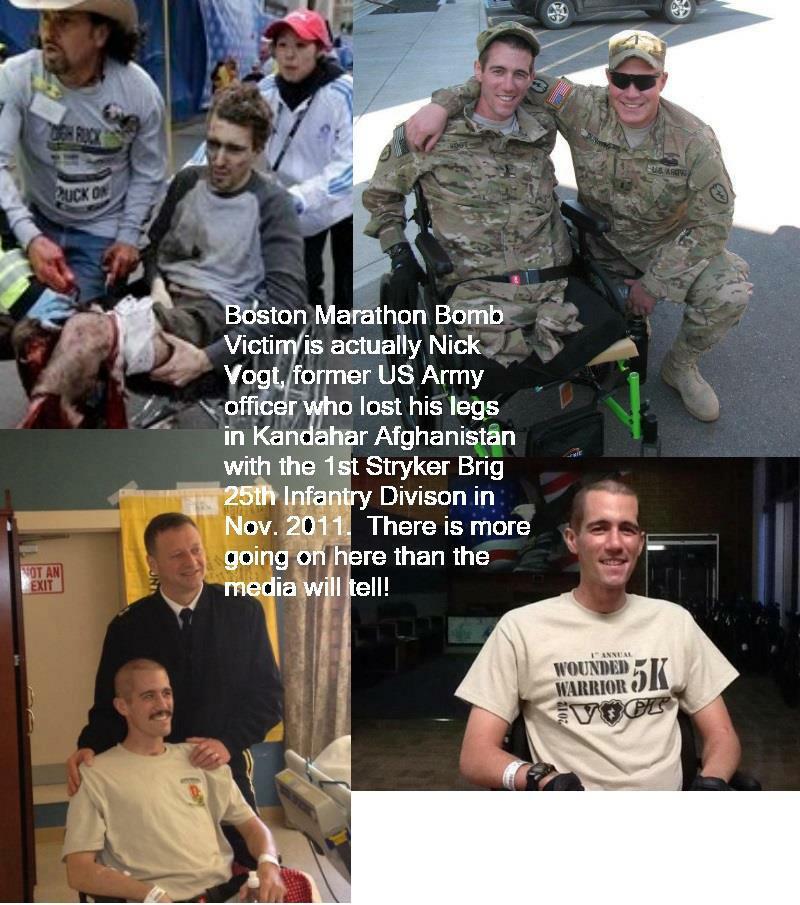 Nope, wrong, these are different people …

College student Dan Lampariello, while taking pictures of the race, captured the moment when one of the bombs exploded. What is of interest to many is that in that picture you can see a man on the roof of a high-rise building across the way as the explosion occurred on the street below 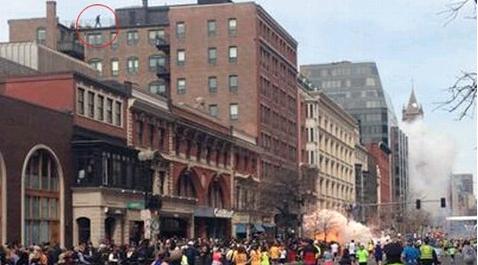 “Ah Ha”, some might exclaim, “Obviously this guy was involved in all this, so clearly this was all stage managed”.

Actually no, there is no evidence for that claim at all. People can and do go up on roof’s for a wide assortment of reasons, one very obvious one is that it renders a great view over a far wider area of what is going on below, but there are many other quite valid reasons. Take a second closer look, it appears to be a roof-top area that has a potted plant and some seating, so seeing somebody up there is not a surprise, he was most probably up and out for a quick smoke, or had simply been up taking a break. 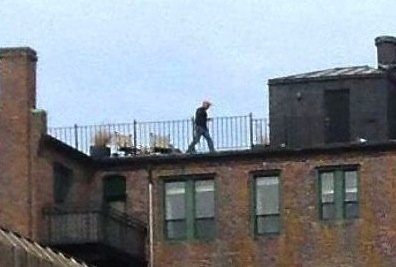 There is a claim that Suspect 1, Tamerlan Tsarnaev, was in perfect health when arrested … (see pic below) … 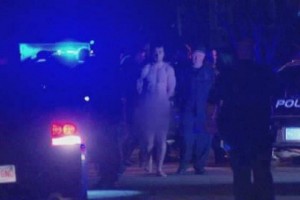 But that later, he mysteriously turned up dead … (there is a pic, but I’m not posting it due to its graphic nature). We all now know the details, as reported widely and verified by the doctor, he was taken to hospital unconscious and covered head to toe with many wounds from the previous gun battle, so many wounds that there was nothing they could do to save him, hence he died.

The guy pictured is not Tamerlan …

On Thursday night while police were hunting in Watertown, Mass. for bombing suspects Tamerlan and Dzhokhar Tsarnaev, at one point they arrested a naked man who looks a lot like Tamerlan.

Police say the naked man is not Tamerlan, despite various conspiracy theories going around the Internet.

According to the official account, Tamerlan died after a shootout with cops, riddled with bullets and shrapnel before being run over by his brother who was fleeing the scene in an

The Watertown police department got back to us via email just to say that the naked man was not Tamerlan Tsarnaev.

The shootout with the Tsarnaev brothers occurred on Laurel Street. Naked man [was] captured near Nichols and Dexter, literally down the street from the shootout.

Naked man was apparently stripped, questioned, clothed, questioned some more, and reportedly let go. It’s likely police stripped him because they were under citywide bomb threat and wanted to make sure he didn’t have a suicide vest, but the police did not comment on that.

Here is a news report of what happened …

Oh and least you wonder, no this guy was not driving around naked, when the police stopped him they feared he might be wired for explosives, so they demanded that he strip off. The witness in the above video confirms this.

When reporting the tragic event in Boston, the Minneapolis Star Tribune ran an advertisement for pressure cookers adjacent to the story. Given that we now know that the Boston bombings were carried out using pressure cookers packed with explosives, that is perhaps a bit of a “Yikes” moment. 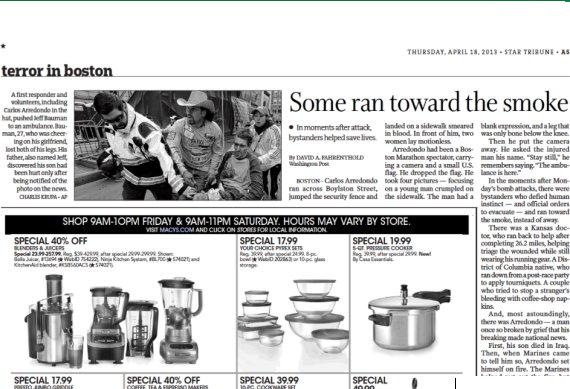 So is this evidence for a conspiracy of some sort? No of course not, life is like that, sometimes weird Coincidences do pop up. What this really tells us is that the pattern seeking engine sitting between your ears is kicking in and making a connection between two completely unrelated items.

Clearly there is no actual connection, and so there is no scope for building a conspiracy theory out of this … (anybody want to run with “Macy’s endorses and motivated Boston Bombers” … er no, I guess not). However, I think you get my point. People can and will make connections between unrelated things and then use them to weave a narrative that conforms to a specific world-view that they embrace.

So why Do Conspiracy Theories Proliferate?

When faced with things beyond our control or understanding, humans attempt to grasp and maintain control by constructing a narrative that can be manipulated to gain both control and understanding. Yes, I need not state the obvious, the control and understanding is an illusion and not in any way real, but given a choice between facing the truth that the world is a place where bad things can and do happen randomly for no reason or retaining the illusion, the more enticing narrative tends to dominate.

Now if you are wondering, “What the heck are you babbling on about?”, OK let me render this into very simply terms.

American behaviourist, author, and inventor, Burrhus Skinner, discovered something very interesting back in the 1940s. Skinner famously placed a series of hungry pigeons in a cage attached to an automatic mechanism that randomly delivered food at regular intervals with no reference whatsoever to the bird’s behaviour. He soon observed that the pigeons associated the delivery of the food with whatever chance actions they had been performing as the food was delivered, and that they subsequently continued to perform these same actions to get more food …

One bird was conditioned to turn counter-clockwise about the cage, making two or three turns between reinforcements. Another repeatedly thrust its head into one of the upper corners of the cage. A third developed a ‘tossing’ response, as if placing its head beneath an invisible bar and lifting it repeatedly. Two birds developed a pendulum motion of the head and body, in which the head was extended forward and swung from right to left with a sharp movement followed by a somewhat slower return”
‘Superstition’ in the Pigeon, Journal of Experimental Psychology #38, 1947. Burrhus Skinner.

We respond in exactly the same manner to random events in the world around us. This not only explain why conspiracy theories arise, but also explains where religion comes from.  As our ancestors strove to grasp meaning and control out of chaos they crafted beliefs and rules to then appease gods to ensure that they would be rewarded. Over successive generations such rules evolved into quite sophisticated belief systems, often involving complex rituals.

What might strike some as rather odd is that those who embrace conspiracy theories do so with a passion that is akin to religious belief. Often the true believers are immune to all their “facts” being debunked and the core belief remains. It is not about intelligence, we might indeed like to think it is, but many of those who embrace such beliefs are not stupid. In fact, the smarter they are, the better they are at dreaming up ways to rationalize away all the debunking.

The prime driving force behind it all is our need to gain both control and understanding, not because of some mental defect, but rather because as humans we have evolved to layer patterns on to everything around us. This of course has given us a distinct survival advantage, but alas sometimes the patterns that pop up are a form of mental paradolia and yield patterns for things that are not actually real. Letting go of such patterns is quite hard for those who find both comfort and a sense of control and meaning in them.

We are all potentially prone to being trapped by such thoughts … Gods, Aliens, New World Order, etc… that is why encouraging an independent critical thinking mindset matters.