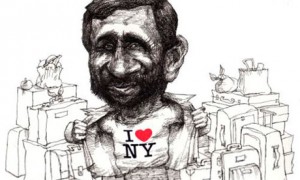 Iranian president Mahmoud Ahmadinejad has arrived in New York, along with 140 people.

At a time when many Iranians are struggling with economic hardship because of sanctions, this party of Iranian Royalty will be staying at the £1,000 a night Warwick hotel, now there is a real kick in the teeth for the people of Iran.

He does not honestly give a damn, because he is in his final year of office and under the current Iranian law cannot run for a third term.

While in New York, the Iranian president gave interviews to the American media, including CNN’s Piers Morgan, and invited a group of journalists for a breakfast meeting which the New Yorker’s David Remnick said was promoted as an exchange of ideas but turned out “to be a group interview”.

In response to Morgan’s questions about his views on homosexuality, Ahmadinejad said: “I’m sorry. Let me ask you this. Do you believe that anyone is giving birth through homosexuality? Homosexuality ceases procreation. Who has said that if you like or believe in doing something ugly, and others do not accept your behaviour, that they’re denying your freedom?”

In reaction to Ahmadinejad’s comments, the Iranian journalist Omid Memarian tweeted: “#Ahmadinejad’s response to #gay issue was not much different than what Romney or Santorum might h[ave] said.”

Reacting to Remnick’s question about an Iranian institute recently raising the bounty on the head of Salman Rushdie amid controversy over an anti-Islam film, Ahmadinejad responded: “Salman Rushdie, where is he now? … There is no news of him. Is he in the United States? If he is in the US, you shouldn’t broadcast that, for his own safety.”

Seriously!! … a not very veiled threat against Mr Rushdie from a head of state.

In honour of his last official visit to the United Nations, the International Campaign for Human Rights in Iran has released a short video demonstrating and highlighting systematic cover-ups accompanying the marked rise in human rights violations over the eight years of his presidency. The video features five Iranian-American human rights activists responding to some of Ahmadinejad’s remarks on issues ranging from human rights to sanctions, and from post-election protesters to Iran’s execution record , in interviews with Western and domestic media.The video features five Iranian-American human rights activists responding to Ahmadinejad’s remarks on various human rights issues in interviews with Western and domestic media. Ali Abdi (student activist), Bitta Mostofi (lawyer, activist), Manijeh Nasrabadi (member of Raha Organization), Mehdi Saharkhiz (son of political prisoner Isa Saharkhiz), and Sadra Shahab (student activist), featured in this video, are all young activists who are also well-known for their anti-war and anti-sanctions activities.

Here is that Video …

As you might, or might not be aware, Israel has been threatening to attack Iran and wipe out their nuclear ambitions. Their fear is quite real, having Nuclear arms in the hands of cretinous religious lunatics  is a truly terrifying thought.

It will not happen, they will not attack.

The far better alternative is to simply sit back and let the sanctions kick in.

The value of the Iranian rial has plunged since autumn 2011, causing widespread panic among the Iranian public, and fell a further 10% immediately after the imposition of the EU oil embargo. Sanctions tightened further when major supertanker companies said they would stop loading Iranian cargo. Prior attempts to reduce Iran’s oil income failed because many vessels are often managed by companies outside the United States and the EU; however, EU actions in January extended the ban to ship insurance. This insurance ban will affect 95 percent of the tanker fleet because their insurance falls under rules governed by European law. “It’s the insurance that’s completed the ban on trading with Iran,” commented one veteran ship broker.

Once Iranian banks were blacklisted by the EU, they were then disconnected from the SWIFT banking network in March this year. With that financial disconnection they can now only trade using cash or gold, and this make it almost impossible to import or export. This one step may lead to a complete collapse of Iran’s economy.

It was estimated that Oil sales earned accounted for about 50 percent of government revenue and 80 percent of exports, so what happens now is a waiting game, just sit back and let the military capability and economic activity shrink.

It will be a very painful process for the ordinary Iranians, but a damn sight better than bombing them.