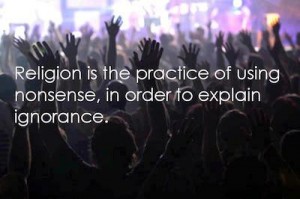 A chap who writes on News24 under the name “Charles Dumbwin” is having one of his many fits of verbal religious zealotry once again. It is all truly weird stuff that strikes me as an attempt to simply provoke a reaction. Whenever I stumble into one of his weird scribblings I find myself pondering the thought that it may in fact be somebody simply entertaining himself by attempting to push buttons and  provoke a reaction so that he may then bask in all the attention it generates … then again, the truly scary thought is that perhaps he actually believes these rants of weirdness. So which is it? Well, the consistent level of kindergarten lunacy within his outpourings leads me to conclude that he truly believes.

To give you an idea of just how bizarre he gets, lets take a look at his latest post entitled “Religious Atheist Bigot”. That title itself is … well what can one say except “daft”. How exactly can a non-believer be religious? He explains the “bigot” bit when he writes …

Are you a religious atheist bigot?  Are you quick to preach tolerance and respect for the rights of all people, but then show absolutely zero tolerance for someone who adopts a particular faith?

As fervently as the atheist fundamentalists stand up and preach about respect for other people and their choices, they seem to have no respect for people who choose to believe in God.

Their hypocritical position on religion removes any fragment of credibility they had left.

They’re the first to judge, point fingers and ridicule, but when challenged they go on the defensive and demand that others don’t judge them.

In what way exactly do non-believers show zero tolerance for the religious? All ideas and beliefs are of course open to criticism, but such criticism is not bigotry, so I can only conclude that Mr Dumbwin is incapable of differentiating between criticism and intolerance, and I also suspect that access to a dictionary would not help him. If he does indeed wish to talk about human rights and true tolerance then two of the most basic rights are

In other words, you can (if you wish) truly believe that magic invisible pink unicorns are real, that is a basic liberty, but having the freedom to think like that does not in any way inhibit everybody else from calling you a complete twat.

Personally I’m quite happy to have my ideas challenged, most non-believers are, so his claim that we do not wish to face criticism is complete bollocks.

The true irony here is the those who are actually guilty of religious intolerance tend to be the ultra-religious. They generally cling to one specific variation of belief and openly (when permitted) discriminate against those who hold different beliefs, or for that matter no beliefs at all. Not all the religious are like that, in fact the reality is that the vast majority of humans, with or withour beliefs, are not like that and are quite happy for people to believe whatever they wish, nor do they have a burning desire to impose their beliefs upon others, only the truly fanatical lean towards such intolerance. A couple of very obvious examples spring to mind …

Thinking the above is not the problem, the real issue is when they act upon such thoughts, and sadly they generally do.

Yes indeed, Mr Dumbwin advocates that non-believers are bigots because they dare to criticize such insane beliefs, but if challenged, he would have no hesitation to criticize and condemn every other alternative variation of belief that is not aligned with his. I also note that his entire posting is in fact criticism, the very thing that he is objecting to he is actually doing himself … oh the irony in that.

In some ways it does all strike me as a rather blatant manifestation of his insecurity, a demand that we should not step too close to his sandcastle least it crumble. If he does indeed wish to not have his batty beliefs analyzed, discussed and possibly mocked in public, then I would suggest that perhaps he should consider not posting them on a public forum on News24.