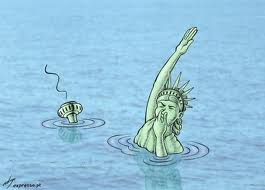 Some still quibble about the reality of climate change and truly do need to come to terms with the stark reality of the physical evidence. Is there any evidence that is beyond all such quibbling? Yes indeed, sea level. If the average global temperature is rising, then sea level will rise, you can’t avoid it.

As temperatures rise, the combination of thermal expansion and land based ice melting will lead to a sea level rise (SLR), so if it is getting warmer overall, there will be a measurable rising trend showing SLR.

This goes way beyond all arguments regarding local regional variations. For example, if you point to the vanishing Arctic sea ice, an attempted rebuttal might be an increase is Antarctic sea ice, and a claim that is is simply a normal regional variation, and perhaps also a claim that we have not been accurately measuring in the Arctic for long enough to really know. Sea level rise goes way beyond all this, either it is rising or it is not – in effect it acts as the ultimate climate change barometer.

So what is going on, is Sea level rising? 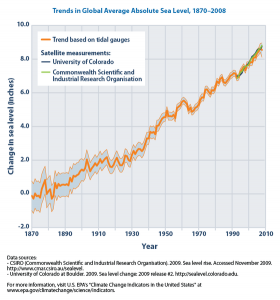 Yes it is, here on the right is the trend for the years 1870 to 2008. Now least you wonder, it truly has risen. Since 1870, it is almost nine inches higher, and is showing a rising trend.

How high can it go?

The trend is currently expected to continue for centuries, so you might be wondering just how high it can possible rise to. Well, there are some numbers for that.

What happens if all the ice in Greenland melts? – Sea level would rise by about 7 meters (20 feet).

Ah wait a moment, most of the worlds ice is actually in the Antarctic. It is covered with ice that is an average of 2,133 meters (7,000 feet) thick, so if it all melted, sea levels around the world would rise by about 61 meters (200 feet).

In other words, a complete melt gives us a sea level that is 260 feet (68 meters) higher than today.

If curious about those numbers, you can find then within Table 11.3 here. For the melting of those ice sheets, the sea level rise equivalent is calculated with allowance for isostatic rebound and sea water replacing grounded ice, and this therefore is less than the sea level equivalent of the ice volume.

What about all that vanishing Arctic sea ice, will that make a big difference? Actually no, it is floating on the sea, so it will not directly cause sea level to rapidly rise, but because it is rapidly going, it may indirectly lead to an acceleration of the melt of the Greenland ice sheet.

Worried yet? Well here is an additional thought; not only is sea level rising, but the rate of increase is accelerating. The rate of the global mean sea-level rise (~3 mm/yr; SLR) has accelerated compared to the mean of the 20th century (~1 to 2 mm/yr).

Right now, the best estimate is that by the end of this century (2100) sea level will be up by about a meter.

Scientists have now reviewed almost two decades of satellite data to build a new map showing the trend in sea levels, and what is interesting is that there are major regional differences. Here is a map from the BBC that illustrates this …

The above map was unveiled in Venice, Italy, at a symposium yesterday marking “20 Years of Progress in Radar Altimetry“.

So what are they up to? The BBC reports…

A key quest is to identify to what extent sea-level rise may be accelerating and to pull out any long-term oscillations in ocean behaviour that could confuse that signal.

The time to start worrying was long ago, it is now about understanding “how” it will unfold and not “if”, because it has been unfolding since at least the 1870s.