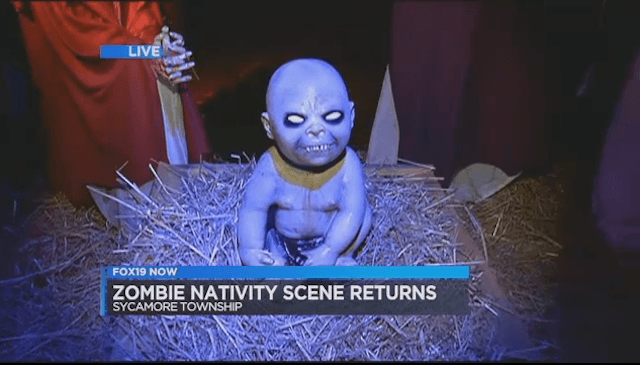 This is simply hilarious.

A chap named Jasen Dixon in Cincinnati, who is the manager of the local “13 Rooms of Doom”, has created a nativity display that is getting rather a lot of attention.

He has apparently done this before. Last year, he was ordered to take it down, and so this time around, he applied for a permit, but was refused, and then went ahead and put it up in his front yard anyway. As described in the New York Times …

The biblical scene comes complete with Mary, Joseph, undead wise men and a razor-toothed baby Jesus in a manger. A spooky version of “Silent Night” blares in the background. At night, rainbow-colored lights showcase the scene.

Why would he do this?

It is advertising for the haunted house he runs of course, and with all the media attention, it really is proving to be highly effective.

Generally most people, regardless of their specific beliefs or non-belief find it all entertaining and amusing, but for some … er no.

Yep, you guessed correctly, it is of course some deeply religious folks who appear to be making an entire career out of being permanently offended by anything and everything that does not conform to their specific beliefs. I should add that not everybody who is religious is like that, just some, and so those that are, dropped off a message …

“God frowns upon this manger scene,Jesus has supreme power over death and evil; he is not a zombie.”

… claimed the folks who assert that Jesus rose from the dead.

They really really do not like it, and so are insisting “Away with this manger” on YouTube which you you click, you discover is a long emotion laden rant.

What did Mr Dixon say about it himself?

So on what basis are the authorities going after him for this?

Local planning laws, apparently it is too big and has a roof over it.

Now in one sense I do understand why such edicts happen, because people live in a community. If the guy next door turns his yard into a junk yard and fills it with piles of clutter, or perhaps started erecting huge neon signs, then that has a real measurable impact, namely property prices drop and nobody would want to buy your house if a neighbour was like that. This however is not that, because what we clearly have is a very seasonal temporary display that will vanish sometime after 25th December, and so deploying such ordinances to go after this guy not only feels wholly inappropriate but a tad vindictive.

Potentially the fine he faces could be $500 per day, but since the scale of advertising that this is generating is now planet wide, I do wonder if a fee of $500 per day just might make it worthwhile.

Here is how the Local News Channel handled it …

It is bizarre and also eccentric, and yet is not an attempt to make a statement of either belief or non-belief, but rather is a clever bit of seasonal advertising for his business, so the real test is this – would I personally be OK if this was next door to me? Sure, why not, it is simply just a bit of temporary make-believe fun inspired by a popular bit of fiction.

As for neighbours and christmas displays, well some really do indeed go over the top and others sometimes do strongly object to that. 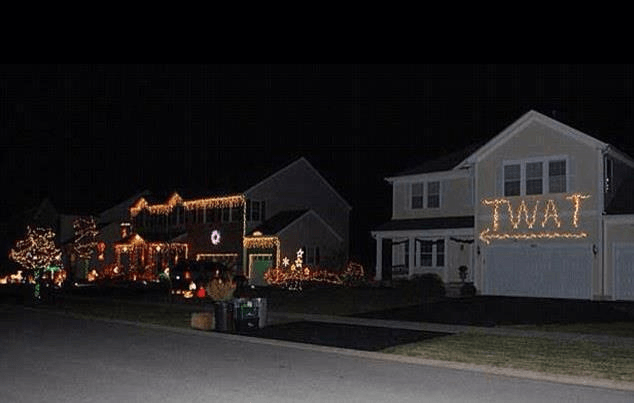