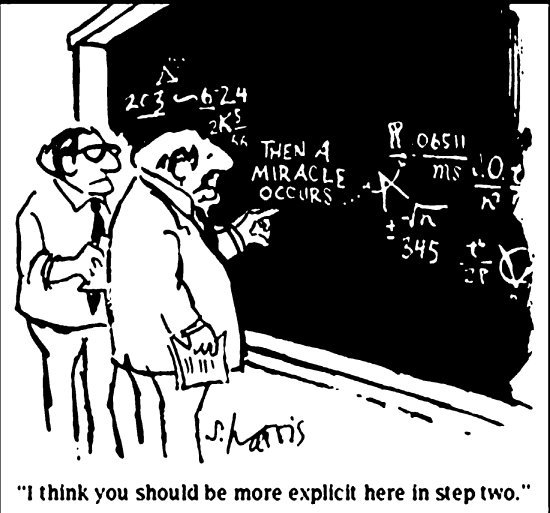 Over at “Lake Country Now” a chap called Al Neuhauser has written an article entitled “The Logical Christian”.

Ah, now that sounds interesting, so I took a peek. Oh, and before we get into it, if you are anticipating intellectually challenging and well-reasoned arguments from Al then I better warn you that you will be disappointed.

OK, so let’s dive in, take a look, and see what we can learn.

First lesson, Al is a truly humble and quite modest chap …

Some of my atheist commenters are particularly incensed because, one, I am quite intelligent–I have the numbers to prove it–and, two, I have a scientific background. Both of these characteristics are considered irreconcilable by the atheist community with belief in God.

“incensed”? well gosh, I think not, highly intelligent humans can, and do, and will no doubt continue to embrace truly daft ideas. The key to understanding this is to appreciate that intelligence and rationality are not the same thing at all.

He moves on to tell us a story about his past, and this is how things played out for him …

I was a sophomore in Engineering School when I was exposed to the Big Bang Theory, an early version. I judged it to be scientifically ridiculous. My thinking gravitated to Evolution and found it to be equally improbable. This created a dilemma. Simply, there are only two options when considering how we and everything else got here: Big Bang/Evolution or Biblical Creation. So, I began to drift back to religion

Actually no, there are not two options, it is not a binary choice between equals, but rather is a choice between being rational or irrational. One path consists of evidence based knowledge, the other is a road paved with cultural mythology, magic, and mysticism.

Unfortunately, much of what today passes for science is theory, much of it almost completely devoid of corroborating evidence. Let’s look at some examples.

…and so what actually comes next is highly predictable. He is an engineer and is neither a biologist nor a cosmologist and so proceeds to demonstrate that he does not really grasp things outside his field of engineering knowledge. He might indeed have a deep understanding of industrial computer-based control systems, but beyond that … er, no.

He proceeds to present a very mixed up view of what is commonly known as the Big bang theory, which is simply a model that describes the early expansion of the universe and is rather robustly backed up by heaps of observational data. He talks about it being an explosion, which it was not, and an expansion in all directions, but “direction” in that context is meaningless, and then proceeds to toss string theory into the mix. He also rather bizzarly claims that the Higgs bosun has not been discovered, which should come as a surprise to the folks at Cern and the entire scientific community.

This is indeed an illustration of the Dunning–Kruger effect, a psychological condition where relatively unskilled individuals think that are truly smart and so they mistakenly rate their ability to far higher than it actually is. Sift through his word soup and it soon becomes rather clear that he does not really grasp modern cosmology at all.

He then moves on to discuss dark matter like this …

There’s more, like “dark energy” and other stuff. The encompassing characteristic of all this is a complete lack of any actual supporting evidence. These are all figments of astrophysical imagination.

… and so he demonstrates that he really does not grasp what is going on here either, and so reverts to suggesting that they are simply making stuff up. Imagination however is the exclusive preserve of religion, because both dark matter and dark energy are simply place holders used to explain real observations. If curious, you can read more about dark matter here, and dark energy here.

Finally, evolution comes into the cross hairs, and this is his primary argument …

The major problem with this, in my opinion, is something called “irreducible complexity.”

… er no, that is not at all a “major problem”, simply google that term (a task that requires all of 10 seconds of effort) and you rapidly discover that it is pseudoscientific BS …

He really is not at all familiar with the conversation and is deploying arguments that have been both factually and also legally debunked over one decade ago.

So, in possesion of a God-given scientific snd skeptical mind, I was and am unable to believe in any of this illogical and phantasmagorical claptrap. I believe it is the product of man’s unbounded egotism [says the guy to has been striving to tell us how smart and intelligent he is] the inability or unwillingness to acknowledge the existence of a superior being [inability due to a complete lack of any evidence at all]

… and so a chap who is indeed highly intelligent, has opted to ditch evidence based science and go with magic as the best answer.

He might indeed be quite confident that this is all very logical, but sadly when it comes to religious thinking, it blinds the mind and binds it in darkness and superstition to such a degree that rationality becomes a truly undiscovered country.

The deployment of engineering skills to handle industrial computer-based control systems is his area, and that comfort zone does not in any way conflict with the deeply emotional religious currents that wash through many human minds. When other not so familiar aspects of knowledge that conflict with the belief gently lap upon the shore of such a mind, then the tidal defence walls soon spring up … or to put that another way, cultural beliefs that have been invested in emotionally generally tend to trump facts and reality, and that is usually true no matter how smart an individual might be.