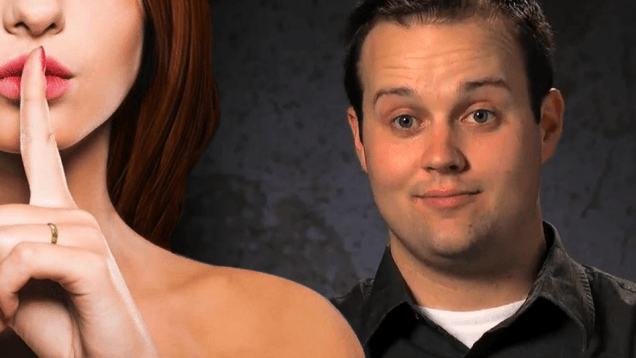 Well how could I possibly let it pass, I’m shocked I tell you, totally shocked and devastated … oh OK, I’m not.

So just in case you missed it, Josh Dugger has been caught with his pants down … quite literally. Gawker has all the juicy details and starts with a good summary …

In 2013, conservative reality TV star Josh Duggar—of TLC’s 19 Kids and Counting fame—was named the executive director of the Family Research Council, a conservative lobbying group in D.C. which seeks “to champion marriage and family as the foundation of civilization, the seedbed of virtue, and the wellspring of society.” During that time, he also maintained a paid account on Ashley Madison, a web site created for the express purpose of cheating on your spouse.

In May 2015, Duggar was forced to resign after In Touch Weekly reported that he had molested five young girls (four of whom were his own sisters) beginning in 2002. When the accusations became public, the family went into crisis mode, insisting that Josh had reformed and that the media covering the claims was intent on “exploiting women.”

The problem is that people can sign up to Ashley Madison and use any name they like without any verification, so it is well within the remit of somebody with an ironically twisted sense of humour to use his name, and so we need to ask ourselves what the evidence is.

Someone using a credit card belonging to a Joshua J. Duggar, with a billing address that matches the home in Fayetteville, Arkansas owned by his grandmother Mary—a home that was consistently shown on their now-cancelled TV show, and in which Anna Duggar gave birth to her first child—paid a total of $986.76 for two different monthly Ashley Madison subscriptions from February of 2013 until May of 2015.

…In July 2014*, he seems to have started a second account that was linked to his home in Oxon Hill, Maryland, where he spent his time lobbying against causes like same-sex marriage. The birthday listed in the data for Duggar’s first account is February 3, 1988, one month off Duggar’s actual birthday of March 3, 1988. The birthday listed for the second account is March 2, 1988.

… and so it would indeed appears to be rather damming.

Latest News – It has been confirmed, he confessed.

Josh Dugger has released a statement and confirmed it all …

I have been the biggest hypocrite ever. While espousing faith and family values, I have secretly over the last several years been viewing pornography on the internet and this became a secret addiction and I became unfaithful to my wife.

Why is this news?

It is tragic that what is essentially a morally bankrupt religious philosophy leads to consequences such as this, for it truly impacts those around him, and yet within his statement he appears to be far more concerned about how his imaginary friend Jesus feels …

I am so ashamed of the double life that I have been living and am grieved for the hurt, pain and disgrace my sin has caused my wife and family, and most of all Jesus and all those who profess faith in Him.

When the foundation of your life is based upon a sexually repressive fictitious religious mythology that simply does not work, you would think that perhaps he might begin to question it all, but alas no, he is striving to conform even more by deploying lots of self-loathing and repression.

When the revelation about him sexually molesting five girls when he was a teen came out, ardent Christian apologists such as Ray Comfort countered with, “Ah but he was not Born Again then, but is is now, so we can sweep that all under the carpet and simply forget about it”. OK, that’s a paraphrase, what well know Christian Apologist Ray Comfort actually said was …

Standing by my friend Josh Duggar, as a brother in Christ. This was in his BC days. Such were some of us.

… and so I do wonder what excuse Ray Comfort will now issue for his “Brother in Christ” this time. I suspect he will do the usual thing and basically toss him under the bus by simply declaring that he was still not really born again, but has now really converted this time.

Oh but wait a second …

There is one other thing here that does disturb me, and so we should not ignore it.

This revelation is with us because somebody hacked into Ashley Madison and stole confidential data. I understand the motives, the business model for Ashley Madison is one that promotes highly unethical behaviour and so I can see somebody using that as justification for stealing, and perhaps potentially destroying and wiping out the entire business as a result, and also throwing a spotlight upon rather a lot of stuff that is quite frankly none of our business, so should we really be giving a free pass to criminal behaviour when it suits our personal beliefs?

So what trumps what here, is a right to privacy something that should or could trump religious hypocrisy or not?

Now that I have you thinking about this and pausing to consider the possibility that hacking is something that should never happen, let me toss something else into the mix to really muddle things up. Snowden clearly broke the law when he also put rather a lot of highly confidential data into the public domain, and yet it can be argued that what he did was to expose rather a lot of highly illegal stuff that the US government wished had remained hidden, and so you can also argue that when it comes to things like this it can be rather tricky to work out what the right balance is between the public good and the law, especially when the law is being used to cloak stuff that is itself highly illegal.

So what am I saying? Well basically this …

So what do you think, am I wrong about that?

(Don’t let your feelings about Josh Duggar muddle your answer, he did what he did and now faces the consequences, the question is specific to the ethics of the data breach itself).