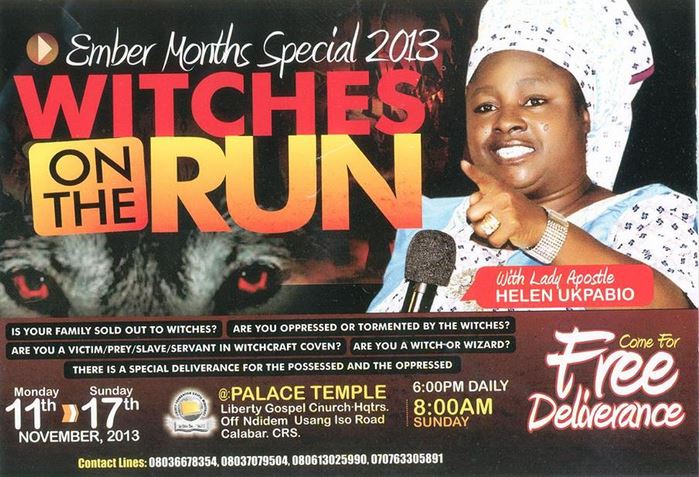 It sounds like a joke, or perhaps satire – A Nigerian Witch Hunter is suing the British Humanist Association for the princely sum of £500 Million.

It this real? Yes it is.

Padraig Reidy explains about all of this at Index on Censorship …

Her specific claim against the BHA is that an article on its website claimed she believed that noisy babies may be possessed by Satan.

The article, which appeared in July 2009, says that Ukpabio wrote in her book, Unveiling The Mysteries Of Witchcraft, that “A child under two years of age that cries at night and deteriorates in health is an agent of Satan”.

In this, the article is mistaken. Ukpabio’s book does not seem to contain this sentence. Rather, under the heading “How To Recognise A Witch”, Ukpabio writes: “Under the age of two, the child screams at night, cries, is always feverish suddenly deteriorates in health, puts up an attitude of fear, and may not feed very well.”

In other words, her supposed claim for £500 million is based upon the observation that she did not claim that a crying 2 year old is an agent of Satan, but rather is a witch, and apparently being a witch (or vampire) is just not as bad as being an agent of Satan. Then again, I thought witches were supposed to be the agents of Satan, so are these supposed witches meant to be agents of some other supernatural entity?

As you ought have worked out by now, this is all utterly absurd, and as Mr Reidy points out …

This is the stuff of a particularly heated thread on a Dungeons and Dragons board. It is not an argument that has a place in a chamber at the Royal Courts of Justice, in spite of that building’s Gormenghastish architecture.

Indeed, but what is even more absurd is that the article in question was published in 2009 … five years ago … and our Witch Hunter has only now decided that she is offended. In other words, there is something else going on here that is bubbling away beneath this brewing cauldron …

Her complaint, in reality, is not about the 2009 article, or the difference between satanic possession and witchcraft. Ukpabio’s underlying complaint is about a campaign to have her banned from the country in April 2014. It is the coverage of her controversial trip to Britain in April that her lawyer claims caused her to suffer reputational injury.

OK I get that, she is not simply a promoter of complete and utter bullshit, but rather is the promoter of rather dangerous bullshit that is sufficiently insane enough to earn her a UK ban, and so she is ticked off about that ban, but why go after the British Humanists, why not directly attack the media for publishing the stories that helped get her banned? (for example the Daily Mail)

I believe that the real motivation here is her attempt to put an axe to the root of her troubles, she is indirectly going after brave individuals such as the Nigerian Leo Igwe. Here is a picture I took of him speaking about the horrendous abuses committed in Nigeria by individuals such as this self-appointed witch hunter Helen Ukpabio … 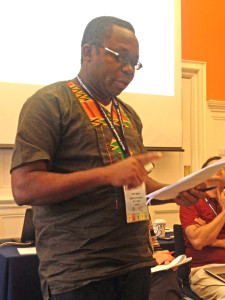 The above was taken at the World Humanist Conference that was hosted in Oxford by the British Humanists in early August this year, just prior to this libel claim. Mr Igwe has specialized in campaigning against and documenting the impacts of child witchcraft accusations in Nigeria. His stance is not new, he has been shouting out about such abuses for some time now. For example, in 2008 a BBC documentary, Saving Africa’s Witch Children, featured an appearance by Mr Igwe, and one of the primary subjects facing criticism in that was “witch hunter Helen Ukpabio.”

So who exactly is Helen Ukpabio?

She is a self-appointed ‘Lady Apostle’, and founder of the controversial African Evangelical franchise Liberty Foundation Gospel Ministries in Cross River State, Nigeria. Yep, she has her very own church that now claims to have 150 branches worldwide and a headquarters in Calabar in Southern Nigeria. What makes it rather disturbing is that the Liberty Gospel Church has grown to be a witch hunting church, and so her ‘mission’ is to deliver people from witchcraft attack and organise deliverance sessions where she identifies and exorcises people, mainly children, of witchcraft.

She also promotes a rather literal reading of the bible, but apparently with the exception of the bits that direct women to be silent and never to hold any position of authority in the church over a man – for some odd reason those bits are quite happily ignored.

In essence, this is a scam in which she taps into fear via religion and as a result has become rather wealthy.

So why the Libel?

By going after the British Humanists, she in attempting to shutdown the support that Mr Igwe has and completely isolate him. Mr Reidy nails it like this …

What scant support Nigerian activists receive comes from the international atheist and humanist community. While I would not cast doubt on western humanists’ solidarity with their Nigerian comrades, a costly court case would make anyone think twice before getting involved in faraway struggles again.

What Helen Ukpabio does not appreciate is that this will not work, she truly does not understand that the British Humanists and others will not be gagged like this, but will instead be motivated even more to stand with Mr Igwe and all others who openly take a brave stance against dangerous superstitious nonsense. What her daft libel lawsuit will do is to not only publicise just how crazy and insane her beliefs are, but also highlight even further how truly dangerous they are. Think of it this way, if she had not launched the libel case, you would not be reading this blog posting or any of the other stories in the media, and would most probably never have heard about her.

This court case is the latest in a long line of unsuccessful legal actions that Helen Ukpabio has pursued against me and other human rights activists. Previous cases were thrown out of court in Nigeria but this time she is looking to take action in a UK court. I have no doubt that a judge in the UK will reach the same conclusion as those in Nigeria. Of course, the real question here is whether our Government should allow hate preachers such as Helen Ukpabio to enter the UK. Since her teachings have been scrutinised by the UN and various other bodies it would appear that this may not be in the public interest. This case also therefore provides the Home Secretary and the National Working Group to Tackle Child Abuse linked to Faith and Belief with a great opportunity to condemn the practices of such pastors, take concrete action and ensure that justice is served.