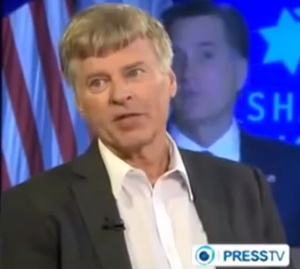 Oh wait, things are not quite as advertised (but you already knew that, right?).

So the story here is that an anonymous poster has posted a YouTube clip that asserts this rather strange claim, and it consists of an interview of US Presidential Candidate Merlin Miller by PressTV.

Now you might be thinking “Who?” and also “Interviewed by Who?”.

OK, so here are the players in the game.

PressTV is the news organization of the Islamic Republic of Iran Broadcasting (IRIB) [Yes really], so clearly these folks are not exactly your go-to guys for reliable unbiased coverage of anything at all. In fact, their stated goal is to counter “Western propaganda” from sites such as CNN or the BBC. How can I put this politely, well let’s just say that Press TV has been the subject of several controversies, so you can more or less dismiss anything they put out.

OK, now who the heck is US Presidential Candidate Merlin Miller?

If you have never heard of him, then do not beat yourself up for being out of the loop, because there is a reason for that lack of knowledge. He founded his 3rd way party in 2010, then stood for election as a US Presidential Candidate in 2012 and managed to pull in a staggering number of votes – 2,713 to be precise (yes really), or to translate that, of the 129,235,558 who voted, 129, 232,845 decided (quite rightly) “nope”. In other words, he represents 0.0%, but then that is no great surprise given his views that the US is “Zionist-controlled”, so yes what we have here is a Grade-1 gold-plated nut.

Now on to the “evidence” for his 9/11 claim. If you watch the actual clip, it is basically him saying, “well in my opinion …. ” bla bla bla, and that’s it, he simply asserts the daft claim and offers exactly zero evidence for this assertion. You do trust this “opinion” and the lack of any evidence is not going to bother you … right?

OK, so why am I writing about this?

It’s truly hilarious of course, and not just because of the original claim and who made it, but also for the fact that this YouTube clip is being cited several years later as “evidence” provided by a “US Presidential Candidate”. Ah, but why is it like this, why would somebody buy into the very idea and promote this “evidence”?

The chap posting it is a Muslim of course, so once you know that, then you no doubt have an immediate lightbulb moment. Clearly as a Muslim he has rather a lot of difficulty coming to terms with events such as 9/11; to cope and retain the belief intact, his mind will potentially rationalise such events in several ways.  The two most common variations will be as follows:-

So why dismiss the actual evidence so easily?

Belief itself may be just an idea, but those that embrace such ideas have not done so at an intellectual level, but rather they have invested rather a lot of time and a great deal of themselves at a very deep emotional level. When faced with clear evidence that the consequences of such beliefs manifest some truly abhorrent stuff, the high degree of emotional investment completely trumps such a reality and so these rationalisations will quite naturally emerge to enable the belief to be retained.

One other observation, the chap posting the clip is a Sunni Muslim, and Press TV from Iran will generally promote a Shia perspective, one that would view any Sunni as a heretic … but all that gets kicked to the curb when Press TV has stuff that helps to retain the belief intact when confronted by the rather dire reality.

Letting go can be challenging, it took me rather a long time. It should not be surprising that it is like this, in fact I do recall thinking to myself similar “They are not true …” thoughts at times, it is all part of how the mind protects an investment that has already been made.

Like many, my experience was one that felt rather akin to a deep sea diver slowly rising to the surface de-pressurising … until one day I broke surface and came to the realisation that I had finally let go. Looking back I now can see that I embraced rather a lot of irrational stuff and so it is now rather embarrassing that I truly believed … and yet if I managed to escape then there is hope for others as well.

20 thoughts on “US Presidential Candidate says, “Israel Did 911” Zionists Control US Politics.”