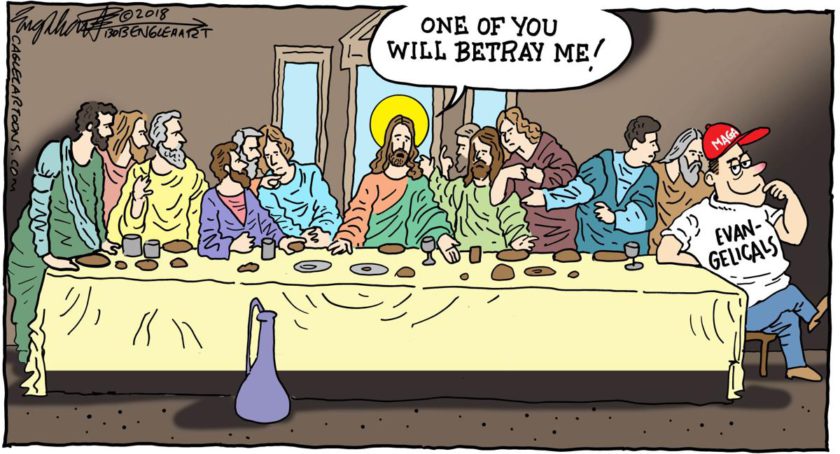 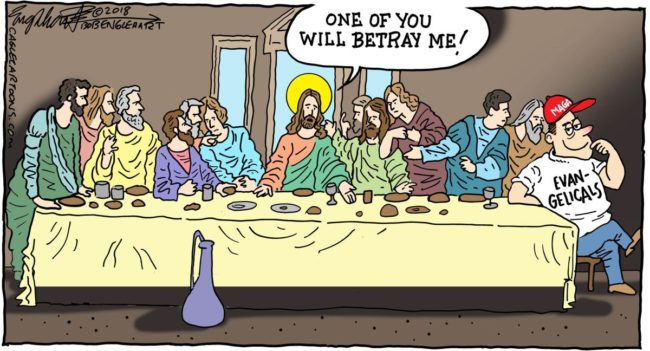 The basis for this posting is the result of a poll conducted by a Christian group named “Ligonier Ministries“, and no, I’ve never heard of them either. Their poll was conducted in 2018 and the details were published about one month ago …

Ligonier Ministries teamed up with LifeWay Research, the research arm of the Southern Baptist Convention, … We surveyed 3,000 Americans on questions regarding beliefs about God, sin, salvation, heaven and hell, the church, and the Bible.

So the point of interest here is that what they have discovered is that many who identified as evangelicals do not actually believe what you might assume they believe.

“Everyone sins a little, but most people are good by nature”.

That sounds like a perfectly reasonable and rational stance. So when presented with this here is how the Evangelicals responded …

More than half of them (right-hand side) agreed.

This is astonishing because a core evangelical belief is that we are all evil wicked sinners without Jesus, yet it turns out that the bulk of them don’t actually believe that but instead opt to be reasonable human beings and consider others to be the same.

For the Christian Group conducting the survey that was a distressing discovery, but for the rest of us it is rather encouraging because it means that “they” are not as bat-shit crazy as you might assume them to be.

“God accepts the worship of all religions, including Christianity, Judaism, and Islam.”

Rather obviously my own personal stance is that there is no God, but let’s park that line of thinking for now and see how the Evangelicals rolled with this statement …

Yet again on the right-hand side we find a majority agree, and yet again that conflicts with classical Christian belief. Supposedly Jesus is the only way of salvation, yet a majority of evangelicals don’t actually agree with that. They happily embrace other variations of belief as equally viable.

Answers to some of the questions did align with expectations. The majority of evangelicals agree with all of these statements …

“There is one true God in three persons: God the Father, God the Son, and God the Holy Spirit.”

So yes, while these are all claims that don’t have any credible evidence, they are traditional beliefs, hence evangelical adherence to them is not surprising.

“Jesus is the first and greatest being created by God.”

What the heck happened to the “Jesus is God” belief?

The Point is this

Often convenient identity labels are deployed. People will explain that they are … Catholic, Baptist, Evangelical, etc … This is supposedly a shortcut that explains all you need to know, and is also a common way to embrace a specific religious identity.

In reality it is just not that simple. As is revealed by the answers to this survey, what is often assumed might not be true at all.

Example. Somebody says they are Catholic. You might then ask if they truly believe that the bread and wine turn into the actual body and blood of Jesus during Mass, and they would possibly reply with “well … not literally”, and so you begin to unpack the term and discover that often it does not mean what it is commonly expected to mean.

You  might assume that such terms are a package deal and those that use them are making a binary all or nothing assertion. Apparently not.

People are complicated. Identity labels are of course useful shortcuts, but simmering under the surface is a degree of complexity and diversity that is often not appreciated.

It turns out that the majority of evangelicals don’t really adhere to some of the core Christian beliefs at all. The points of contention are neither minor, fringe, nor vague, but are primary and foundational.

“The evangelical world is in great danger of slipping into irrelevance when it casually forgets the Bible’s doctrine,”

Given the vigorous and unremitting support by the vast majority of evangelicals for the grossly dishonest pussy-grabbing narcissist currently residing in the oval office, and the degree of real damage and harm this alone has inflicted upon many, then I have to admit that the idea that they will be lapsing into irrelevance is quite an encouraging thought.