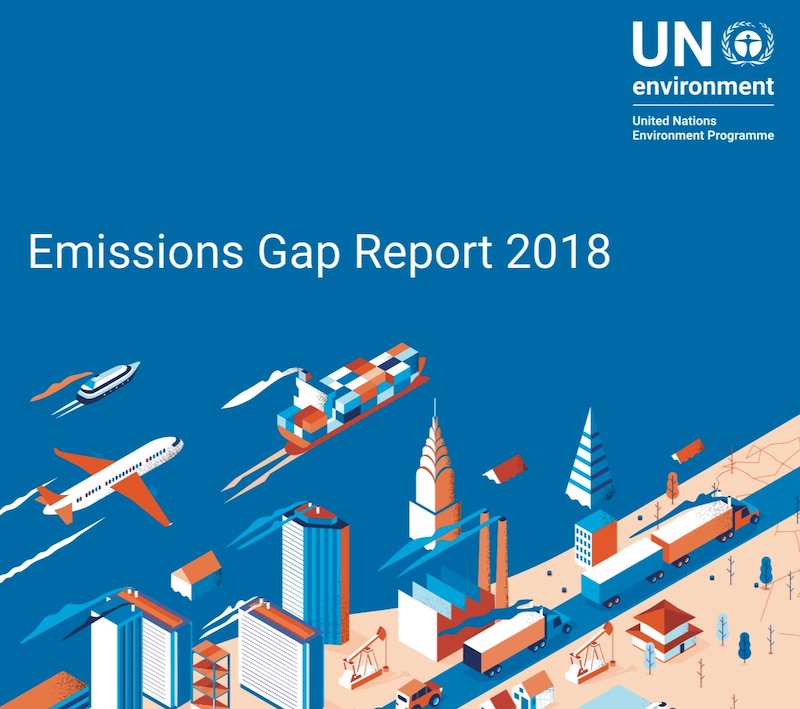 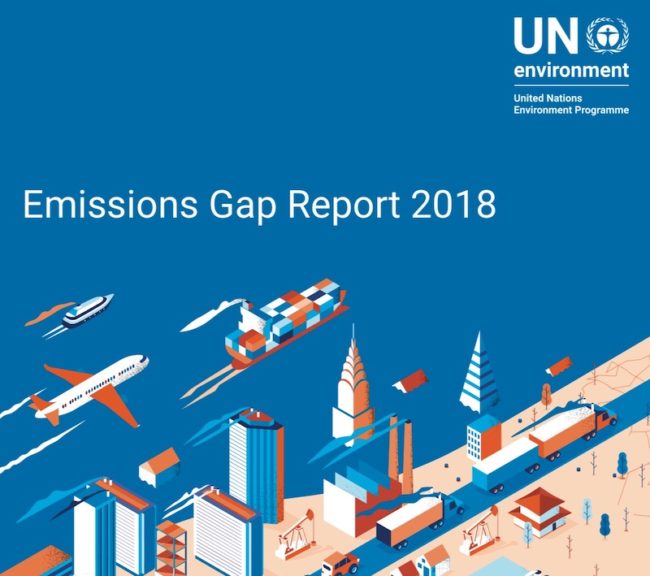 Next Sunday on 2nd December 2018 the next UN Climate Change conference starts. It runs from 2-14 Dec in Katowice, Poland. This is the international body that pulled together what is commonly referred to as the Paris Agreement, and so this conference is all part of that roadmap. As input for this conference, the UN 2018 Emissions gap report has been published this week as a measure of how things are going with the commitments made by the various nations as part of the now legally binding Paris Agreement.

Published this week on 27th November 2018, you can download it from here.

Yes it sounds yawn inducing (for some), but this cuts to the very heart of the most dire threat our species has ever faced – Climate Change – by answering the question of the moment; Are we taking the necessary and sufficient steps to avert the catastrophic consequences we now face?

The quick short answer; No, we are not, and so this updated report is a carbon copy of what we learned from last year’s report, and also from the report of the year before that.

The window of opportunity to take meaningful action remains open, but it is dwindling.

Various carbon reduction commitments exist, and if every single nation adhered to those and met them, it is still not enough; we need to sign up to even more.

We are already starting to experience change; Caribbean superstorms, droughts in the Horn of Africa, record temperatures and wildfires. Yet all that is just a beginning and so evidence-based reports like this will help to focus the minds of those attending the conference.

The 7 Key Points from the Report

1. Current commitments expressed in the NDCs are inadequate to bridge the emissions gap in 2030. Technically, it is still possible to bridge the gap to ensure global warming stays well below 2°C and 1.5°C, but if NDC ambitions are not increased before 2030, exceeding the 1.5°C goal can no longer be avoided. Now more than ever, unprecedented and urgent action is required by all nations. The assessment of actions by the G20 countries indicates that this is yet to happen; in fact, global CO2 emissions increased in 2017 after three years of stagnation.

2. Global greenhouse gas emissions show no signs of peaking. Global CO2 emissions from energy and industry increased in 2017, following a three-year period of stabilization. Total annual greenhouse gases emissions, including from land-use change, reached a record high of 53.5 GtCO2e in 2017, an increase of 0.7 GtCO2e compared with 2016. In contrast, global GHG emissions in 2030 need to be approximately 25 percent and 55 percent lower than in 2017 to put the world on a least-cost pathway to limiting global warming to 2°C and 1.5°C respectively.

3. The gap in 2030 between emission levels under full implementation of conditional NDCs and those consistent with least-cost pathways to the 2°C target is 13 GtCO2e. If only the unconditional NDCs are implemented, the gap increases to 15 GtCO2e. The gap in the case of the 1.5°C target is 29 GtCO2e and 32 GtCO2e respectively. This gap has increased compared with 2017 as a result of the expanded and more diverse literature on 1.5°C and 2°C pathways prepared for the IPCC Special Report.

4. Countries need to strengthen the ambition of NDCs and scale up and increase effectiveness of domestic policy to achieve the temperature goals of the Paris Agreement. To bridge the 2030 emissions gap and ensure long-term decarbonization consistent with the Paris Agreement goals, countries must enhance their mitigation ambition. Enhanced ambition in the NDCs sends an important signal regarding mitigation commitment, both internationally and domestically. However, domestic policies are crucial to translate mitigation ambition into action.

6. Fiscal policy reform can play a key role in creating strong incentives for low-carbon investments and reducing GHG emissions. Revenues from carbon pricing can be used for reducing other taxes, increase spending on social issues or compensating low-income households. Well-designed fiscal reform packages can reduce the costs of mitigating emissions, thereby making these fiscal reforms more socially acceptable. The use of carbon pricing to reduce GHG emissions is still only emerging in many countries and generally not applied at a sufficient level to facilitate a real shift towards low-carbon societies.

7. Accelerating innovation is a key component of any attempt to bridge the emissions gap, but it will not happen by itself. Combining innovation in the use of existing technologies and in behaviour with the promotion of investment in new technologies and market creation has the potential to radically transform societies and reduce their GHG emissions.

The Good, The Bad, and the Ugly

Overview of the status and progress of G20 members, including on Cancun pledges and NDC targets.

That’s very much down to the delegates at the conference next week.

What this report does is to open a window into how it has been going so far. That then enables meaningful decisive evidence-based decisions to be taken.

Meanwhile, in the US talking GOP heads paid for by the oil, coal, and gas industry pop up in the TV news cycle to declare it is all BS, and no credible climate scientists get interviewed (insert facepalm here)

Wonky but important climate news: The 'emissions gap' — the gulf between what countries are promising to do to curb emissions, and what's actually needed to avoid dangerous warming — has actually gotten *bigger* in the latest @UNEnvironment report. https://t.co/ArfrZ48YLJ pic.twitter.com/fID49BGyeR

Global CO2 emissions increased in 2017, after a three-year decline. Countries must move faster and with much greater urgency to limit global warming to 1.5°C, according to the new @UNEnvironment report. https://t.co/tqpQY0u7GD #ClimateAction

The big conclusion: countries have to triple their efforts to keep warming under 2°C.https://t.co/Y1rrW1HjQX

Global emissions are on the rise again & climate pledges made to date aren't enough to close the #EmissionsGap, says @UNEnvironment > https://t.co/t9yHplcopb At #COP24, nations are set to finalize the implementation guidelines of the #ParisAgreement, crucial to reach the targets pic.twitter.com/uhtarQK9Dk