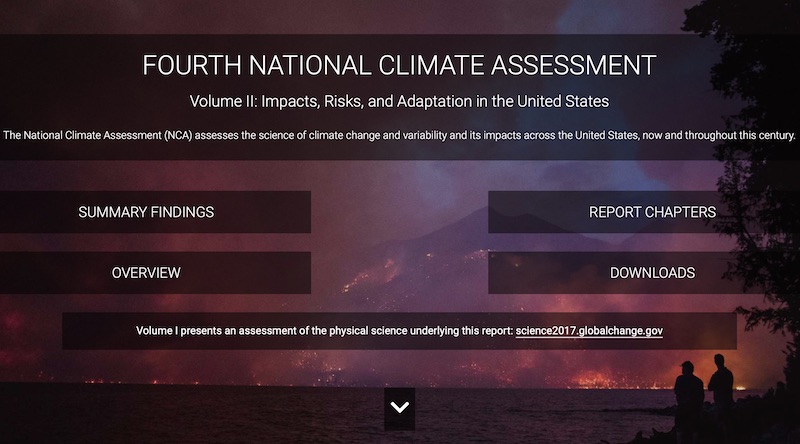 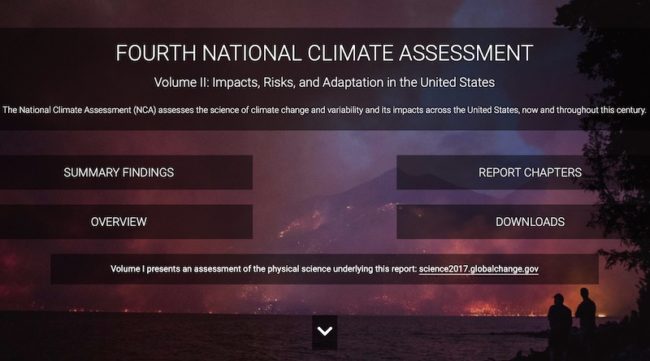 There has been much media reporting regarding the issuing of the Fourth National Climate Assessment in the US, and also inevitably some utterly stupid responses to it from the usual suspects. For example Rick Santorum popped up on CNN to praise the Trump administration’s attempt to try and bury the report with this claim: “A lot of these scientists are driven by the money“.

Er no, that’s utter BS, his evidence for this claim is exactly zero …

How much money do I make for studying climate? $0. Work on #NCA4 was out of hide. Same for many authors. Climatologists are no more driven by $$ than meteorologists. Do you really think meteorologists issue tornado warnings for the $$? Of course not. Same level of ridiculous. https://t.co/6Cu0Bioc1p

Apparently @RickSantorum thinks we climate scientists who were paid ZERO DOLLARS to write the #NationalClimateAssessment are "driven by money". Rick needs to watch this Global Weirding episode. https://t.co/Z4aPpxingC

… but hey, this is Rick Santorum, so spouting ignorance is his speciality. OK, let’s move on. (I’ll come back to this at the end of this posting).

Where can I find the report?

It is freely available via this link

Why has this report been created?

It we created by a team of 32 Lead Authors, including scientists from Federal agencies, academia, and the private sector. These authors were nominated through a public process and selected for their expertise. Contributing authors were invited to provide input on specific topics, as needed.

Overall a total of 300 government and independent scientists contributed, and as I’ve already highlighted, they don’t get paid to do this.

Is this just an opinion expressed by these people?

Nope, that’s not how it works.

The entire report has been rigorously peer-reviewed. The authors can’t simply express wild crazy ideas, they need to backup what they write with hard solid verifiable evidence.  It all leans very heavily upon the peer-reviewed scientific literature.

It has taken over 3 years to create this report as it passed through a very rigorous six-step review process.

In Summary – What does it tell us?

There are no surprises here, it is all information that will be familiar already.

This however is where it becomes a bit tricky. The summary itself runs to over 12 sections, hence the best I can do is to strive to create a summary of the summary. At best you are getting a 50,000ft view.

Climate change creates new risks and exacerbates existing vulnerabilities in communities across the United States, presenting growing challenges to human health and safety, quality of life, and the rate of economic growth.

The impacts of climate change are already being felt in communities across the country. More frequent and intense extreme weather and climate-related events, as well as changes in average climate conditions, are expected to continue to damage infrastructure, ecosystems, and social systems that provide essential benefits to communities.

Future climate change is expected to further disrupt many areas of life, exacerbating existing challenges to prosperity posed by aging and deteriorating infrastructure, stressed ecosystems, and economic inequality. Impacts within and across regions will not be distributed equally. People who are already vulnerable, including lower-income and other marginalized communities, have lower capacity to prepare for and cope with extreme weather and climate-related events and are expected to experience greater impacts. Prioritizing adaptation actions for the most vulnerable populations would contribute to a more equitable future within and across communities.

Global action to significantly cut greenhouse gas emissions can substantially reduce climate-related risks and increase opportunities for these populations in the longer term.

Without substantial and sustained global mitigation and regional adaptation efforts, climate change is expected to cause growing losses to American infrastructure and property and impede the rate of economic growth over this century.

In the absence of significant global mitigation action and regional adaptation efforts, rising temperatures, sea level rise, and changes in extreme events are expected to increasingly disrupt and damage critical infrastructure and property, labor productivity, and the vitality of our communities.

With continued growth in emissions at historic rates, annual losses in some economic sectors are projected to reach hundreds of billions of dollars by the end of the century—more than the current gross domestic product (GDP) of many U.S. states.

Climate change affects the natural, built, and social systems we rely on individually and through their connections to one another. These interconnected systems are increasingly vulnerable to cascading impacts that are often difficult to predict, threatening essential services within and beyond the Nation’s borders.

Communities, governments, and businesses are working to reduce risks from and costs associated with climate change by taking action to lower greenhouse gas emissions and implement adaptation strategies. While mitigation and adaptation efforts have expanded substantially in the last four years, they do not yet approach the scale considered necessary to avoid substantial damages to the economy, environment, and human health over the coming decades.

The quality and quantity of water available for use by people and ecosystems across the country are being affected by climate change, increasing risks and costs to agriculture, energy production, industry, recreation, and the environment.

Impacts from climate change on extreme weather and climate-related events, air quality, and the transmission of disease through insects and pests, food, and water increasingly threaten the health and well-being of the American people, particularly populations that are already vulnerable.

Ecosystems and the benefits they provide to society are being altered by climate change, and these impacts are projected to continue. Without substantial and sustained reductions in global greenhouse gas emissions, transformative impacts on some ecosystems will occur; some coral reef and sea ice ecosystems are already experiencing such transformational changes.

Our Nation’s aging and deteriorating infrastructure is further stressed by increases in heavy precipitation events, coastal flooding, heat, wildfires, and other extreme events, as well as changes to average precipitation and temperature. Without adaptation, climate change will continue to degrade infrastructure performance over the rest of the century, with the potential for cascading impacts that threaten our economy, national security, essential services, and health and well-being.

Coastal communities and the ecosystems that support them are increasingly threatened by the impacts of climate change. Without significant reductions in global greenhouse gas emissions and regional adaptation measures, many coastal regions will be transformed by the latter part of this century, with impacts affecting other regions and sectors. Even in a future with lower greenhouse gas emissions, many communities are expected to suffer financial impacts as chronic high-tide flooding leads to higher costs and lower property values.

Rising water temperatures, ocean acidification, retreating arctic sea ice, sea level rise, high-tide flooding, coastal erosion, higher storm surge, and heavier precipitation events threaten our oceans and coasts. These effects are projected to continue, putting ocean and marine species at risk, decreasing the productivity of certain fisheries, and threatening communities that rely on marine ecosystems for livelihoods and recreation, with particular impacts on fishing communities in Hawai‘i and the U.S.-Affiliated Pacific Islands, the U.S. Caribbean, and the Gulf of Mexico. Lasting damage to coastal property and infrastructure driven by sea level rise and storm surge is expected to lead to financial losses for individuals, businesses, and communities, with the Atlantic and Gulf Coasts facing above-average risks.

Outdoor recreation, tourist economies, and quality of life are reliant on benefits provided by our natural environment that will be degraded by the impacts of climate change in many ways

A Summary of that Summary

Earth’s climate is now changing faster than at any point in the history of modern civilization, primarily as a result of human activities. The impacts of global climate change are already being felt in the United States and are projected to intensify in the future—but the severity of future impacts will depend largely on actions taken to reduce greenhouse gas emissions and to adapt to the changes that will occur.

Climate-related risks will continue to grow without additional action. Decisions made today determine risk exposure for current and future generations and will either broaden or limit options to reduce the negative consequences of climate change. While Americans are responding in ways that can bolster resilience and improve livelihoods, neither global efforts to mitigate the causes of climate change nor regional efforts to adapt to the impacts currently approach the scales needed to avoid substantial damages to the U.S. economy, environment, and human health and well-being over the coming decades.

The report itself is very accessible and readable.

They have a FAQ section.

Since Rick Santorum is rather eager for us to follow the money, then let’s do exactly that.

Oh look, guess who is being paid by the Coal industry …

Rick Santorum is co-chair of an advocacy group for biofuels, which emit even more greenhouse gases than conventional petroleum fuels. https://t.co/TmlCP6vFoN Probably I missed the moment in the broadcast when this was disclosed. And perhaps he is working pro bono https://t.co/4WpLCs2OLf

CNN should note that Rick Santorum takes in $100,000s a year as a consultant for consol energy, a coal company https://t.co/qvq6JGSb3j https://t.co/jvtpuYfaDh

… in other words, the guy claiming that Climate Scientists are making up BS just to earn $$ is quite literally being paid to make up BS about climate science by the Coal industry. The real question here is to wonder why CNN did not challenge him to his face.