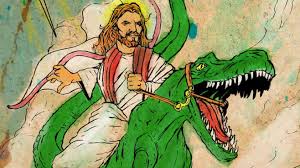 Ken Ham is … well, if you know who he actually is then the very invocation of his name will inspire many, both believers and also non-believers, to roll their eyes. If you do not know who he is then here is a quick summary –

So anyway, Ken is on full throttle these days and has recently come out with a series of rather weird claims, and so purely for your entertainment, here are my two favourites from just this week alone (and it is still only Wednesday) …

July 12 Claim: There are no atheists

Yes, apparently atheists do not exist and are a complete myth (says the guy who has made an entire career out of promoting absurd myths). So why would he assert this? Well basically his “logic” is as follows …

God’s Word clearly states that He has put the knowledge of God within each of us. We all know there is a God. There are no atheists! Also, the Bible asserts it is obvious from what we see around us that God created. The universe and life did not arise by natural processes as atheists believe and assert.

To sum that up, basically he is claiming “I have no clue about anything, so obviously a god did it all by magic“. There are of course things we do know and have evidence for, and there are also things we do not know, and so when faced with things we do not know, the correct default position is (insert drum roll here) “I don’t know”. His alternative of, “Well I have a book of ancient myths, and so that is my default” just does not cut it with most humans, be they religious or non-religious. Now what is interesting is that he does not just go with a god of the gaps argument and slots in god as the answer for the things we do not know, but he is also essentially claiming that his beliefs trump all our scientific knowledge.

July 13 Claim: 9/11 was a warning sign from god because of gay rights

This one is a clip of Ken explaining that 9/11 was a judgement delivered from God, and if you follow the link above then you will find that clip of him explaining this.

So how exactly does this work then, is he really claiming the Islamist extremists are acting on behalf of his specific Christian god concept to deliver judgement?

On the one hand he would reject any and all Islamic claims and happily declare them to be the work of Satan, and yet at the same time he is also now claiming these these same Islamists are in fact doing the work of god, so can you make any sense of this muddled thinking, because I sure can’t.

So there you go then, just a few days worth of dispatches direct from Narnia via Ken Ham, and all of it can only leave you pondering over the question of what comes next. You might of course be tempted to think that perhaps he will soon be promoting the idea that unicorns and fire-breathing dragons are quite real, but no, he has already done all that. Seriously, he really has, because according to Answers in Genesis, Fire-breathing dragon are quite real, and so also are Unicorns.

So are you now ready to roll your eyes with the rest of us as an almost pavlovian response to the name “Ken Ham”?