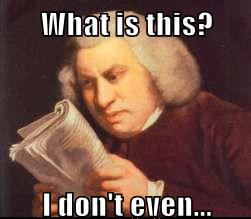 A few days ago, I was presented with a blog posting on a site called Creation Science Study that listed a collection of rather extreme religious views regarding science. It masqueraded as a list of questions that Atheists would supposedly find impossible to answer and was of course stuff that pushed a lot of my hot buttons, for example …

1. If creationists can’t do science, then why do Kent Hovind and Duane T. Gish, who are creation scientists, have professional degrees in science?

2. If dinosaurs turned into birds, why are we not afraid of them?

3. If homosexuality is right, then how come two people of the same sex not produce a child?

4. What purpose do we have if evolution is real?

5. You say Jesus never existed, but have you heard of the Shroud of Turin?

It was such silly stuff, how could I possibly resist, so I took it seriously and blogged answers to all 48 questions listed.

Alas, it is not actually real at all, but rather looks to be a long running attempt at satire, and is what is known as a Poe.

Without a clear indication of the author’s intent, it is difficult or impossible to tell the difference between an expression of sincere extremism and a parody of extremism

And sure enough, when discussed, nobody can really work out if the CreationScience site is satire or sadly real (for an example, see the comments thread after this post)

With some doubt, I proceeded to dig and came across a positing on their site that promoted Landover baptist church as a true church. That however is a well-known satire site and that therefore nailed it.

Since I highlighted that specific post on their blog, now I notice that the page in question has been removed, and so whoever is behind the satire and purged that page to remove the evidence.

So nice try guys, but the game is up, you have been rumbled … and your fingerprints are still there, you still are leaving clues in the comments …

6 thoughts on “I was successfully Poe’d by CreationScienceStudy – It’s a satire site.”