I’m attempting to write a few notes on the JREF Million dollar paranormal challenge as it actually happens here at #TAM2014, and so right now I’m sitting here on the front row waiting for things to start. Every year at TAM (The Amazing Meeting) a live million dollar paranormal challenge is conducted and anybody who is interested can come along to observe.

First – A bit of background

If you already know what the $1 Million challenge is, then just skip this bit … (and so with a bit of cheating – cut and paste from the JREF page here) …

At JREF, we offer a one-million-dollar prize to anyone who can show, under proper observing conditions, evidence of any paranormal, supernatural, or occult power or event. The JREF does not involve itself in the testing procedure, other than helping to design the protocol and approving the conditions under which a test will take place. All tests are designed with the participation and approval of the applicant. In most cases, the applicant will be asked to perform a relatively simple preliminary test of the claim, which if successful, will be followed by the formal test. Preliminary tests are usually conducted by associates of the JREF at the site where the applicant lives. Upon success in the preliminary testing process, the “applicant” becomes a “claimant.”

To date, no one has passed the preliminary tests.

Click here to see the current $1 million statement which shows the current amount in our prize account.

Now for an Actual Live Challenge

19:44 – The lights go dim Banachek and Jamy Ian Swiss are on stage – we are getting a bit of preliminary chat.

Krystyn Lambert is now on stage now and is giving us the details on a Mr Fay Wong, age 34, who can use his hands to heal. This is his first official test.

Chip Denman, the JREF statical guy is on the platform explaining the protocol.

The constraints imposed are believed to be fair.

Richard Saunders is no also on stage.

The guys are explaining that we have a claimant, a subject and are walking us through what is going to happen. Apparently a lot of what will be happening will be concealed from us. We will see some of it and hear things, but there are certain key parts we will not see. 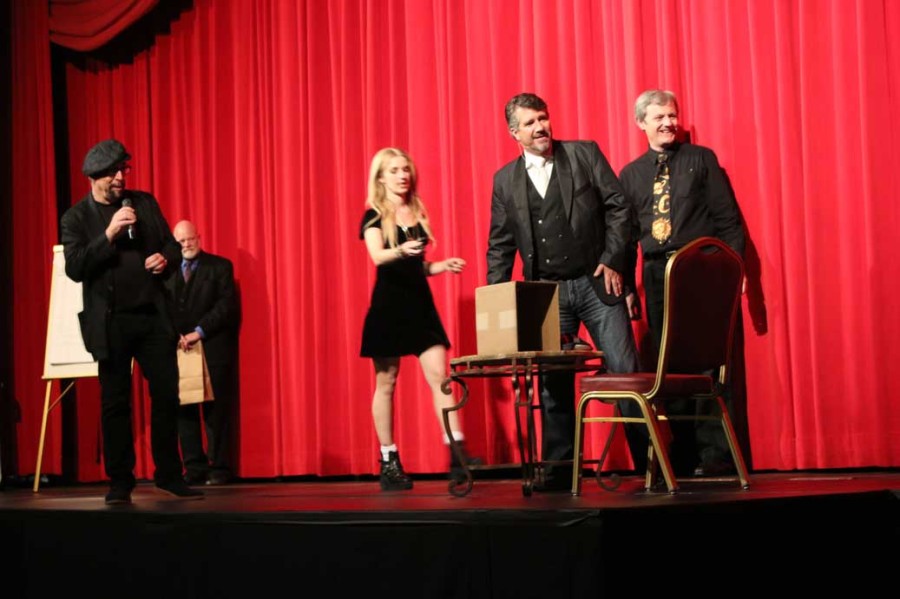 Chip has a bag with two balls … one black and one white. The black ball represents Jamy Ian Swiss and the white ball  represents Mr Wong. The subject has his hand in a box (apparently this energy flow works through a box) and is also now being blind folded and also ear muffler.

We are doing a dry run.

First session is running … as a control … Jamy Ian Swiss is holding his hands over the box.

Second session is running … its Mr Wong … now holding his hands over the box.

Banachek will then ask subject if he felt anything for first … and then second session. If it’s a “Yes” for a session that involved Mr Wong, then it will be marked as a hit. … and as previously outlined, he needs to get 8 out of 9 right.

Banachek is now reading the official agreement that describes the claim and Mr Wong will sign it to consent that he agrees.

Jamy Ian Swiss is not talking us through the formal testing setup. What is hidden is that nobody knows who is going first and who is going second for each of the sessions (in essence it is being doubled blinded and so we the audience must not know who is being tested). 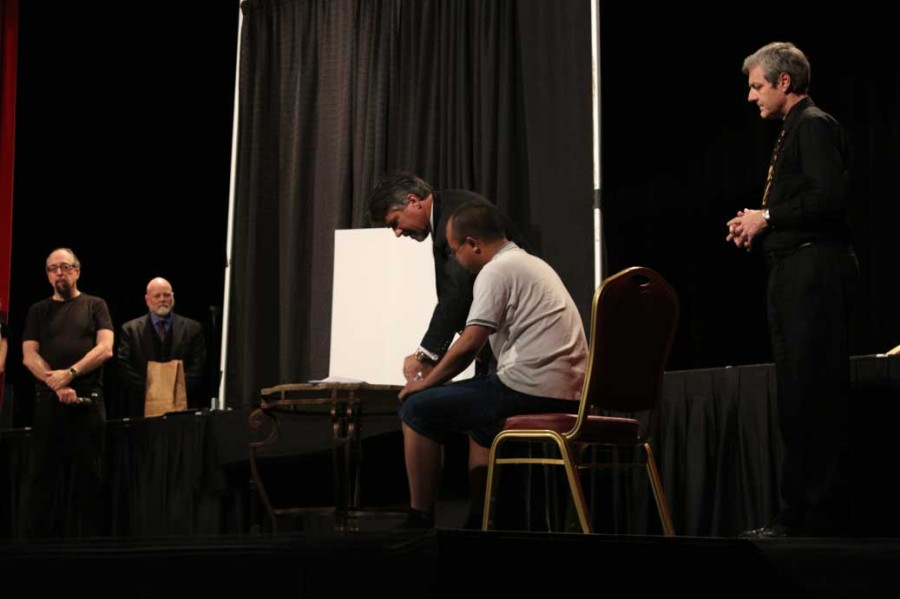 Richard is bringing the first subject out and is placing their hand inside the box, blindfold and ear muffs are in place. Meanwhile Mr Wong is getting his power ready.

Mr Wong indicates that he is ready.

The curtains are closed.

Richard is bringing the second subject out and is placing their hand inside the box, blindfold and ear muffs are in place again.

The curtains are closed.

Testing has been suspended

There was to have been a total of 9 trials and he needed to get 8 out of 9 right so we are finished.

Mr Wong is asked if he will take questions from the audience, he agrees. 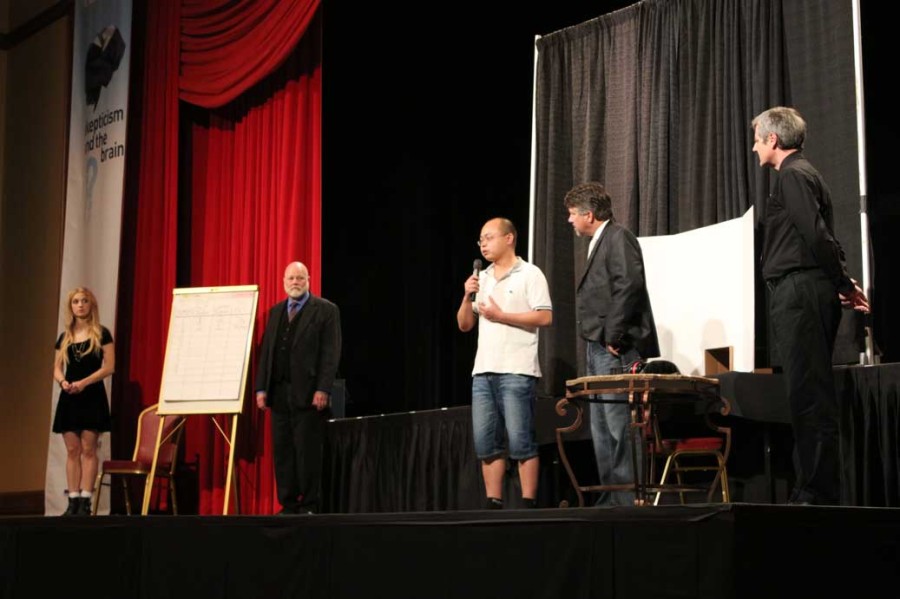 No more questions and so that’s a wrap.

Jamy is thanking us from attending.