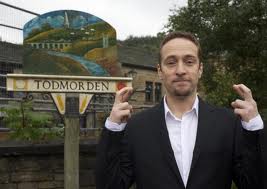 Derren Brown, the UK-based illusionist, mentalist, painter, writer and skeptic has just finished a TV series called “The Experiments”. The last episode, “the secret of luck” was last night, so it is that I am now blogging about, but first, a bit of background.

Derren is well-known for some truly amazing illusions and feats of mentalism. These all appear to be the result of psychic or paranormal practices, but he claims no such abilities and frequently denounces those who do. He could do a stage show as a psychic or evangelical healer and totally convince you that what he was doing was real … he really is that good … but is honest enough to explain that he achieves his results using a combination of “suggestion, psychology, misdirection and showmanship”.

OK, on to what we saw last night.

In the programme, Derren’s target for the experiment in luck is an entire town. Having picked it, he starts the ball rolling by sending Dawn Porter off to go about the town doing a “Documentary” in which she interviews folks about their local lucky dog statue. It’s a setup of course, they placed the statue in the local park, and then use this documentary as a ruse to plant the idea that if you go pat the head of the dog it brings you good luck. This being a community where everybody knows everybody, it works and the idea quickly takes root and soon kicks in. As things proceed over the weeks, a real belief in this lucky dog quickly escalates. The local media also gets in on the act and reports about it, so that helps.

Over time Dawn returns to continue with her documentary interviewing folks who have had luck after patting the lucky dog. Derren’s team also identify folks who feel lucky and folks who do not. One specific individual, Wayne, is convinced that he has no luck, so Derren sets a few things up to test the hypothesis he is putting forward … basically, that “luck” has nothing to do with the supernatural or fate, but is more about what is going on inside our heads … those who are lucky are simply folks who have seen an opportunity and grasped it, but those who are unlucky are folks blind to such opportunities.

They illustrate this quite well with ‘unlucky’ Wayne. A fake scratch card is planted in Wayne’s mail, if he scratches it, he gets to win a TV (for real), but he tossed it in the bin. They set up a fake interviewer in the street giving away £20 to anybody who can answer six questions (these are all questions that relate to what Wayne does). A few folks answer correctly and win the £20, but when Wayne wanders by, he explains that he is busy and does not stop to find out what it is all about. Derren even places £50 on the footpath, then when Wayne walks by a few minutes later, he fails to see it and just carries on.

On the other side of the coin they have a coach full of locals who set off to go play the arcades on a day trip, but on their way they all stop to pat the lucky dog. They have a great day and they all win more than they normally would. Derren explains that it is their belief alone that enables them to spend more time and effort focused on the game play and so do better. While they attribute it to “luck”, they simply focused.

My favorite moment is when the local media arranged for “Britain’s favorite Psychic”, Sally Morgan, to stop by and come visit the dog. It is hilarious, they have her on camera explaining that from the moment she stepped out of the car she could feel the “energy” – remember it is all fake, and so is she, so we can see that she is apparently quite happy to jump on any media bandwagon that is rolling.

After three months of all this they finally have the big reveal. Derren comes to town to hold a town-hall meeting where he explains what has been going on. He is quite clearly nervous about this, but does it gently and also finishes with Wayne betting his life savings on the roll of the dice. It is Derren the illusionist, so as I’m sure you can guess it has a good outcome. After the dust has settled the local are interviewed commenting, “OK, it was fake, but so what, something good came out of it all for lots of people simply because they believed in themselves for a change“.

What strikes me about all this is how easy it is for a fictitious belief to take root. Yes I’m thinking about religious belief, but is just as true for any supernatural belief. You often come across decent honest individuals who tell stories of how belief X has changed their lives and recount an amazing tale about the power of belief X. This was just as true for all those who truly believed in patting the lucky dog. For example, the local toy store owner recounts a tale about how his luck changed after patting the dog. He had just received a bill he could not pay and then after patting the dog, he had the very best week ever in his shop and took in enough to make the payments … all down to the power of the “fake” lucky dog. This is of course why skeptics tend to discount personal stories, individuals may indeed truly believe, but it says nothing about the reality of such beliefs. Only objective empirical evidence can be relied upon.

Curious to watch? well you can … here is a link to it on YouTube … enjoy, its about 47 minutes and very watchable and entertaining. (Apologies to non-UK viewers, I suspect the link might not work outside the UK)

Now, to all you skeptics out there, some of you might wonder where Derren stands on things “skeptical”? Well, you need wonder no longer, because he is indeed a skeptics skeptic. Here is an interview that Richard Dawkins did with him a couple of years ago … Richard asks him about cold reading, psychics and Derren’s non-belief. Derren explains how the tricks are done. Its an education in itself just to watch that interview, but don’t forget the watch the luck show as well.

6 thoughts on “Derren Brown – Experiments … the secret of luck”