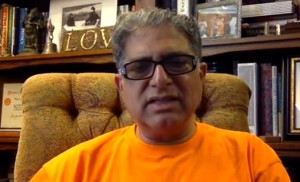 Sharon Hill over at Doubtful News reports on Deepak Chopra’s latest bit of shenanigans, he has a new challenge that he has targeted specifically at James Randi as follows …

I challenge the non “amazing” Randi & his professional debunkers & skeptics to explain normal experience & offer them a $1 million prize.

Yep, here is the man himself …

It is the usual nonsense … “How does electricity going into the grid become an experience in a three dimensional world in space and time. Prove that and you get a million dollars“. We also have to publish an explanation of consciousness in a peer-reviewed journal, and apparently the problem he feels we have is that we are bamboozled by matter.

So what is really going on here?

This is simply his attempt to distract people from the rather embarrassing observation that he makes rather a lot of weird claims, and has exactly zero objective evidence for any of them.

The context of all this is that James Randi has had a $1 Million Dollar challenge running for many decades now that offers to pay out to anyone who can demonstrate a supernatural or paranormal ability under agreed-upon scientific testing criteria. Over a thousand people have applied to take the challenge, but none has yet been successful.

I’ve personally sat in on several tests, and have seen that it is indeed totally fair and open. Those taking part and treated with great respect, and judgement is suspended. If indeed the test was actually passed then that would be a truly fascinating discovery, but every time it has been a fail, much to the great surprise of those who try.

Those who do go forward for testing are truly convinced that they have a gift, and rather sadly have simply fooled themselves, and so when tested under totally impartial controlled conditions, nothing is manifested.

What is rather interesting to observe is that those that refuse to take part are the professionals. The big name psychics, and purveyors of woo such as Deepak, when faced with the idea of taking part in a totally impartial test, rapidly duck and run for the hills – apparently they are too busy or too important to actually prove their claims. You would think that it would be in their interests to prove their claims, but the truth is that they are rather more interested in maintaining the rather lucrative flow of income that they fraudulently scam out of desperate people seeking hope.

There are essentially different categories here, there are individuals who truly believe in what they promote, and also outright frauds who know it is a scam. I tend to lean towards the thought that Deepak truly believes his own press, but I’m not really sure.

So there are a couple of key points here:

Does he really have $1 Million to pay out? Yes he does, he has successfully conned rather a lot of money out of his followers, but of course this is not a real test just his latest PR stunt.