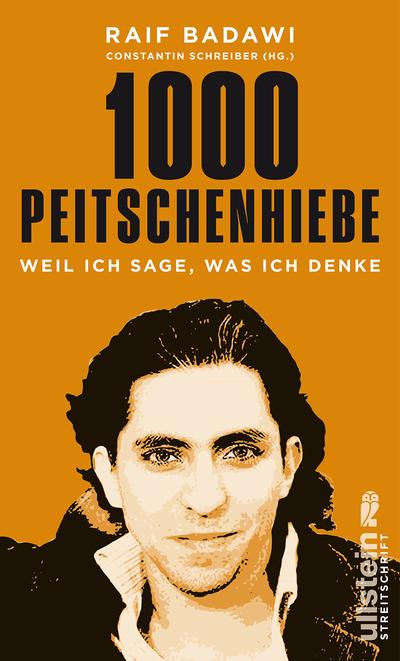 Raif Badawi, who was sentenced to 10 years in jail and to also be whipped in public every Friday for simply blogging criticism of the religious clerics in Saudi Arabia, has a new book published today … (sorry but in German).

It is entitled – 1,000 lashes: Because I say what I think – and the description (translated) reads …

Raif Badawi, a Saudi blogger, shared his thoughts on the internet about politics, religion and freedom. For this he was sentenced to 1,000 lashes and ten years in prison. This pamphlet brings together the central, forbidden texts written by Badawi. They show the tensions between a traditional interpretation of Islam and the right to an independent life today. Badawi calls for liberalism, tolerance, pluralism, freedom of expression and human rights – otherwise the Arab-Islamic world is lost. Within this book Raif Badawi has also written about his life in prison. The publication of this book is a non-profit project for the benefit of the author.

About the author and other contributors

Raif Muhammad Badawi (born 1984) is a Saudi intellectuals and Internet activists. In 2008 he founded 2008 the online forum “The Saudi liberals”, a website about politics and religion in Saudi Arabia, which was shut down by the state. Since 2012, he has been in prison and was flogged publicly on January 9, 2015 in the forecourt of the Al-Dschafali Mosque in Jeddah.

Constantin Schreiber (born 1979) is a lawyer and journalist. He is fluent in Arabic and from 2006 to early 2009, a correspondent for the Deutsche Welle in Dubai. He was then in the Foreign Office responsible for media projects in the Arab world in Berlin and since 2012 is a moderator and managing editor at n-tv. In addition, he produced and moderated in Arabic a science program for one of the largest TV stations in Egypt.

I’ve not received word yet about an English edition, but I’m sure it can’t be far behind, and as soon as that is available, I’ll be grabbing a copy.

All the proceeds go towards supporting Raif’s family, so if you do speak German, then please do grab a copy, because this is a really good cause.

You might be wondering how he managed to write about his prison experience while still in prison. To answer that, what he did was to dictate it all to his wife during phone calls.

Some concerns have been raised that the publication of the book may have a negative impact for Raif. This has been specifically raised by the GermanForeign Ministry in Berlin, but Badawi and his wife believe that attention to the book will protect him …

“My husband sees this as a continuation of his work,” said Haidar SPIEGEL. “He is sure to fight for the right beliefs.”

We need to keep the spotlight firmly focused on Raif, and to send a clear decisive message to Saudi Arabia that this attention is not going to wane, but rather is going to grow, increase and persist, until they finally do what is right and moral and release Raif, who has been unjustly and immorally sentenced to 10 years in jail and 1,000 lashes for simply telling the truth and pointing out that the emperor has no clothes.

If you can read German, then do support him by buying the book.