OK, so most of this might already be known to you, stick with me here, there is a punch line coming at the end.

The Christian owner of a Michigan truck repair shop, Brian Klawiter, announced on his Facebook page that he would not hesitate to refuse service to an openly gay person or persons. His posting has since then been taken down, and so if you missed it, then here it is … 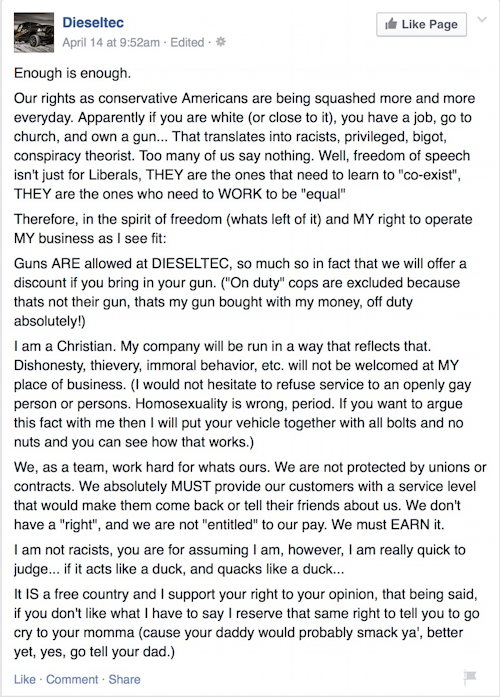 As you might imagine, the reaction this caused has been quite astonishing and positive, many have been coming out in support of the gay community saying, “No, you don’t get to do that, it is not right to discriminate like that”.

Their main supplier, Cummins, which makes the engines and parts for Dieseltec’s business, has asked them to have its brand and logo removed from Dieseltec’s website and marketing:

There was a GoFundMe page that was was started to drum up support for Dieseltec, and the very first donation was this one … 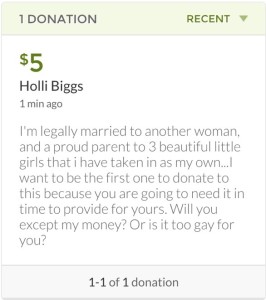 … and so that GoFundMe was quickly withdrawn.

The best was the open letter from a bankruptcy attorney

Jeffrey Mapes posted the following open letter to Dieseltec on his website, and it is in my opinion the very best response to all this …

Allow me to introduce myself, my name is Jeffrey Mapes, and I specialize in bankruptcy law — helping individuals and corporations when things go wrong. I noticed your post on Facebook where you decided to alienate most of the general public by stating that you will refuse service to openly homosexual people. This is certainly an unorthodox business strategy, and perhaps it will work for you, but I get the feeling you will need a bankruptcy attorney pretty soon and I wanted to offer my services. Like you, I am white, male, Christian, a business owner, and a gun owner. Unlike you, I provide services to everyone regardless of their sexual orientation because it doesn’t matter to me — I hope this won’t be a deal breaker for you.

If that upsets you, let me tell you a little bit more about our office to try and persuade you, The first thing you will notice is how friendly and compassionate the office staff is. Despite your inane, incoherent and just plain dumb comments, we know that everyone makes mistakes and we want to help you overcome them. They will also be more than willing to help you with some basic grammar that you seem to struggle with.

If you still need more convincing, let me assure you that we will make certain that your bankruptcy petition is filed correctly and there are no errors. You stated in your post that you would incorrectly assemble a vehicle in order to prove a point. I want to let you know that despite the fact that I would love to prove a point to you about tolerance, I won’t compromise my standards of quality to do so. After all, I have to look in the mirror at the end of the day and if I didn’t do my best for everyone, I would have trouble sleeping. Perhaps you could give me pointers on how you sleep at night?

Just a few other housekeeping items. While I certainly don’t encourage people to bring guns into my office, so long as you have the proper permit and handle it responsibly, you can bring your gun along. I would only ask that you refrain from menacingly stroking your weapon while you quietly sing David Allen Coe songs to yourself. I also think you have a deep and fundamental misunderstanding of the first amendment and how it works, but that is a long discussion and we should save that for when we meet in person.

Well Dieseltec, I hope I’ve convinced you that Mapes Law Offices is the right place for you to file your bankruptcy. I would like to leave you with some words of inspiration from the dramatic film Billy Madison and I hope that you will take them to heart:

“What you’ve just said is one of the most insanely idiotic things I have ever heard. At no point in your rambling, incoherent response were you even close to anything that could be considered a rational thought. Everyone in this room is now dumber for having listened to it. I award you no points, and may God have mercy on your soul.”

Now I did promise you a punchline

If you are perhaps thinking that those who took the human rights stance are just the usual liberal non-religious speaking up, then you would be wrong about that, because here is a follow up letter that Mr Mapes wrote …

I want to say thank you from the bottom of my heart to everyone who has had such positive things to say about the letter I posted to Dieseltec. The response has been overwhelmingly positive and it is heartening to know that businesses like the one at the center of this controversy are the exception and not the rule. That is not to say that all responses were positive. Many assumed that I must be homosexual because I support equality and treating everyone with dignity and respect. It is this idea that only gay people support gay rights that made me write the letter. You do not have to be gay to support equality, and until more heterosexual people stand up and let everyone know that treating people as less than equal is not acceptable, incidents like this will continue.

Among the emails I received yesterday was one from a former client who is homosexual. It is by far one of the most moving thank you notes I have ever received, and I have copied the pertinent parts below:

“Saw your open letter on facebook and really wanted to thank you for standing up.  Most people would not go on record like you have and it means so much.  My partner and I of 17 years get frustrated living in west michigan when I hear this kind of bigotry. I wanted to mention is during my bankruptcy, you and your office never made me feel like I had to hide who I was.”

No one should ever feel they have to hide who they are, life is difficult enough without having to pretend to be someone else. I truly believe that if everyone could just be themselves, we would probably have a great deal less depression, anger, and addiction in our society.

The post was certainly not intended to go viral, and I had no idea it would get this much exposure. It was written at 11:30pm at night when I couldn’t fall asleep and was reading the news in bed. For those who have just started following my blog because of this, I probably won’t be writing anything else on it but I do try to keep my posts fun and lighthearted so I hope you stick around for a while.

To Mr. Klawiter, should you read this, I hope you can change your views. I want to apologize for coming across as condescending, it was unbecoming of me. Like you I am a Christian, yet we have radically different views. I would just remind you what Jesus said  “‘Love the Lord your God with all your heart and with all your soul and with all your mind.’ This is the first and greatest commandment. And the second is like it: ‘Love your neighbor as yourself.’ All the Law and the Prophets hang on these two commandments.” Christ exhorted us to love our neighbor (all our neighbors) as ourselves, and perhaps part of your views stems from not loving yourself. With that in mind I will leave you with a quote from my favorite author, David Foster Wallace, in the hopes that you can gain some wisdom from it and perhaps change the way you treat others.

“[I]if you can think of times in your life that you’ve treated people with extraordinary decency and love, and pure uninterested concern, just because they were valuable as human beings. The ability to do that with ourselves. To treat ourselves the way we would treat a really good, precious friend. Or a tiny child of ours that we absolutely loved more than life itself. I think it’s probably possible to achieve that. I think part of the job we’re here for is to learn how to do this.”

Yes indeed, there is the punchline, Mr Mapes, like Mr Klawiter is also a Christian. The different here is that he is not a homophobic bigot, but instead chooses to treat all humans, regardless of their beliefs or sexual orientation, with dignity and respect, and for that I salute him.

It also points towards the world becoming a better place. There is a lot of stuff in the bible that is quite clearly morally wrong, for example the pro-slavery stuff, or the guidance that eating shellfish is an abomination. Most humans on the planet today who embrace the bible as truth can happily ditch all that because they recognise that is is not right, and so now many who do believe are also starting to take another step and recognise that the anti-gay rhetoric can be tossed into that same bin.