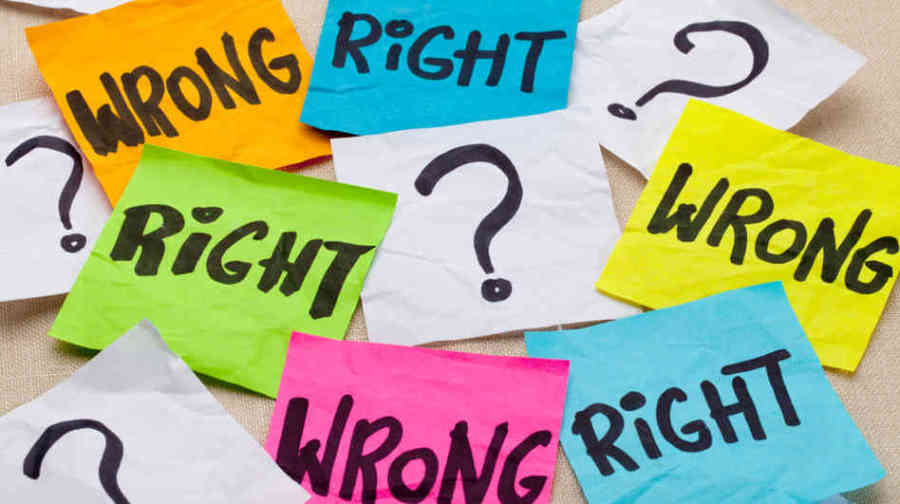 The rather common religious claim is that without the absolute values sourced from a god your morality is relative and can be whatever you want it to be. This apparently will then leave you free to do whatever you like if you decide that it is OK.

The counter argument is the rather obvious observation that there are no absolute religious moral values either, the thought that there are is a complete myth. Yes the bible and also the quran are books with rules (written by humans, not a god), and so when it comes to the claim that morality is sourced from these texts, there are two rather embarrassing facts …

Most religious people would never support the idea of either genocide or chopping off the heads of those that do not believe, they know that doing that is bad and not moral. So how exactly do they know that, because clearly their god has not condemned this, but instead supports it, so what is going on here?

What it does do is to demonstrate that their claim that a god is the source of their morality is simply not factually true at all in any way.

What do the non-believers say

The HuffPo has a nice little article. They asked a few famous atheists what the source of their morality was, and so here distilled from that full article is a quick summary …

This month, The Huffington Post UK has been uncovering the stories of people whose religious beliefs drive them to change society.

But these figures are the minority, according to our research which found that more than 60% of people say they are not religious.

One in eight Britons also said atheists tend to be more moral than religious people, compared to just 6% who say atheists are less moral.

We asked nine notable atheists, all members of the British Humanist Association, to tell us where they draw their values from in modern life.

I have only one principle, not even a moral one, really. Which is: to be as true as possible, both to myself and to some notion of objective reality, all the time. I say some notion, because a subsection of my only principle is: the truth is always complex.

What are the values and morals that guide your life?
The values of a typical twenty first century person, whether religious or not.

Where did your values originate?
They originated from a complicated and ever-changing mixture of conversations, writings, personal reflections, moral philosophy, legal transactions, parliamentary enactments, “climate of opinion”. Almost nobody today gets their morals from religious scripture, nor should they: just read the Bible or Quran and you’ll see what I mean.

“Everyone is born with an inbuilt moral purpose. It springs from mankind’s evolution as a social being, acting collaboratively, with altruism and good of the community hard-wired.

It needs no orders from elsewhere to tell people to be good – they know it already as a part of the human condition.

I am humanist because none of the faiths have produced any reliable evidence for me to be anything else. My study of history has convinced me that man has invented God, not the other way around.

“As an atheist, secularist and humanist I believe that reason, science and ethics – not religious superstition and ancient holy texts – are the best way to understand the world and promote human rights and welfare.

“Human rights law is the embodiment of these principles. It is man-made, not god-given; being the end result of rational and moral thought and debate. Unlike inflexible religious dogmas, it has evolved over time from basic principles to the inclusion of new rights such as those of disabled and LGBT people.

My credo is about honesty to one self in ethical issues and rational thinking about the world and the self. In interpersonal relations one needs honesty and consideration for other people’s feelings.

I’m always perplexed by those who believe that in order to have a moral code it is necessary to have a religious belief – it seems to me astonishing that people would have to look up what is morally right and wrong.

Professor A C Grayling, philosopher and master of New College of the Humanities

What are the values and morals that guide your life?
The humanistic outlook, which asks us to base our thinking about what lives are worth living, and how best to relate to our fellows in society, is premised on the idea that we should start from our most generous and sympathetic understanding of human nature and the human condition. This is the approach to ethical questions that I take.

Lord Warner, Labour member of the House of Lords and minister for health from 2005 to 2007

What are your beliefs?
Do unto others as you would be done unto; be on side of individuals and underdogs, not big organisations; challenge elites; have a small set of ethical red lines not prepared to cross; forget about the afterlife and concentrate on the now.

The following has been written & produced by the British Humanist Association, and narrated by Stephen Fry.