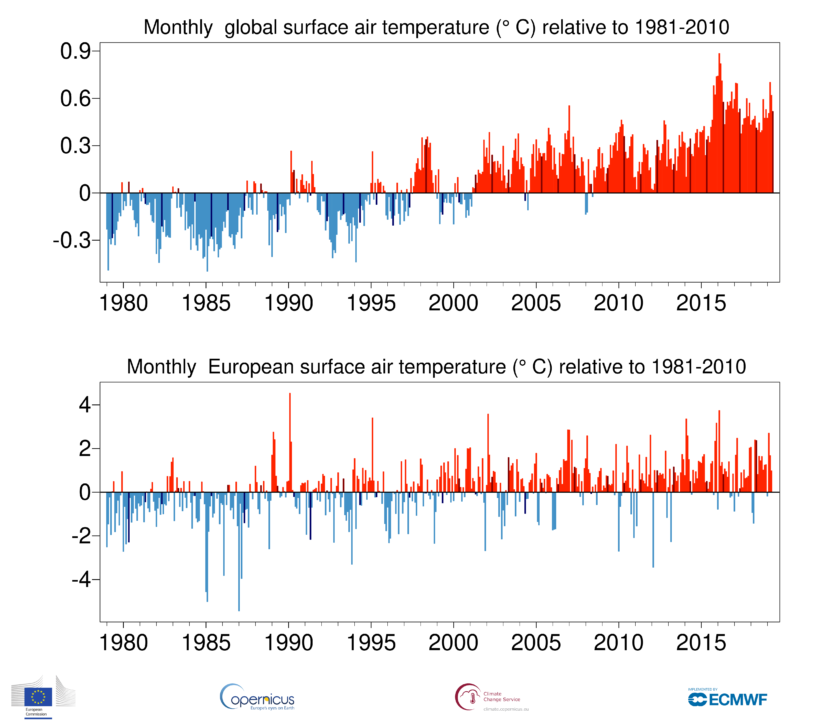 Now that we are into June the statistics for May are starting to become available. So what are the indicators, what will we learn about the climate from May 2019?

The global mean temperature in May 2019 was more than 0.5°C warmer than the 1981-2010 May average, ranking among the top three warmest for the month of May since 1979. Europe as a whole saw temperatures very close to average, albeit warmer than average over the Iberian Peninsula and the far east of the continent and colder than average in-between. Temperatures were well above average over parts of the Arctic (Greenland, Baffin and Ellesmere Islands, Alaska) and over the Weddell Sea, near Antarctica.

Temperatures averaged over the twelve-month period from June 2018 to May 2019 were:

There is more variability in average European temperatures, but values are less uncertain because observational coverage of the continent is relatively dense. Twelve-month averages for Europe were at a high level from 2014 to 2016. They then fell, but remained 0.5°C or more above the 1981-2010 average. Twelve-month averages have risen since then. The latest average, for the period from June 2018 to May 2019, is about 1.2°C above the 1981-2010 norm. The warmest such period, from April 2018 to March 2019, was 1.5°C above average.

What Comes next? – Greenland melt .. perhaps.

A heatwave has suddenly borne down on millions of people, killing several as the temperature passes 50C Celsius.

The thermometer hit 50.6 degrees Celsius in the Rajasthan desert city of Churu over the weekend, the weather department said.

All of Rajasthan suffered in severe heat with several cities hitting maximum temperatures above 47 Celsius.

And there is also this …