Boing Boing reports that Jack Chick, the Father of the Satanic Panic has passed away at the age of 92. You might, or perhaps might not, be familiar with him. What can be said is that he was both a good comic artist and also a highly effective communicator, but was quite frankly way out on the fringe of Christian fundamentalism because he vigorously promoted some truly eccentric beliefs.

His world was one in which things such as Dungeons and Dragons was a gateway into Satanism, and Catholicism was some huge conspiracy that  was responsible for the creation of Islam, The Mormons, and also the Jehovah’s Witnesses. To stop there would be doing him a grand disservice because he also maintained the stance that the Catholic church was responsible for the Holocaust, the founding of Communism, Nazism, and the Ku Klux Klan; starting the World Wars; masterminding the 1917 Russian Revolution, the Great Depression and the assassinations of U.S. Presidents Lincoln and Kennedy.

Lest you still fail to grasp just how whacky this guy was, he even took a pot shot at well known Iconic Christian author C.S.Lewis within his Dark Dungeons tract as an “occult author” … and I’m not exaggerating, here it is …

He was eventually persuaded to retract that, and so later editions have that 1984 reference purged.

To communicate such conspiracy thinking he created a series of very popular illustrated tracts that are well-crafted to emotionally manipulate and hence are a tad light on facts (think of them as reality-lite). Chick Publications claims to have distributed over 750 million of these and also claims to have translated them into 100 languages. I do personally remember many of them, they were a hoot and quite entertaining. I might indeed have been born and educated in Ireland and also at the time attended a school run by no less than Opus Dei, so you might perhaps anticipate that officially he was not exactly part of the curriculum. This was the forbidden fruit packaged up into comic form and so that turned these tracts into the must-have icon for some. Does this imply that he was actually persuading anybody? Well no not really, it was entertainment. We might all be mesmerised by The Walking Dead, but almost nobody watching actually seriously believes that Zombies are real.

Around Jack Chick two very distinctly different communities emerged. Firstly there is the rather obvious fundamentalist community who use his tracts to promote their beliefs. But also rather surprisingly there now exists another quite different community. Comic fans share and distribute his tracts simply for the enjoyment of it all because it is such whacky eccentric stuff. There is even a group of gamers who got together and started a kickstarter to make a film adoption of Dark Dungeons. They managed to raise $25,000 for that. It is not as a parody, but a direct copy because there’s no way they could’ve made it funnier than the real thing. In other words Jack Chick tracts were often so utterly weird that they were a parody of themselves.

If you do perhaps doubt the criticism, then below I am cutting and pasting a few gems from this RationalWiki page …

The Characters he drew …

Chick also practiced other stereotyping in that many of his negative characters are overweight, and that virtually any overweight person in a Chick tract is bad. Thus overweight people join the large number of groups on Chick’s bigotry hit parade.

The march of the strawmen …

Most of his work follows a standard formula generally involving a highly caricatured straw man version of an atheist, Jew, Catholic, homosexual or some other “sinner“. Average Joes/Janes who are completely ignorant of even the basic tenets of Christianity despite living in the western world also frequently show up (“who’s this Jesus guy I keep hearing about?”). These ne’er–do–wells then get theologically pwned by either a clean-cut kid who just fell out of a 1950s sitcom or a little old church lady. The sinner then either repents, generally losing whatever worldly position they had as a result, or ignores the proselytizing and ends up in the Lake of Fire, while the Christian kid/little old lady go on to eternal salvation. “Death is probably the most common event seen in Chick tracts, next to falling on the floor and reciting The Sinner’s Prayer with a tear drop of sincerity.”[12]

Around 1980, Chick discovered King James Only and anti-Catholicism and published several more Crusader comics blaming the Catholic Church for everything from communism, Satanism and human sacrifice to the American Civil War, the assassination of Abraham Lincoln and John F. Kennedy and finally the Holocaust (which was somehow also the fault of the evolutionists). Several of his early titles: Why No Revival?, The Beast, The Last Generation, have been extensively revised from their original versions, mostly to incorporate Chick’s anti-Catholicism into the later editions.

Chick appears to think that the Roman Catholic Church is part of a satanist conspiracy to overthrow God’s reign on earth. Or…something.[13] His claims about the Jesuits, for instance, include that they were responsible for the creation of the Qur’an, they tutored Karl Marx, started the Soviet Union and even got the Tsar’s gold as a reward.[14] Jesuits controlled the Gestapo and were responsible for the Holocaust, and somehow this is being deliberately withheld from the American people because of the seemingly infinite influence of the Catholic Church on the media.[15]

… and some of his stuff is quite sick …

Jack Chick’s sickest tract is arguably Lisa, which has a disgusting enough start then progresses to one of the filthiest endings in history that makes Carrie[wp] look mild. It is now unavailable in print and isn’t on chick.com either, for some reason. However, the blog Jack Chick’s Funnnybook Gospel has it archived with their own commentary, and we have a scanned copy of it for perusal: pages (1), (2), (3), (4). You have to read this thing to believe it. Remember: raping your children is fine as long as you accept Jesus as your personal savior! And it only takes 10 minutes! The tract was also the inspiration for the punk rock narrative “Lisa’s Father (Waka Baby)” by the punk band Alice Donut. The narrator of the piece begins by saying he was handed the tract by a door-to-door evangelist.

Trust Me, which still is available on chick.com[33], is almost as sick, depicting a brutal rape as lowbrow comedy.

What is perhaps truly heart warming is that he lived long enough to see his paranoid delusional thinking become utterly irrelevant. Dungeons and Dragons has had its day and nobody is seriously buying into the satanic panics anymore. Within fundamentalist circles Catholicism is no longer the enemy, and instead is a group to work with on common issues. Nor is homophobia as pervasive as it once was within evangelical circles, there is now a growing acceptance amongst the younger generation for LGBT rights. Mr Chick’s real home is now perhaps relegated to Salem in the 1600s.

Yes, he was both a good comic artist and also a brilliant communicator, but we should also not forget that what he was communicating was absurd paranoia and completely hateful bullshit. The essence of his message was not simply one that promoted some rather extreme views that do sadly still prevail within some strands of the religious right, but was one that stoked up a hatred for evolution, feminism, and LGBT rights. He quite literally delighted in the very existence of AIDS as the manifestation of the wrath of god and demonstrated no empathy at all.

RationalWiki sums up his tracts as follows …

As a general rule, his tracts read like the ramblings of a paranoid schizophrenic and make Pat Robertson look sane and mellowed out in comparison

His contribution to the world is that he has now made it a truly better place by simply leaving it.

Below you will find an example of his art. Yes, I suspect that chick.com might potentially object and claim copyright, and if they do, then I’ll take it down. I would however add that what I’m posting falls under the remit of Fair Use, so they will need to justify why that does not apply.

Here is his anti-evolution tract “Big Daddy” which I should warn you, is highly misleading and downright dishonest  …

… and so on. If curious to see the rest, then you can click this link.

Read it all and you will discover  pure grade-1 gold-plated religious BS that dismisses scientific fact as myth and instead asserts that religious myth is fact by making some quite frankly silly claims that have exactly zero basis in fact. 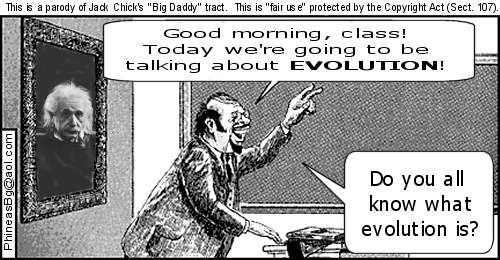 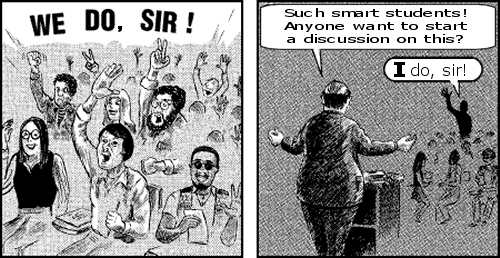 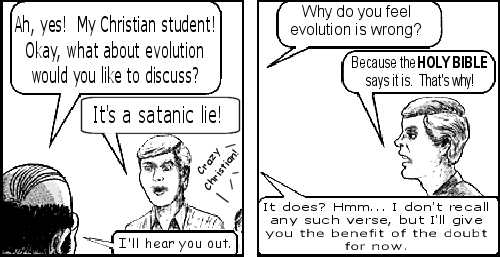 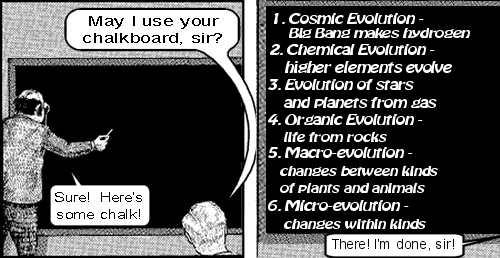 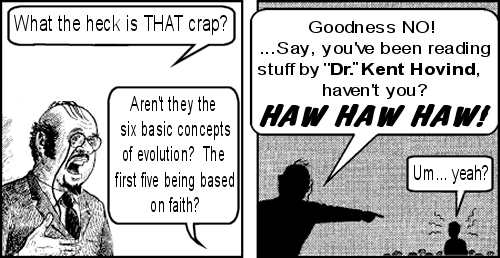 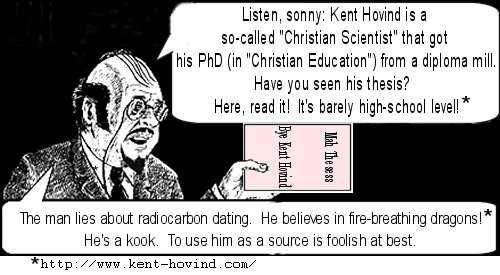 If curious to view the full parody rebuttal, then click here.

Perhaps in some ways the passing of Jack Chick closes the page on an era where much of what he promoted was popular. His comics will remain popular of course, but not for religious reasons. Instead a new generation now delights in the pure quirkiness and gothic eccentricity of it all as desirable collectors items from a bygone era.