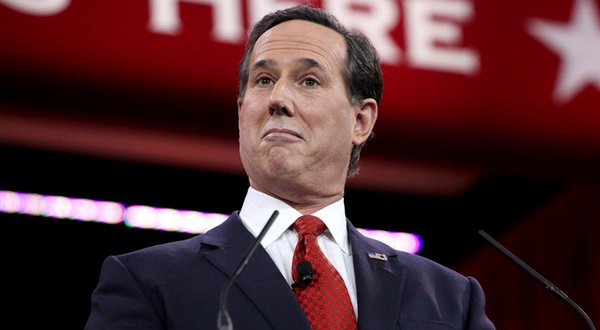 In a truly bizarre twist, Rick Santorum, the self-appointed representative of the folks who claim to hold the high moral ground, is claiming that equality will destroy the moral foundation of the world. Over in the HuffPo we learn this as follows …

During an appearance on CBS’ “Face the Nation,” Santorum doubled down on earlier comments he’d made about the ruling, when he claimed Justice Anthony Kennedy, who wrote the opinion in Obergefell v. Hodges, is “potentially disrupting the foundation of the world.”

On Sunday, Santorum said the U.S. is “still the moral leader of the free world,” but argued the Supreme Court had done wrong by making marriage about more than just procreating, saying it’ll have “profound consequences” worldwide.

“Marriage is no longer about kids, it’s simply about adults,” Santorum said.

Santorum also argued it’s best for children to be raised with both a mother and father, saying it’s “not a good situation” that more children are being born out of wedlock.

OK, so let’s pick this apart.

Point 1 – the US is not the first nation to endorse same-sex marriage, because as noted on the Wikipedia page on the topic, all these other nations have already done it …

… and (gasp!) the sky has not fallen in, nor has their weather transformed into even the slightest hint of fire and brimstone. The truth is that when it comes to a moral foundation, a rather basic principle is equality, and so it is the US that is playing catchup.

Point 2 – his stance is not a moral one. When you are promoting bigotry and discrimination as an ethical principle, then you are more or less erecting a big bright bold flashing red neon sign that announces that something is seriously wrong with the way you work out what it right and what is wrong. He is of course after right-wing Republican votes and so it might be tempting to consider he is simply saying this stuff in order to garner support, but alas no, this is a deeply religious guy, and so there rests the root of his problem. When you put aside compassion, reason and empathy, and instead utilise dogma for ethical guidance, then the end product is always a disaster. I should add that not all religious people are like this, because many do permit compassion and reason to prevail, but if indeed the emotional investment in the belief is sufficiently strong, then the dogma can instead potentially trump empathy.

Point 3 – he claims that it is best for children to be raised by male-female couples and yet offers no supporting evidence for this claim, he simply states it to be a fact. The ever so slight flaw in his claim (one that others also promote), is that it is simply not factual because the evidence available conflicts with this claim …

The best study so far, Siegel tells BU Today, is the National Longitudinal Lesbian Family Study, begun in 1986. The study has followed 154 lesbian mothers and recently checked in on 78 adolescent children, comparing the mothers’ and kids’ self-reported status against national standardized samples.

The lesbian mothers’ reports of their children “indicated that they had high levels of social, school/academic, and total competence and fewer social problems, rule-breaking, and aggressive and externalizing behavior compared with their age-matched counterparts,”

… Siegel and Perrin’s report also cites three studies done in the United States and Europe—two involving lesbian mothers and the third one involving men and women whose adult children reported they’d had a parent involved in a same-sex relationship. Those studies similarly found no difference in outcomes for the children as compared with children of heterosexual parents.

Historically we have of course been here before. When humanity was coming to terms with the idea that slavery was not such a great idea there were many people who opposed that idea for religious reasons  …

[Slavery] was established by decree of Almighty God…it is sanctioned in the Bible, in both Testaments, from Genesis to Revelation…it has existed in all ages, has been found among the people of the highest civilization, and in nations of the highest proficiency in the arts.

Every hope of the existence of church and state, and of civilization itself, hangs upon our arduous effort to defeat the doctrine of Negro suffrage.

… the right of holding slaves is clearly established in the Holy Scriptures, both by precept and example.

The rhetoric that people such as Rick Santorum promotes these days in so many ways reminds me of the above pro-slavery rhetoric.